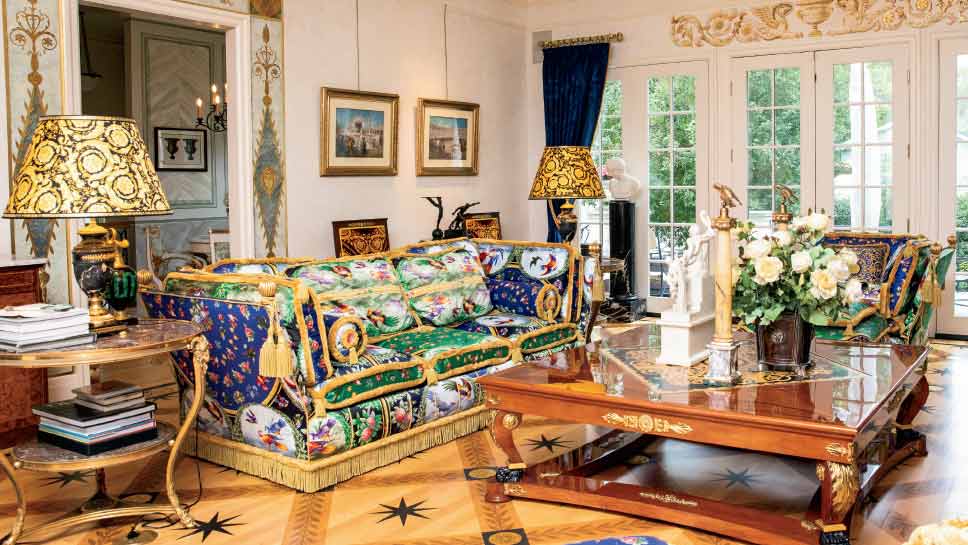 On the heels of our September tribute to Gianni Versace’s finest fashions, we go inside the Hinsdale home of Chuck and Diana Ivas to see a rare collection of the designer’s furniture and accessories. Our own West Suburban version of Versace’s Lake Como villa awaits.

For Chuck and Diana Ivas, Versace isn’t just a luxury Italian designer. His vision, his clothes, his creations, are a way of life.

The Hinsdale-based couple have modeled their personal home after the late Gianni Versace’s waterfront villa, Villa Le Fontanelle, in Lake Como, Italy, just north of Milan. Versace purchased Villa Le Fontanelle in 1977 and is said to have personally supervised its restoration and to have individually chosen each item in the interior. In 2008, the home was resold for $52 million to Russian restaurateur Arkady Nokitov, proving everything Versace touches only gets better with time.

The Ivas couple, in modeling more than just their home on Versace’s life, are also incredibly discerning about their interiors. But it wasn’t until a chance shopping encounter that they even understood the Versace style of living 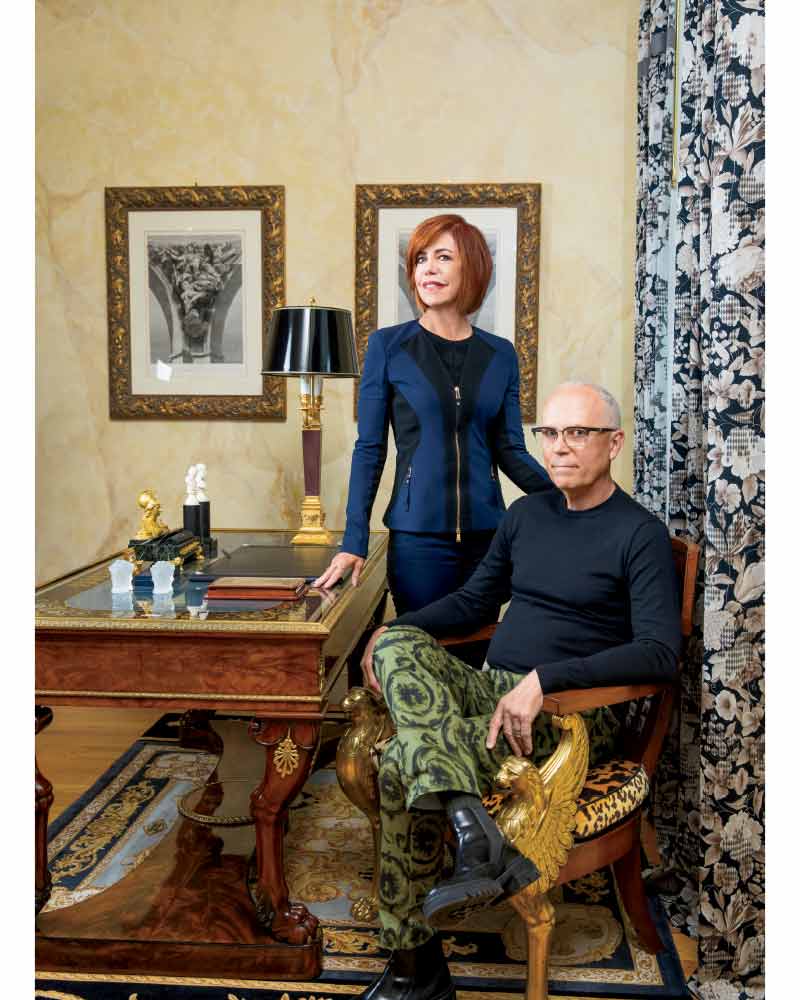 “I originally wanted to build a home in the French Art Deco style using Pierre Trudeau’s home as a model,” says Chuck. “It was going to be French limestone with tall, narrow windows. But I wasn’t sure if that type of home would fit in to the style of Hinsdale. Diana and I were in the Versace boutique in Chicago on Oak Street and while Diana was trying on clothes, the Versace team handed me a book on Versace’s houses, which I had never seen before. Once, I opened the book, I was awestruck by his taste, and this is when I decided on the style of home to build in Hinsdale.”

The couple had already been living in Hinsdale and owned a lot to build on. Prior to selling real estate, Chuck had been an interior design contractor working in a myriad of styles. “Having that experience in decorating made it easy for me to design for myself,” he says. “The process was not as hard as I thought it would be, and I discovered that I loved the neoclassical style.”

The Versace style, as described by Diana, is very flamboyant and incorporates lots of color. The Ivas house follows that same line of thinking but on a smaller scale. Chuck and Diana have collected more than 50 Versace furniture pieces that were owned by Gianni from his homes in Miami, New York, and Lake Como.

Their colorful Salon Suite from the Miami mansion was one of their very first purchases of Gianni’s items at the Sotheby’s auction in New York after his death and is one of their favorites to this day. They also have a soft spot for the six paintings from his Lake Como villa that are on their first floor; the leopard sofa and club chairs from the Miami mansion in their master bedroom; and the desk from Versace’s bedroom in his New York townhouse. 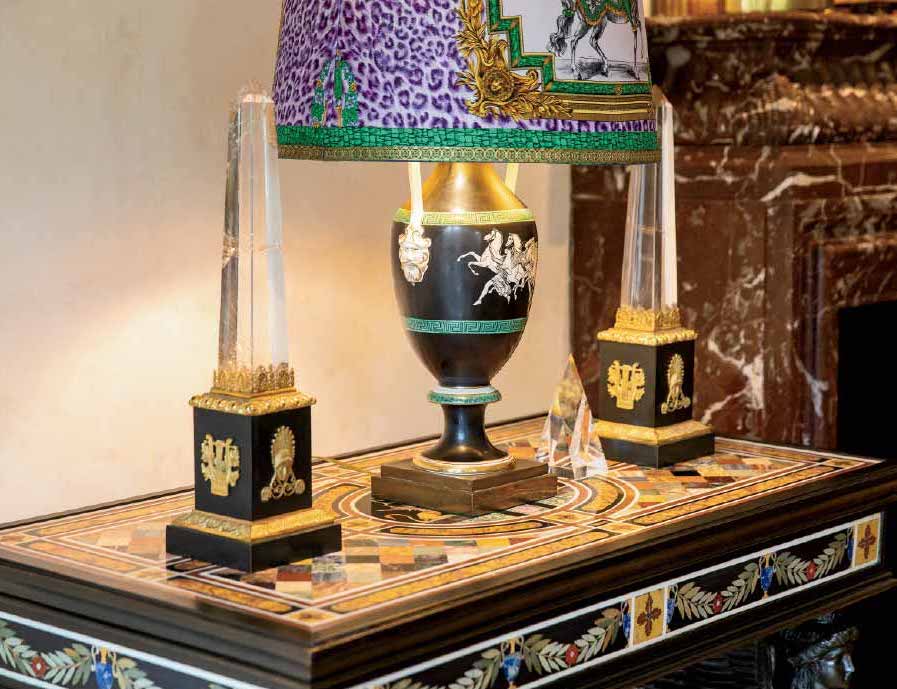 That particular desk cost the couple $45,000, the most they’ve ever paid for a Versace piece. But, they say they’re sure their collection has increased in value as they compare prices of recent pieces like theirs that have sold at auction. “It’s sort of like doing a comparative market analysis for selling a home,” explains Diana.

The process of securing highly-coveted pieces at auction can be intimidating, and the couple has had some fun and interesting experiences. They’ve bid against hip-mogul Russell Simmons and against tennis star Anna Kournikova and her mother, Alla. At their first auction, they were even later featured on television series “The Incurable Collector.” 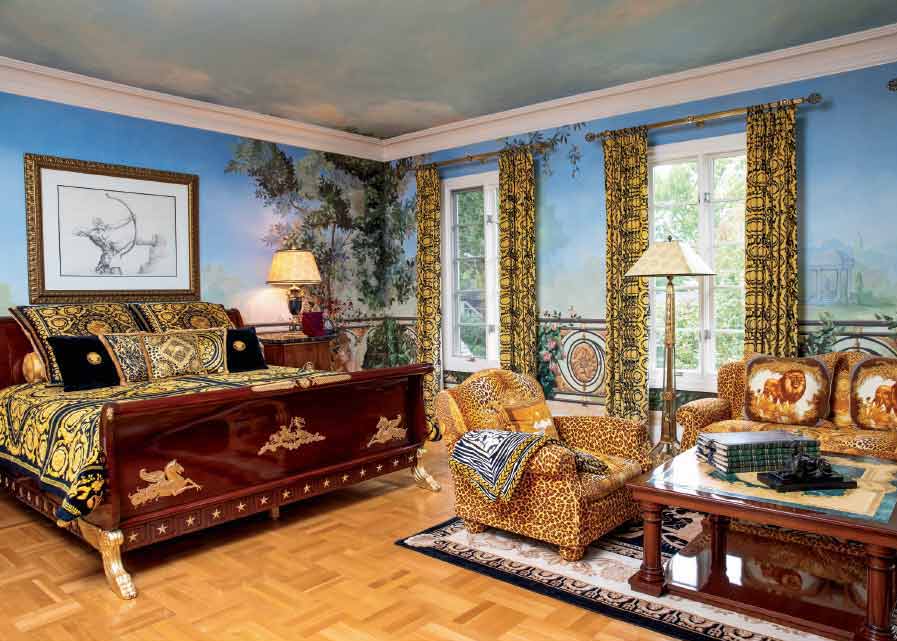 One of their most important pieces is a chair they purchased at auction from The Delbee Jansen Estate in Paris. The piece was commissioned by Napoleon’s architect, Charles Purcier, who is widely considered to be the inventor of the Empire style.

But Diana explains, Chuck surfs the internet constantly for pieces. “Right now, he has his eye on some pieces from the Grand Tour, which are Greek bronze urns,” she says.

And while they love other designers, too, like Karl Lagerfeld, Balmain, and Ralph Lauren, none compare to Versace. “We are addicted to wearing Versace,” says Diana. “The style is edgy, and the architecture of the clothes is amazing for both men and women. And I must mention that his women’s shoes are surprisingly comfortable, although they’re very edgy and oftentimes have a very high heel.” 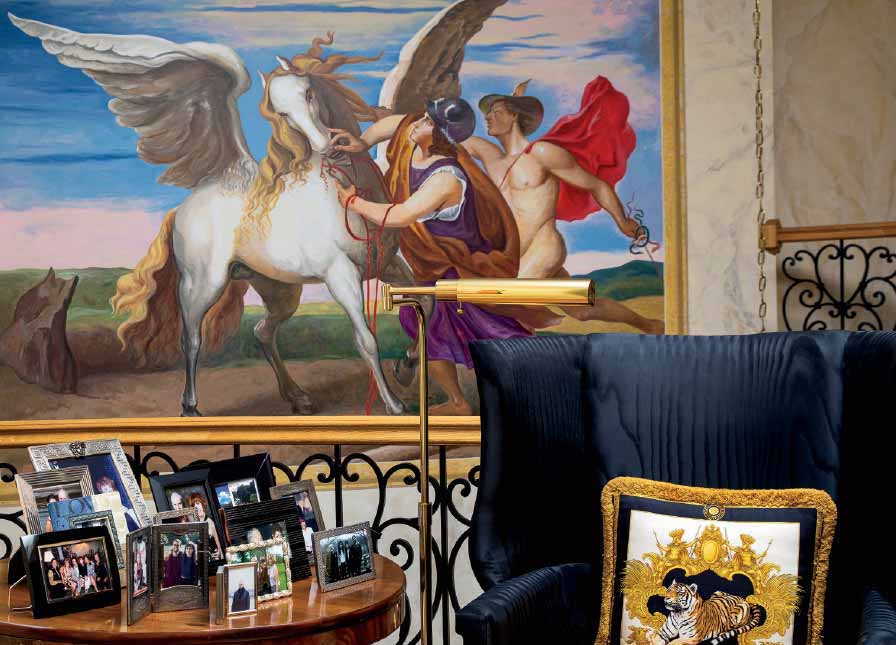 Recently, the couple hosted the Tribute Collection event at the Versace store in Chicago with the proceeds benefitting cancer research through the Patty’s Pals foundation. “Because Chuck is a cancer survivor and because one of our clients has a foundation for cancer research in honor of her sister she lost to cancer, we felt this evening was an appropriate venue for proceeds from the sales that night to go to this worthy cause,” says Diana. “The Versace staff was most pleased with the turnout, and our client was overwhelmed by the support and donation.”

In a fitting turn of events, it would seem the Ivas couple gives back to Versace just as much as the brand gives to them.