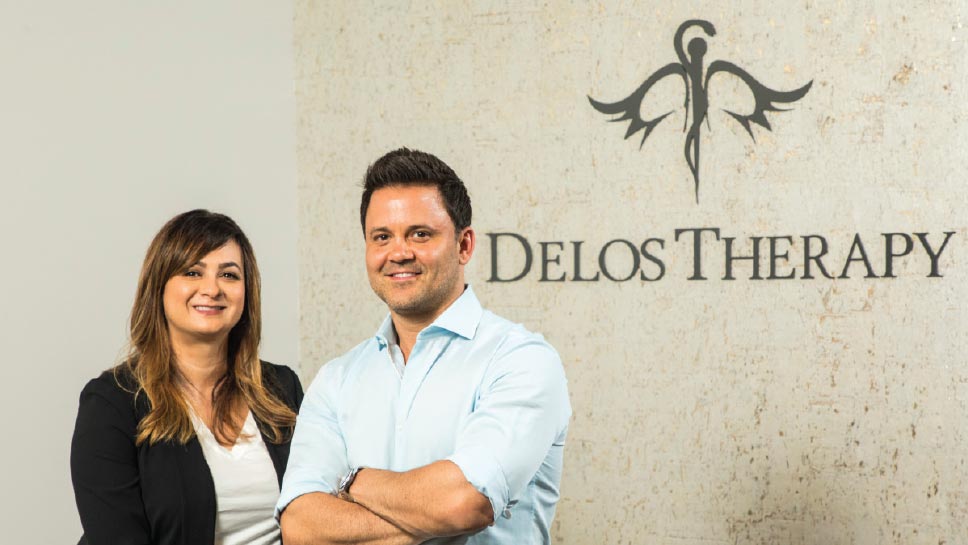 Anyone suffering from chronic pain would benefit from a visit to Delos Therapy, where a revolutionary approach to treatment can turn decades of pain and stiffness into a distant memory. PHOTOGRAPHY BY JOEL LERNER

Anyone who has been to Delos Therapy will tell you one thing: It’s different.

It’s different in its approach, its science, and its results. Many people experience chronic pain, and despite first opinions, second opinions, massage therapy, and physical therapy, sometimes the pain just doesn’t go away.

Until they visit Delos Therapy.

“There is clearly something getting missed when you look at most people who are 35 or 40 who are experiencing stiffness and pain. It’s one of the most common medical complaints,” says Eric Owens, co-founder of Delos Therapy and former professional athlete whose father invented the therapy. “The solutions out there are not that effective. Patients are trying so many things, and something is getting missed with traditional treatments.”

And here’s why. When you use a muscle repeatedly—that standard wear and tear from everyday use—your body is constantly depositing collagen into the muscle, making it hard. “Muscles should always be soft and spongy,” Owens says. This is contrary to what many people think. When you’re working a muscle, it should be hard, but when you relax, it should be soft. That’s called pliability, and it’s something that even professional athletes are talking more and more about, including NFL quarterback Tom Brady.

As you work a muscle, and collagen builds up, it makes it hard—leading to stiffness and often chronic pain. The issue is that MRIs don’t pick up these issues on imaging. “Everything structurally looks fine, but there’s a massive muscular component that because it’s invisible to imaging, nobody is diagnosing it.”

But Delos Therapy does. It focuses on the muscle and the fascia, and it breaks apart the dense collagen fibers so your muscles can move again.

“We have a therapy that’s unmatched when it comes to chronic pain,” says Mimi Bosika, co-founder, who has known Owens since they were kids. In fact, Bosika’s father was a U.S. Olympics coach for table tennis and well known throughout the world of the sport—which is the sport Owens practiced and excelled in for many years. He was inducted into the U.S. Table Tennis Hall of Fame in 2015.

Owens, who studied medicine in school, believes that muscular health is a lifelong commitment—mostly because of how he’s seen lives change from Delos Therapy. The first step when seeing a patient is to examine if the muscles are in a chronically contracted state, which they almost always are.

“We do a quick diagnostic scan—feeling them with elbows, forearms, and getting a map of the tightness. Then we start to break it up with pressure and do a little range of motion testing after 5 to 10 minutes. Then we do customized treatment plan over four weeks,” he says. “Muscles that have been tight for decades have a tendency to stay tight. But muscles respond to frequency.”

In other words, they respond quickly to treatment (or exercise), but they have the tendency to go back. That means to treat initial chronic pain, Owens recommends a regimen of three visits a week for four weeks, then once or twice a month after that to improve pliability. It’s very common to see 100 percent improvement over the initial four-week treatment.

Delos Therapy has around a dozen therapists working across four clinics in the Chicagoland area. “Most clients see multiple therapists, because we only hire the best of the best,” Bosika says. “They are career professionals, and they only work for us. They’re committed to our long-term goals and aligned with our vision.”

“There’s so much research happening in the world of chronic pain, and we know that something is being missed with conventional treatment,” Owens says. “The future of pain and stiffness and athletic performance all comes down to manipulating the muscles and fascia in a specific way.”

Delos Therapy is the place that’s deliver the highest level of treatment, service, and science to those suffering from chronic pain so they go from “I’ll never run again” to “I can’t wait to run tomorrow.”

Delos Therapy is located at 230 E. Ogden Avenue in Hinsdale and three other area locations, 312-600-7716, delostherapy.com. (Mention Hinsdale Living, and get your first treatment for free.)