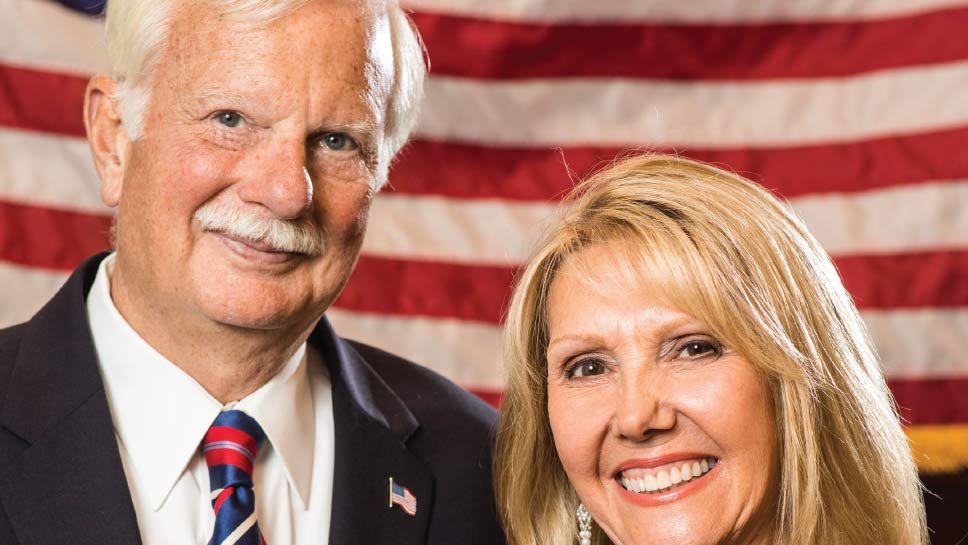 When it comes to supporting women and men who serve our country, no gesture is too small to make a difference.

Former U.S. Navy officer and Hinsdale resident Dave Pequet knows all too well how a little idea can have a major impact. Four years ago, he and his wife Chris founded the “Red White and Blues” patriotic gala to raise money for Operation Support Our Troops-America (OSOT-A).

What was meant as a one-time thing blossomed into an annual event that OSOT-A can now count on. This year’s gala on Saturday, October 27 features 1985 Chicago Bears Super Bowl Champion Gary Fencik as master of ceremonies. Vietnam Medal of Honor recipient and OSOT-A board member Allen J. Lynch will also be in attendance.

With $200,000 raised for the organization since 2014, Dave Pequet expresses gratitude for everyone in the community that has come together to make it possible. “Chris and I could not be more proud to spearhead this event again,” he says, explaining that in addition to his service in the Navy in the 1970s, Chris is the daughter of a World War II veteran. “The continued support of our friends and the community benefiting the mission of OSOT-A has been very rewarding.”

The “Red White and Blues” initiative the couple started is now its own volunteer-based nonprofit entity with a mission to support the morale and wellbeing of American forces by providing “comfort, resources, and education to them and their families both while they are deployed in harm’s way and after their return.”

In other words, the Pequets want current soldiers and veterans to know that they are not forgotten.

The partnership with OSOT-A has allowed them to impact more than 700,000 troops around the globe. “We are deeply grateful to the sponsors and supporters of this great event now in its fourth year. The proceeds have allowed us to impact thousands of veterans and their families as well as to provide much needed grief support for our Families of Fallen,” says Bill Rickert, executive director of OSOT-A. “The Red White and Blues gala also reminds the community that our military men and women still in harm’s way, protecting our freedom.”

Headquartered in Naperville, OSOT-A is a grassroots organization that has grown over the last 15 years to become one of the largest volunteer-based military support organizations in the country. More than 500 volunteers give more than 10,000 hours each year in service. In addition to the various veteran support programs OSOT-A offers, they have sent out more than 2 million pounds of care packages that have impacted over 700,000 troops worldwide since their inception in 2003.

“Chris and I can’t think of a more worthwhile organization to partner with in our efforts to give back to those who have given so much for our country,” says Dave Pequet. “The money raised at this event goes straight to where it’s needed most.”

This year’s “Red White and Blues” patriotic gala will be held at 7 p.m. in the ballroom at Pinstripes in Oakbrook Center. The Chicago Blues All Stars will provide live music and an impressive live auction promises one-of-a-kind experiences for a cause.

Tickets to “Red White and Blues” are $150 and can be purchased at redwhiteandblues.org.