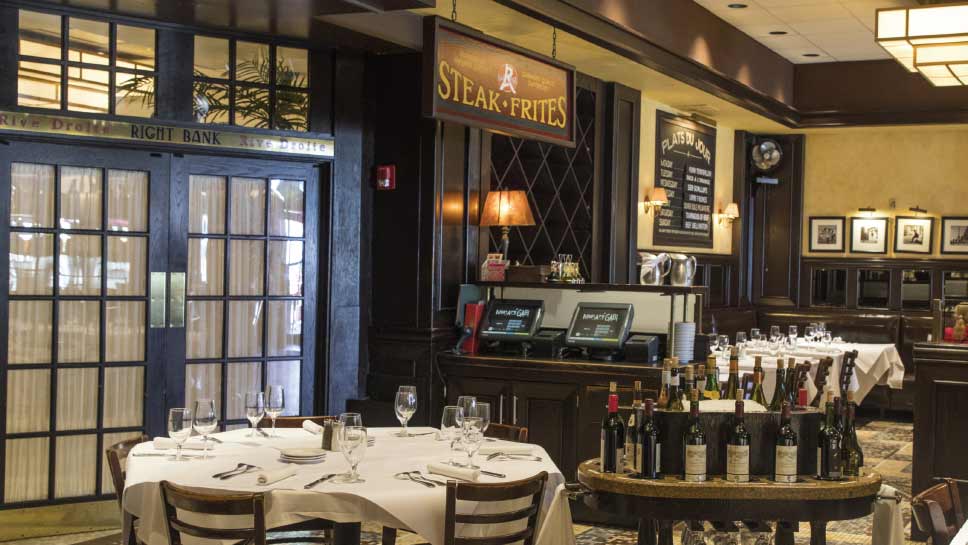 There are certain givens in life. Death and taxes immediately come to mind, as well as the inevitability that at least one string of holiday lights will always burn out each year.

But let us offer you one more assurance. There is nothing in this world—whether it’s a bout of back-to-school blues or the prospect of yet another losing season for the Bears—that a platter of steak frites from Mon Ami Gabi can’t make a little better.

Oak Brook Executive Chef Bruce Williams, who is celebrating his 20th year manning the burners for Mon Ami Gabi, still knows how to fire up those beauties the right way. Slices of top sirloin, pounded almost prosciutto thin, are seared to that magical point when the steak’s juices pool both inside and around the exterior of the steak. 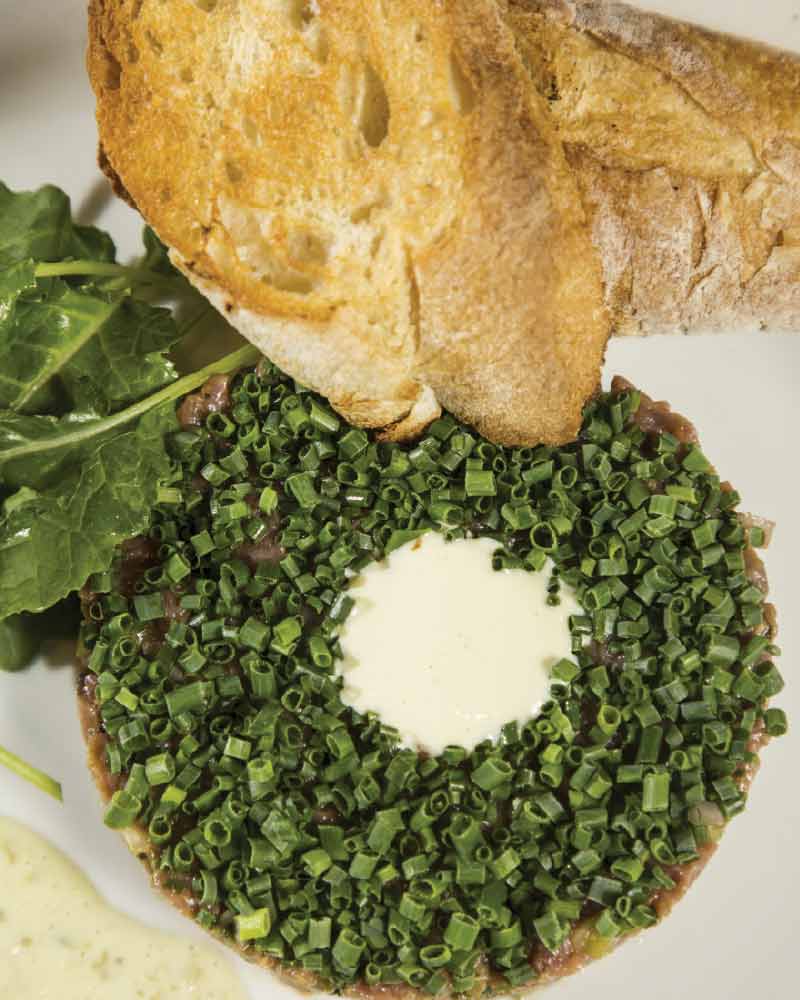 It’s a glistening work of art—tender, rich, and juicy—especially if you opt for the house’s bordelaise preparation, which seeps the whole affair in a red wine reduction and adds a topcoat of caramelized onions that taste like they’ve been rescued from a crock of French onion soup.

Add that saucy mélange to Mon Ami Gabi’s always crunchy nest of skin-on frites—spoon it on there if you have to—and you have something that has always struck me as a delectably primitive French take on Canadian poutine.

Mon Ami still gets many of the classics right, but what might be more appealing about the Oak Brook location is its history.

Often you’ll see Managing Partner Mark Sotelino, the scion of co-founder Gabino Sotelino, walking the floor. And a number of waiters and bussers have been here for all 18 years of the restaurant’s operation, each gleefully willing to spin yarns of days gone by. 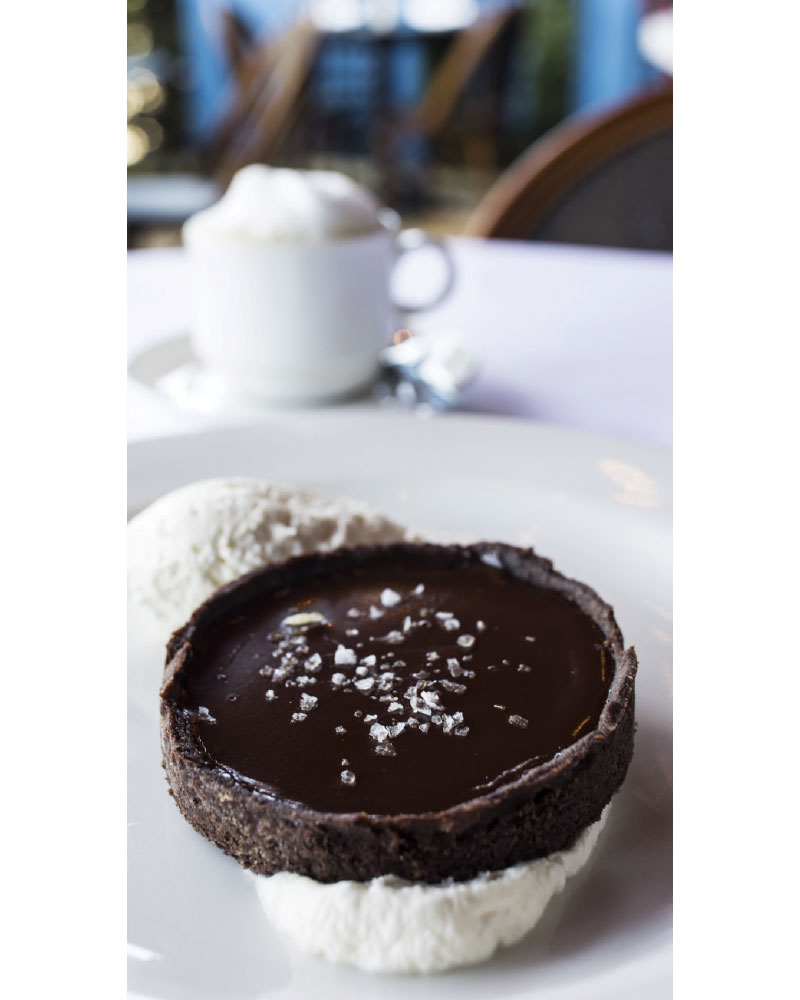 One of those great stories involves the history of the concept itself, a long-running partnership between Rich Melman of Lettuce Entertain You and founding chef Gabino Sotelino. Legend has it that the two men collaborated on the first true bistro in the Chicago area, a forebear to Mon Ami called Un Grande Café in 1981.

Mon Ami was re-concepted into existence 17 years later, inspired in part by a visit from legendary French chef Jean Banchet. When Banchet paid a visit one day to Melman and Gabino, he burst onto the scene in his typically ebullient manner, yelling “Mon ami, Gabi” (my friend, in French) in Gabino’s direction.

But what’s a bistro experience without a bit of duck confit? The house version is pure indulgence: sweetness, acidity and savory notes amped up to a fever’s pitch, thanks to a calvados glaze and a cherry-studded choucroute garnie that slices through the richness like a scythe through summer grain.

Some dishes have been modernized. The steak tartare still gets topped with a green layer of diced chives, but the piquant banana pepper aioli that’s folded into the mix creates a more nuanced undercurrent of spice than simple pepper.

The fact that all this is served in a dining room that refuses to yield to modern design trends, only adds to its charms. You go to Mon Ami Gabi not to be taken someplace new but rather to return to someplace you know all too well.

Which may explain why Mon Ami Gabi’s best entrees are old-school classics. The trout almondine, topped with bits of almonds instead of battered in them, has a timelessness to it: olive oil, nuts, tender meat, and crispy skin.

And then there’s deceptively charming chicken entrée: a gently roasted half bird moated with a chicken gravy, mashed potatoes, and a mélange of pearl onions and mushrooms. It’s French style chicken and dumplings: tasty and unassuming.

Ditto for Mon Ami Gabi’s desserts. The apple tarte tatin—think sugar, butter, and apples—is set on an ultra-thin layer of pastry dough is autumn on a plate, while the chocolate caramel tart is an old-school Milky Way chocolate bar in dessert form.

This is the way Gabino Sotelino and Rich Melman and Bruce Williams envisioned inexpensive French bistro fare so many years ago. And thankfully it’s the way it remains today, so many decades later.