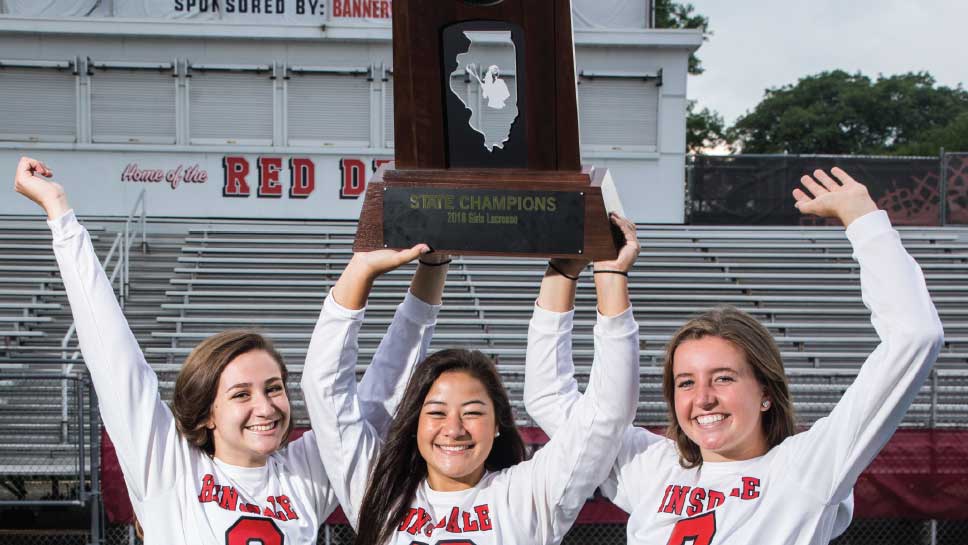 “I saw the trophy on the table. I picked it up and ran away,” Gelman says. “The coaches were like, ‘It just better be here for the banquet.’ I said OK. I buckled it in the seat belt on the way home and was taking care of it.”

This summer has been quite a ride for the Red Devils after a groundbreaking season. On their home Dickinson Field, they won the sport’s first Illinois High School Association state tournament by defeating New Trier 13-3 on June 2. That followed a resounding 8-5 semifinal victory over Loyola Academy, which had won nine straight Illinois High School Women’s Lacrosse Association state tournaments.

The Red Devils hadn’t beaten Loyola since their only IHSWLA state championship in 2007. “It’s amazing, unreal because we practiced so hard for that moment,” says rising junior Alaina Hamood. “Winning was surreal. I couldn’t believe it and it keeps hitting me in waves, like, ‘Wow, we won.’ It’s like the best moment of my life.”

Winning state at home exceeded expectations. Mulvihill was impressed by the “sea of red” in the stands from the usual parents but also numerous friends, some watching lacrosse for the first time.

“When we found out we’d be hosting we thought, especially for the seniors, what a great way to go out,” Mulvihill says. “You look around, having played there, practiced there, the number of hours spent there … and to see our team so happy on that field, that made the last game that much more special.”

Like New Trier and Loyola, the Red Devils annually have reached the state semifinals since 2006. But since their 2007 title, they finished second to Loyola in 2015 and 2011.

“Although we’ve been in the top four a lot of years, a state title really shows how good we are,” Pisani says. “Loyola and New Trier definitely have been and are powers in Illinois lacrosse, in boys, too,” Mulvihill adds. “Now we can say that we can hang with them.”

And defeat on consecutive days. The Red Devils lost to New Trier 11-9 on May 17 but controlled the finals behind seven unanswered goals after an early 2-1 deficit. Hinsdale Central led Loyola throughout the semifinals after a 3-0 start.

“It wouldn’t have been the same without beating both. It was so exhilarating. Looking back, it’s all a blur,” Johnson says. “Those have been our rivals forever. And usually we don’t come out on top,” Hamood adds. “The fact that we had to beat both to get what we wanted made it 100 percent sweeter.”

Hartman encouraged further bonding by going to breakfast or players’ houses to watch lacrosse footage.
One Saturday morning, Hartman cancelled practice but ordered the players to do something collectively. Another time, the coaching staff personally took them for breakfast at Patti’s Sunrise Café in Burr Ridge.

The road to success also included a two-block walk to the Collignon home for state pre- and post-game gatherings. At the victory party, the Red Devils circled and sang with “We Are the Champions” blasting from speakers, surrounded by parents, alumni, and plenty of sandwiches and mini-tacos.

“Moving from the field to my house was really fun. It just kept the celebration going,” Syd Collignon says. “The tears were immediate after the win on the field. The cheering and celebrating was at my house.”

Trophy sharing among players started at the banquet. Before returning for the start of school, the trophy has appeared in Hinsdale’s Fourth of July parade and throughout the Chicago area. The Collignons brought it to their grandfather, a season-long fan unable to attend state.

“It took a while for the championship to finally hit me, but every time I go around town, people know and they congratulate me and my team,” Mulvihill says. “It’s helped me to realize that we really did it.”