A running joke at the University of Michigan is that no jazz classes should start earlier than mid-morning. Incoming freshman Sherman Thompson says he was grateful that his high-school jazz ensemble and jazz lab practices at Hinsdale Central High School were held early enough for him to pursue his other passion—the high school club sailing team.

“I got really, really lucky with jazz being in the morning,” says Thompson, who practiced with the sailing team for four years at Chicago Yacht Club’s Belmont Harbor station. “We started sailing practice at 4:15 p.m. That only gave us about an hour and 15 minutes to get there so it demanded that we leave from school immediately.” 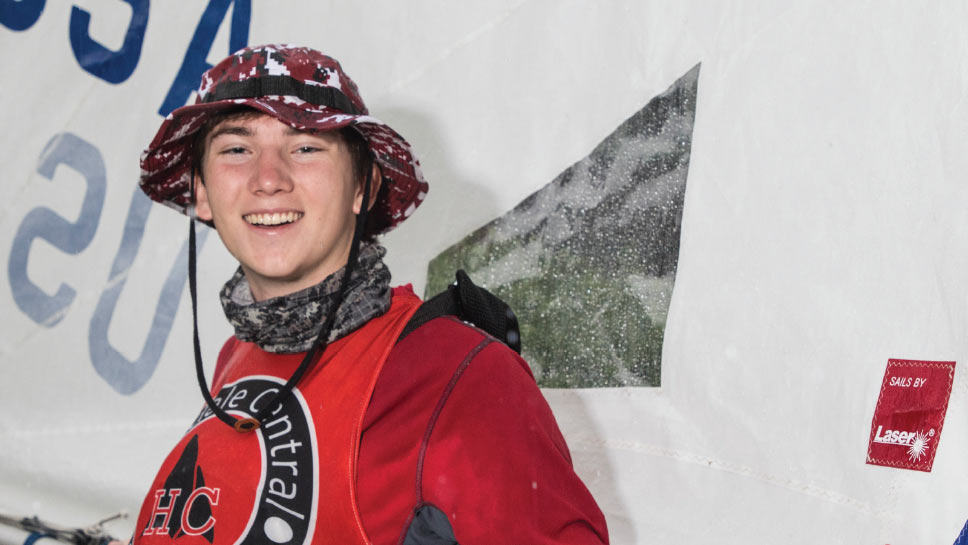 A Hinsdale Central High School graduate prepares to study physics at University of Michigan, with a little help from his passions for jazz and sailing. PHOTOGRAPHY BY JOEL LERNER

Sherman, who will pursue a degree in physics while continuing jazz and other interests, is the oldest of four children and is already expanding family traditions.

His mother, Kara, grew up in Troy, Mich. The Thompsons annually visit Torch Lake in northern Michigan and are members of a yacht club, but have never participated in sailing. Thompson’s father, Eley, plays guitar and enjoys reminiscing about his high school band, and his grandfather played clarinet professionally in a New York City trio. Thompson proudly carries his grandfather’s business card in his wallet but is equally pleased to be to leading younger siblings to a new family sport. 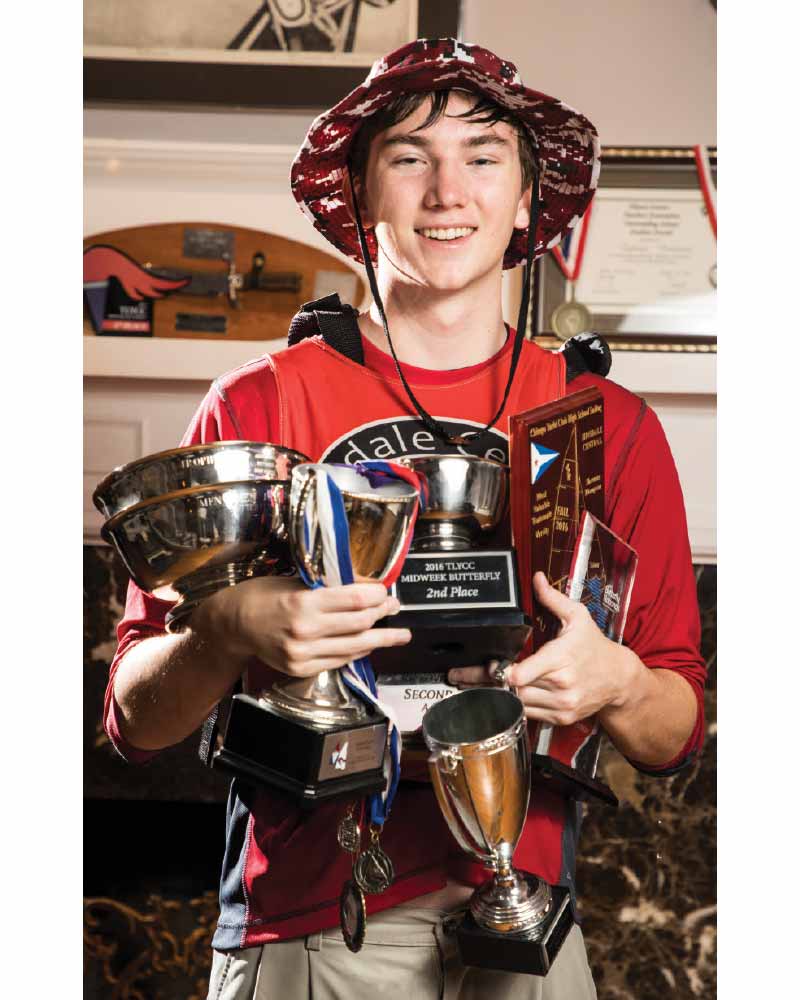 “I get to spearhead, trail-blaze, and make all of the mistakes,” Thompson says laughing. He learned sailing with a Butterfly dinghy, roughly 12-feet long, like others at his yacht club around age 10 or 11. “It’s a little community,” he adds. “You know people there for your entire life. You’ll have friends forever,”

In the fall of 2010, four students formed the Hinsdale Central sailing team, which competes varsity but is not school-sponsored. The Red Devils compete in fleet racing, in which two-person crews sail 420 boats (4.2 meters long) in A and B divisions against multiple opponents, and team racing, in which three two-person boats compete head-to-head against another team.

The Red Devils practice alongside opponents such as New Trier and St. Ignatius—and receive the same coaching.

“We all see steady improvement because we’re not sequestered in our own corner,” he says. “One of the best things is even if you lose, it’s the best competition. You’re still learning.”

In the five-state Midwest Interscholastic Sailing Association’s November 2017 combined rankings, the Red Devils were No. 12, fourth-best among Illinois high schools. In April, the Red Devils finished second at the District Qualifier team competition at Belmont Harbor. Over the past two seasons, Thompson has finished second in two A division fleet regattas.

“It’s not all boat shoes and Bermuda shorts,” Thompson says. “This type of sailing, it’s one of the most physically intense sports. The meets are really long. Depending on the wind, you can be hiking out for hours. When you get to the college level, some of the athletes are amazing.”

Through the team and CYC Neill Sailing Clinics, Thompson now has met many nationally-prominent competitors and coaches. At one Inter-Lake Yachting Association regatta last summer in Wisconsin, Thompson felt among them, at least momentarily.

“I saw this piece of breeze no one saw. I found the hole between the boats and I rounded the top mark in second—in front of Olympians and college sailors,” Thompson says. “It perfectly happened and I got really, really lucky, but I also saw the wind, which was really cool.”

Jazz always was the genre of choice when Thompson began learning piano in eighth grade. He joined the jazz band as a sophomore and the higher-level jazz ensemble as a junior, continuing a journey started by one of the greatest albums of all time—Miles Davis’ classic 1959 Kind of Blue.

“You can sort of tell if a player is classical by how they sit at the piano. Jazz players sort of plop down,” Thompson says. First watching classes on YouTube, Thompson’s interest in physics was by fueled by Hinsdale Central teacher Marv Breig. As a senior, Thompson finally “had enough time” to be on the physics-based JETS (Junior Engineering Technical Society) team coached by Breig.

“Physics combines problem solving, the solutions that are an interesting thought process, with some of the coolest tools in terms of mathematics,” Thompson explains.

“He told me that physics makes his sailing better and sailing makes his physics better,” Breig says. “Sherman is one of those students who asks questions that other students don’t think to ask.”

With a major in physics, Thompson feels he will have numerous graduate options, such as practicing law like his father. Thompson’s mother, aunt, and uncle are among numerous Michigan graduates he knows personally.

“Choosing Michigan was a combination of fate and just realizing they have a really great combination of what I want to do,” he adds. “The cool thing about physics majors is they statistically score high on graduate exams. If anything, I’m over-preparing for what I’ll do.”