A couple Sundays back, we did the unthinkable. We defied—nay it should be said violated—one of the last inviolable rules of restaurant dining: We went to a steakhouse and didn’t order a steak.

No meaty bone-in porterhouses. No toothpick-tender filets. No gloriously marbled rib-eyes. We avoided them all—unless you’re one of those creaky-kneed gourmands who cling to the heresy that six-ounces of chateaubriand is technically a steak.

And you know what? It was glorious, in large part because we picked the right place to commit our sins: Perry’s Steakhouse and Grill in Oak Brook.

Unorthodox? Heretical? Foolhardy? Perhaps but surely at some point in your dining life, you’ve harbored similarly transgressive thoughts, which tend to rise up from that same primordial lobe of our brains that keep trying to pair wine with artichokes and asparagus. 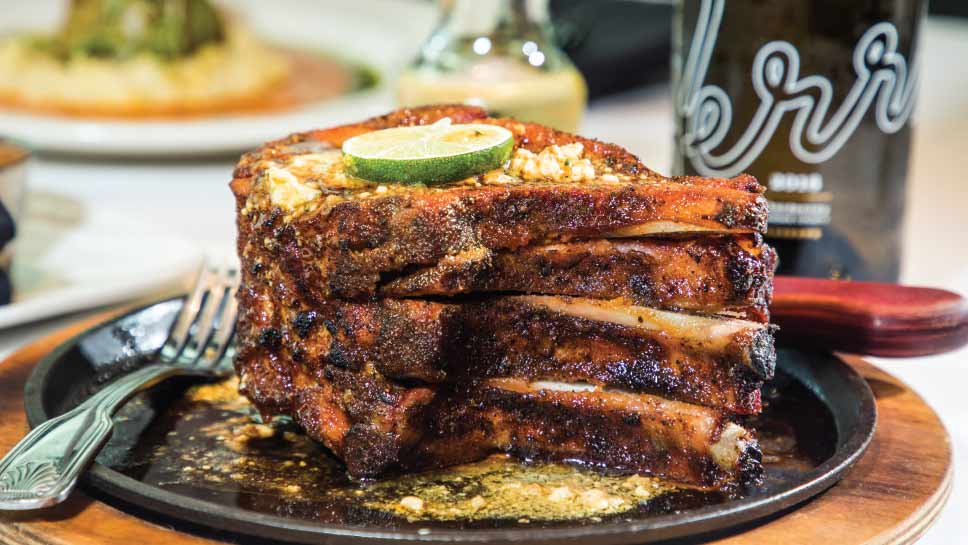 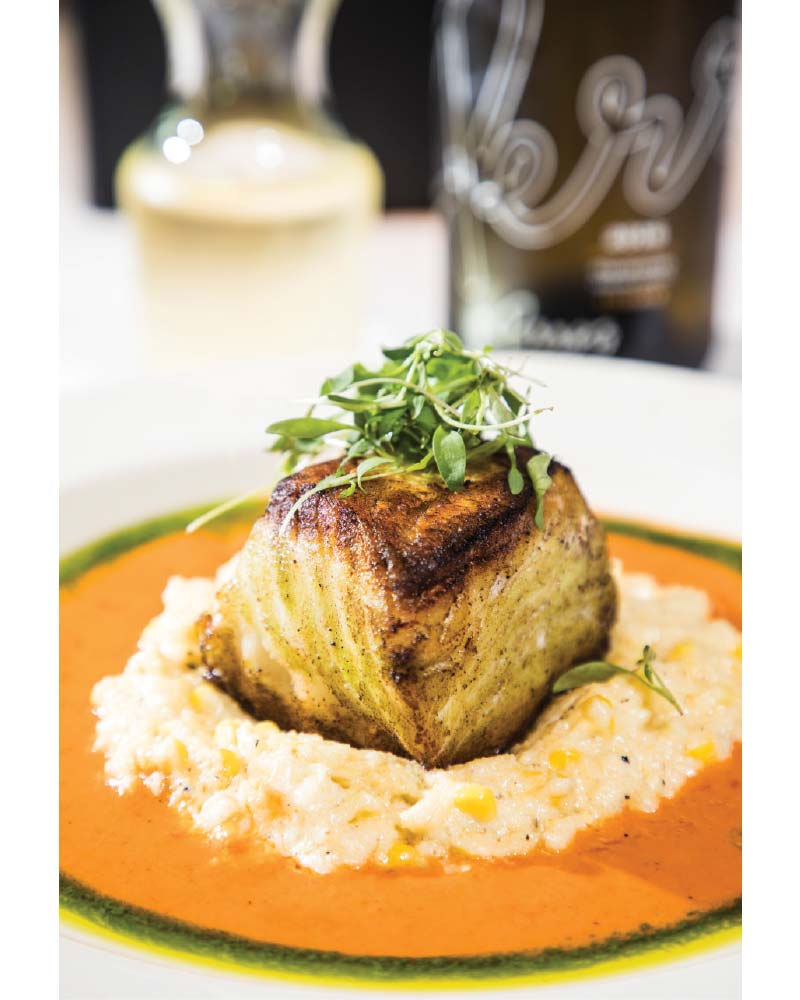 The history of Perry’s helped nudge us toward our infidelity. It’s a Texas-based chain whose origins harken back a simple butcher shop in Houston that was run by a local meat monger named Bob Perry.

In 1979, Bob’s son, Chris, encouraged his father to add some tables and create a restaurant. In time, it became a steakhouse empire, eventually setting down roots across the country, including in Oak Brook, which marks the only Perry’s in the state.

Thus, Perry’s is a Texas-style steakhouse, whose massive kitchen is built around a giant smoker that’s rarely seen in these parts. You can tell it’s a Lone Star kind of place because a giant wall-mounted steer, which stands guard over a butcher’s case to greet diners when they walk in the door.

Fortunately, the rest of the dining room is downright debonair. The room is all curves, including circular light fixtures, walls stocked to the rafters with rounded bottles of fine wine and a layout that seems to undulate like an old 1940s nightclub.

With respect to service, Perry’s is a welcome throwback to those high-touch times, as servers wheel tableside carts through the white-tablecloth dining room, prepping all sorts of dishes within arm’s reach of its customers.

Some of Perry’s best appetizers have a similar mid-century modern lilt to them: think old-school favorites with a modernist touch. Note the classic “black-and-blue” crostini app: rare slices of beef get topped with crumbles of surprisingly mild blue cheese, which are then nestled on a sweet schmear of bacon jam.

The only thing that shines brighter on the app list is the house’s tempura-battered lobster tail, which arrives looking like glistening hushpuppies poking out of from the hull of a curled lobster tail. Fortunately, the crispy fried hulls never overpower the sweetness of the lobster, which taste as creamy and buttery as a good seafood croquette. 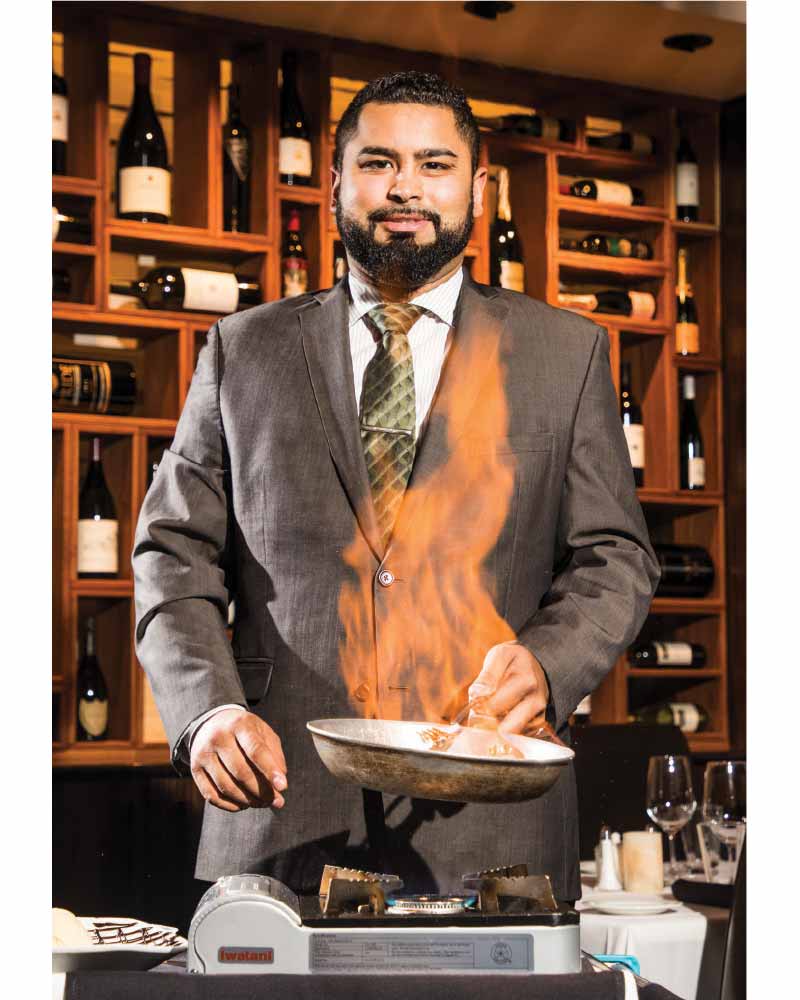 But let’s be honest: The apps are a mere prelude to the main attraction, which is Perry’s signature smoked bone-in pork chop—an entree so massive it gets carved tableside into three separate portions. No one will comment on the rub, but suffice to say the Texas-style coating is redolent with brown sugar, pepper and garlic and as thick as a paste-like agrodolce. You’re encouraged to pick up the rib portion with your hands and to dip the loin portion in the house’s magnificent applesauce, which captures the clove-meets-cinnamon richness of your granny’s best apple pie.

But the real treat is what Perry’s calls the eyelash of the chop, that juicy cap of pure pork flavor that lays over the loin. If you’re like us you’ll fight over every morsel, which glistens with juices and concentrates the potency of the rub.

The house chateaubriand—a 1970s beef tenderloin classic—also hit the mark.Seafood lovers should consider the sea bass, which is moated by three different sides—a summery creamed corn, a romesco-esque red pepper coulis, and a thinner cilantro oil, all of which combine to create what should be called a Texas-style primavera.

Whatever your inclination, including if you go with a conventional wet-aged steak, make sure to order Perry’s best side—fried asparagus, coated in crispy Italian breadcrumbs, that are topped with lumps of ultra-sweet crab meat tossed in Perry’s signature garlic-herbed compound butter. It’s a vegetable Milanese meets a crab boil, crispy, sweet, and dazzlingly good.

To finish, make sure your server wheels his tableside cart your way one more time, so that he can whip up Perry’s signature nutty D’Angelo which flambés tiny morsels of pecans and brown sugar with a fireball of brandy and pours the mix over a snowball of vanilla ice cream. The result is like consuming a praline pie in ice cream form, which will no doubt throw your diet plans out of whack for the evening (or week). But after racking a lifetime’s worth of steakhouse sins in a single evening, we weren’t worried. Repentance, after all, was made for the morning light.