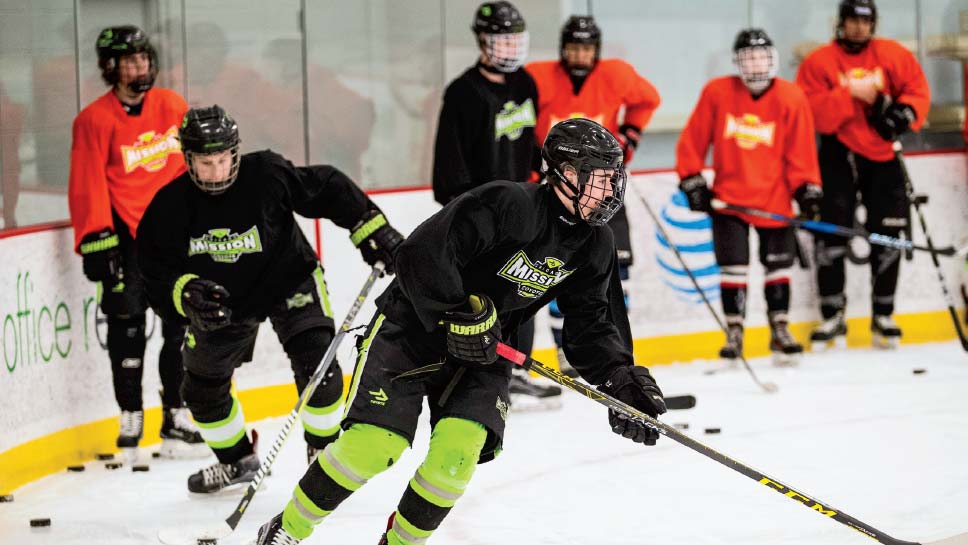 Former Chicago Blackhawks captain Adrian Aucoin of Hinsdale watched his son Kyle grow up on the ice over at the United Center. Now, at age 15, the Hinsdale Central High School sophomore has been drafted to play with the Sudbury Wolves in Canada. PHOTOGRAPHY BY JOEL LERNER

Every father has that one crystal clear memory of their child that stands out above the rest, and is the one they tell again and again. For retired Chicago Blackhawks defenseman and coach Adrian Aucoin, the scene that stays fresh in his mind was watching his three-year son, Kyle, play on the ice at the United Center—oblivious to the reality that “Daddy’s job” wasn’t like all the others.

Kyle was the oldest and at the time, the one and only son for the Ottawa-born hockey player.

“I remember getting there early, to rehab one of my injuries, and watching Kyle trot across the rink with a chair he used as a training device,” says the 44-year-old Aucoin, now the father of five (Christina, Alyssa, Kyle, Cameron, and Kaden).

Kyle Aucoin wouldn’t need that chair for long. Fast forward a decade later and youth hockey fans were catapulting out of their seats to cheer for his game feats in skates. The Hinsdale Central High School sophomore, a 5-foot-10, 145-pound defenseman, became a two-time USA Hockey Tier 1 national champion earlier this year with his U16 Chicago Mission team. 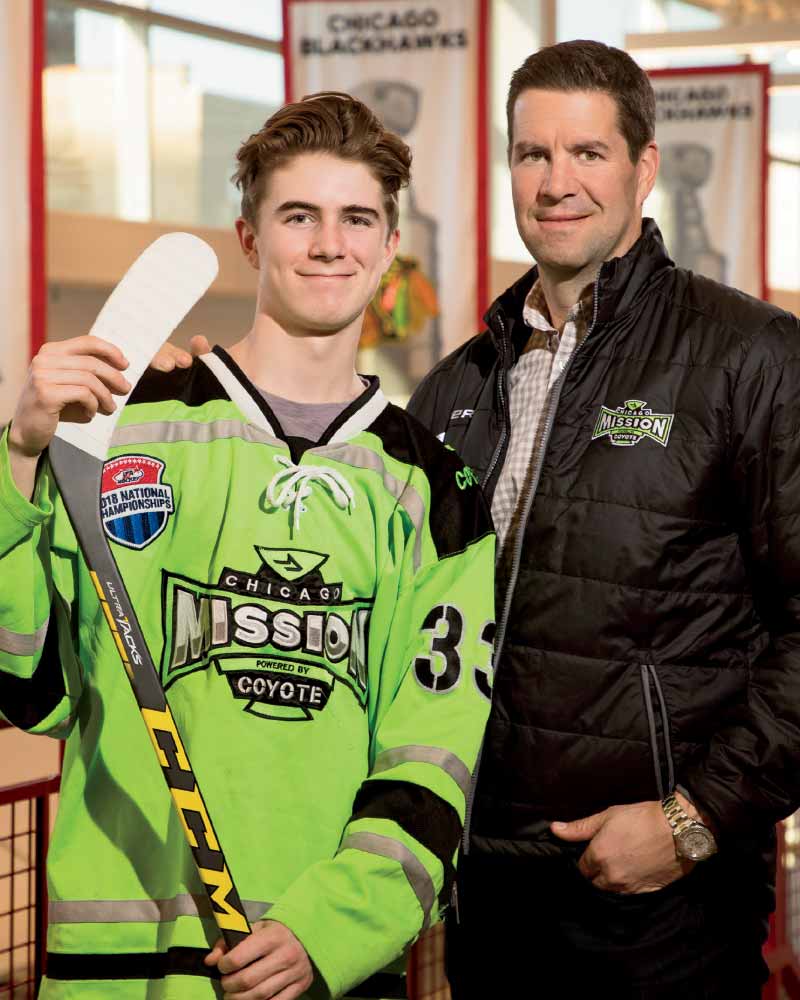 And then came the news that would make any father proud, especially someone like Adrian Aucoin, a life-long hockey player who grew up in Gloucester, Ontario. Just a few weeks ago, in early April, the Sudbury Wolves—a professional team in the Ontario Hockey League—selected Aucoin in the seventh round of the OHL Draft with the 121st overall pick. Kyle Aucoin is 15 years old. Fifteen. 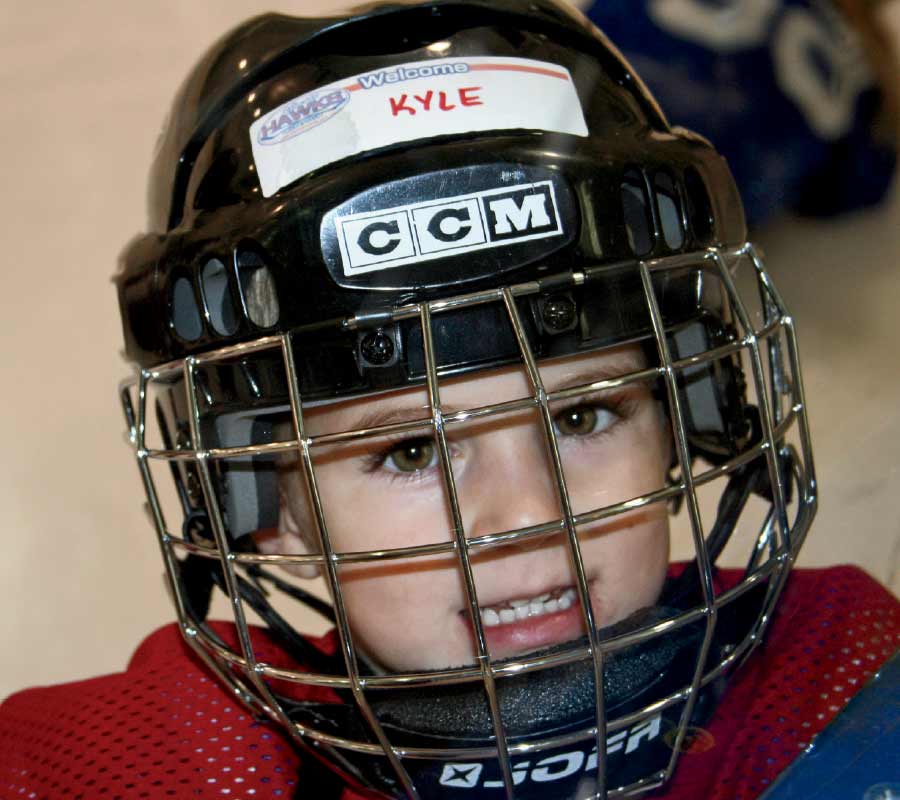 With a Blackhawks defenseman as a dad, Kyle Aucoin grew up on the ice.

“I found out I had been drafted in between national tournament games in Philadelphia,” says Kyle, adding his father was serving as a U16 Chicago Mission assistant coach. “Saw my name on a draft feed on my phone. Then I shot my dad a text message to let him know.”

Another professional team, Tri-City Storm, selected Kyle in the third round (35th overall pick) of the United States Hockey League Draft early last month. But Division I college hockey programs also covet Aucoin—and not just because he owns a superb skill set and he’s a son of a man who played professionally in the National Hockey League for seven teams from 1994-2013. The son also has a magnificent work ethic on and off the ice and a grade point average of 5.2 on a 5.0 scale. 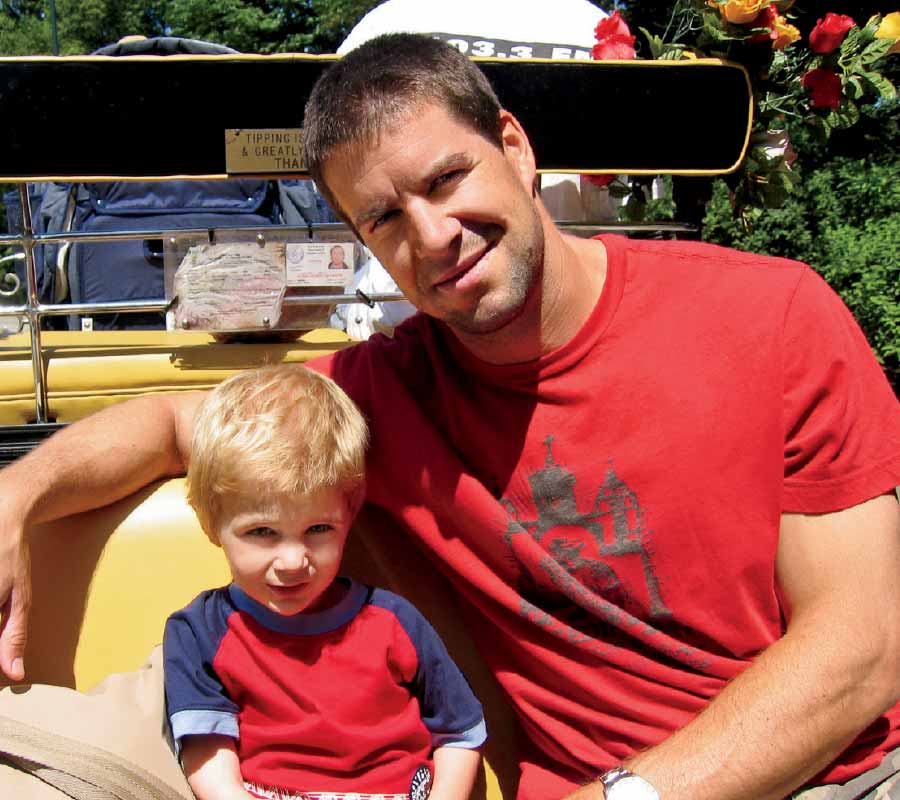 Were Aucoin to play one shift with the Sudbury Wolves, he’d lose his eligibility to play hockey in college. Rookies in the USHL, however, are allowed to hit the books in college libraries and “poke check” in college hockey arenas.

“He’ll have numerous opportunities to play hockey at a higher level,” U16 Chicago Mission head coach Anders Sorensen says of Aucoin, a lefthander who, with four minutes left in the third period of a 2018 national tournament game, joined the attack on a rush and scored the game-winning goal with a backhanded shot. “Kyle is an extremely good skater, mobile and powerful, and he’s improved his decision-making with the puck and added dimensions to his offensive game.”

The bane of wings and centers attempting to move the puck anywhere near Aucoin is Aucoin’s stick. His high, Mensa-esque hockey IQ often becomes his goaltender’s best friend against teams with potent first-liners.

“I like to use my hockey stick as a giant tool to knock the puck off others’ sticks,” Aucoin says. “I have to know where everybody is on the ice at all times; my job is easier with that knowledge. You have to use your brains on defense—I like that about my position, too. I’ve been a defenseman all my life, because I’ve always wanted to take after my dad. My dad used his stick well, had good vision, always knew what to do with the puck before it even got to him.” 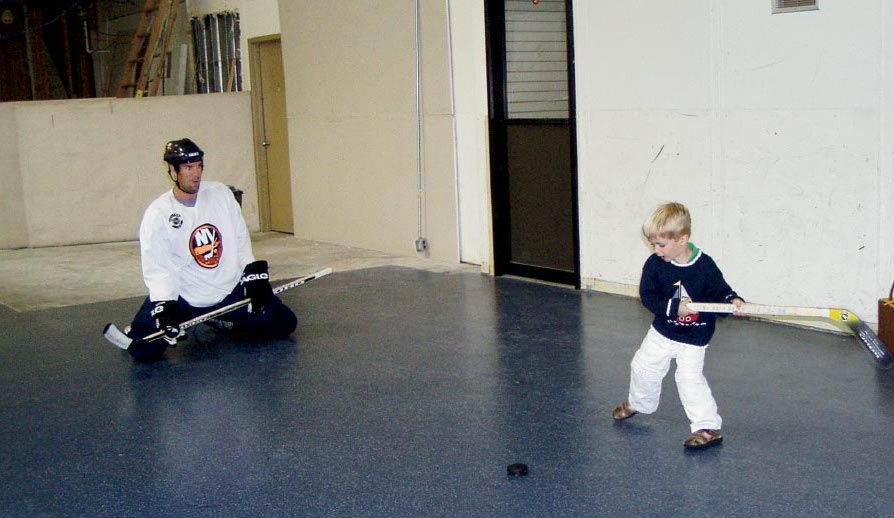 Drafted 117th overall by the Vancouver Canucks in 1992 and a 6-foot-2 defenseman on Canada’s silver-medal-winning team at the 1994 Olympic Games in Lillehammer, Norway, Adrian Aucoin represented the Eastern Conference as a member of the New York Islanders at the 2004 NHL All-Star Game and finished the 2003-04 season with 44 points, including a career-high 31 assists. He wore a Blackhawks sweater with a captain’s “C” on it from 2005-07 and played the final 36 games of his 1,108-game career with the Columbus Blue Jackets in the 2012-13 season.

“My biggest role model has been my dad,” Kyle says. “He had a successful hockey career, and he’s really smart. He’s helped me, motivated me. The best hockey advice he ever gave me was, ‘Stay positive.’ I try my best to do that each time I hit the ice. I’ve learned, from my dad, that your focus in hockey should always be on the next shift. It’s also important to never be comfortable with how you’re playing; you should always be willing to do what’s necessary to get better.” 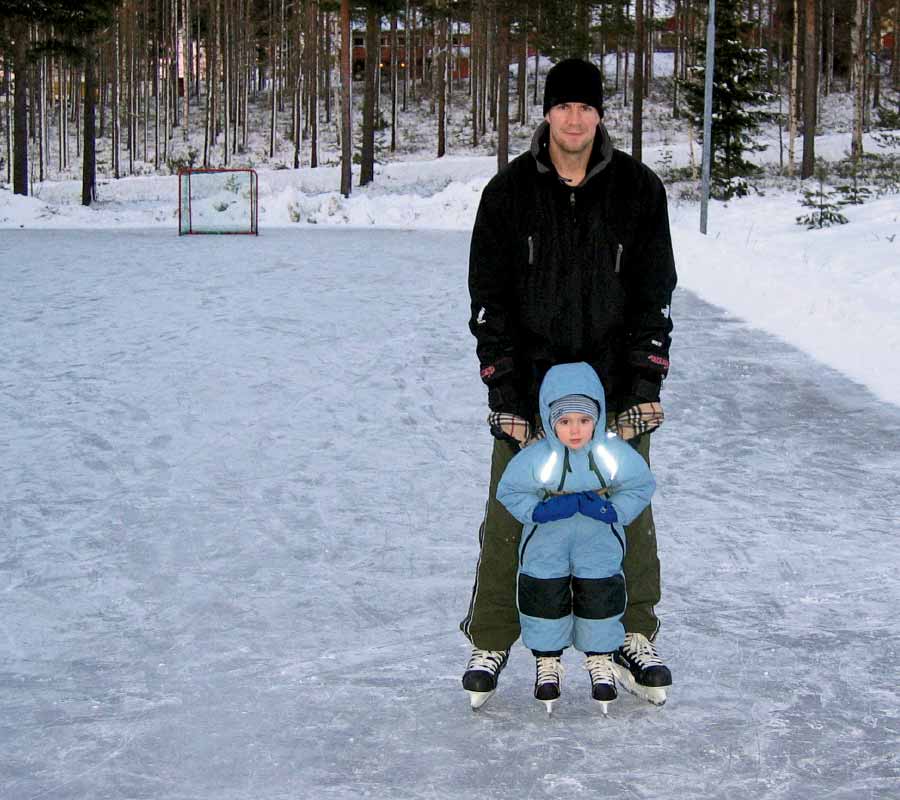 The life of an elite youth hockey player isn’t an easy one.

The travel demands typically mirror those of a national salesman in a company with a shorthanded staff. Winning preliminary and bracket-play games en route to that USA Hockey U16 national championship meant Kyle and his U16 Chicago Mission mates had to miss five days of school in the spring. But he has embraced every aspect of the sport since an adult—we’re guessing Adrian or Adrian’s wife, Caroline—helped Kyle lace a pair of skates up for the first time.

“I love the environment of the sport, everything about it,” says Kyle, who considers fishing and golf with his father priceless outings. “Spending time at a rink, being around such good teammates, the travel, competing every day … everything. The number of learning experiences I’ve had because of hockey is a high one. I’ll always appreciate the experiences. I want to take hockey as far as I can.”

Par for the course in Kyle’s hockey games, Adrian has noticed, is the collective reaction of the team’s bench players following a caused turnover by Kyle or a slick pass from Kyle or a courageous, painful block off Kyle’s body.

“Kyle’s teammates are genuinely happy for him whenever he makes a big play,” Adrian says. “A lot of that has to do with the way Kyle plays hockey; Kyle is a team guy. He’s not the biggest player on the ice, but’s he’s a really good skater, and his intelligence on the ice contributes to his team’s success. Hockey scouts have given me feedback about Kyle’s game, with many of them telling me, ‘Kyle is always in the right spot, plays mistake-free games, is accountable.’” 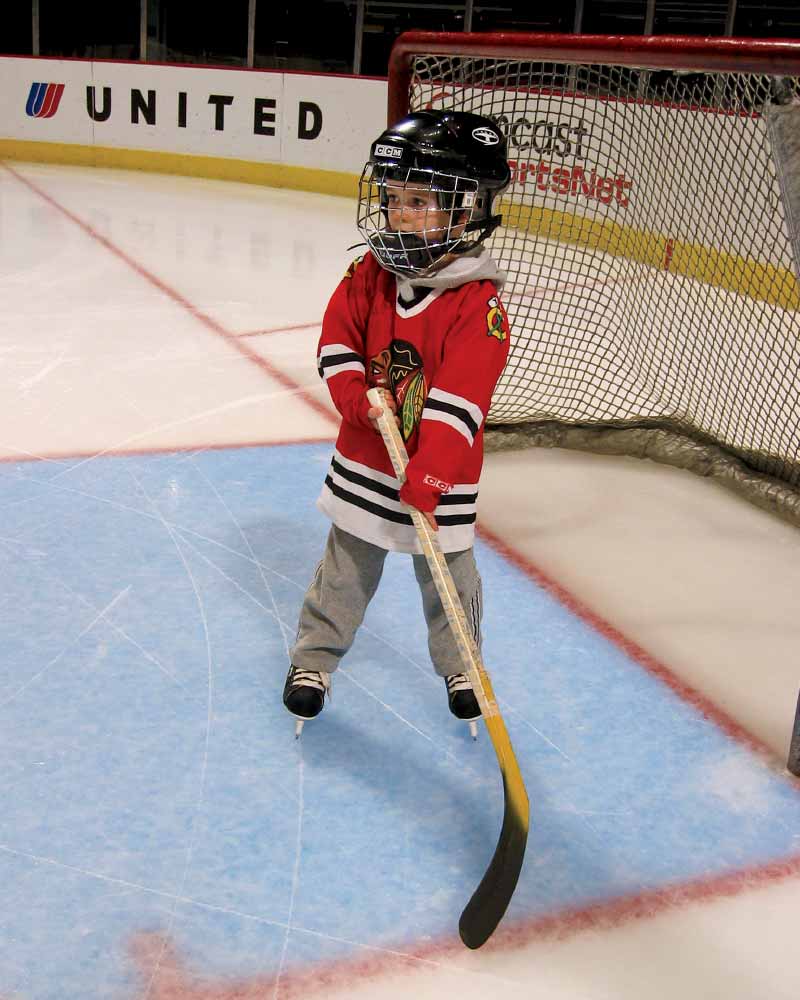 Near the end of Kyle’s lengthy road trips, the two most excited people in his life are Cameron and Kaden Aucoin. The younger brothers can’t wait to sprint and greet their big brother at the front door at home and insist he join them in some kind of competition—either in the basement or outside.

“Kyle never fails to give them the time they want, and he never complains about it, even though most of the time he’s probably exhausted,” Adrian Aucoin says. “Most kids would probably want to go right to bed or relax; not Kyle. I had a big brother while growing up, and I annoyed him to no end. I constantly asked him to play sports with me.

“Of all the things Kyle does, what makes me most proud is the way he treats his little brothers.”