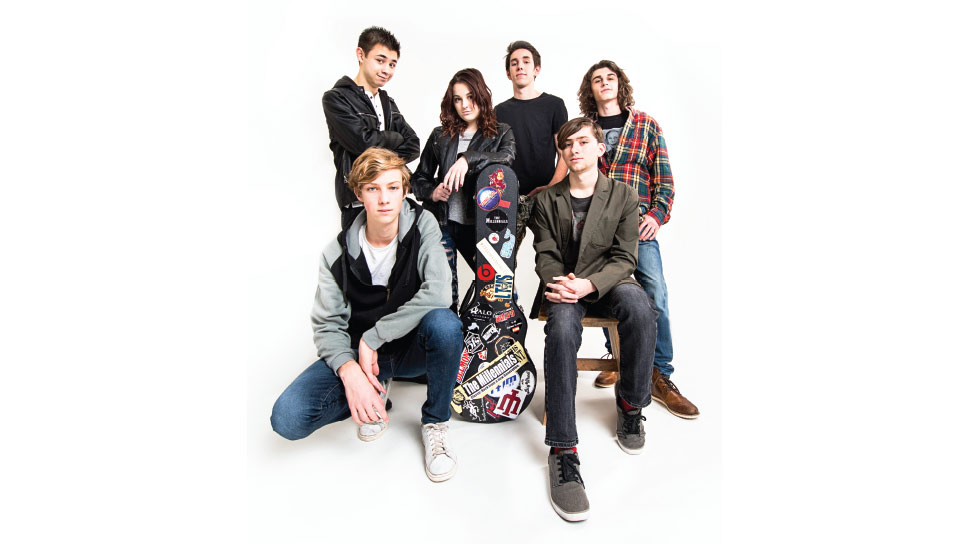 When Hinsdale-area teens, Jonathan Tatooles and Michael Henehan, met at The School of Rock four years ago, little did they know they would be lighting up the Chicago music scene as quickly as they are. They entered a “Battle of the Bands” contest with some other friends and took second place. From there, the group has evolved into a festival cover band, with some of its own original songs, forging their own way in the music world.

The Millennials consists of the following members: Michael Henehan on lead guitar and vocals; Jonathan Tatooles on drums; Lindsay Kent on vocals; Victor Buccellato on keyboard and vocals; Sam Peters on bass guitar and vocals; and RJ Guido on guitar and vocals. The band members sat down with Hinsdale Living prior to the “Switch on Summer” concert to discuss everything from writing original songs to a Google search that landed them their eponymous name.

Why the name The Millennials?

Henehan: We needed to submit a name for the Battle of the Bands so my dad and I found an article with some of the most searched words on Google in 2015. I thought The Millennials had a nice ring to it and was also symbolic as we are young kids continuing to keep rock alive.

Aside from singing covers, do you write your own music and where do you get inspiration?

Tatooles: Right now, The Millennials play mostly covers. I personally write music on the side with some other friends. I am the drummer so I create the rhythm and beats, and my friend writes the lyrics.

Kent: I have written some of my own music that I released, which The Millennials have played at shows in the past.

Can you tell us about the Buckingham Fountain contest? How do you feel about winning?

Tatooles: Awesome, super excited. It is part of ComEd’s “Switch on Summer,” where they turn on the fountain after a long winter. Fans voted on ComEd’s Facebook page and we got a lot of support from all over Chicago. We get to play with another great band called 16 candles. It’s going to be a blast.

Buccallato: I honestly can’t believe we found an opportunity like this. It’s crazy to think that a group of teenagers playing classic rock got enough people to “Like” them that they were able to play at a well-known location like Buckingham Fountain.
Peters: We are all so thankful for all the support that we received and I am personally super excited to play the “Switch on Summer” event.

How has your music evolved since you first started playing together?

Tatooles: Our skills and tightness as a band have gotten a lot better. We have had a few changes in the lineup of the band, but the current group has great communication and versatility.

Kent: Not only has our music gotten tighter, but also our stage presence together has grown so much. Last September, we had the opportunity to open for Lita Ford. During our set she was getting ready herself in her tour bus behind the stage. After we finished our set, Lita came out to meet us, and she couldn’t believe we were teenagers. She thought we had been playing together for years!

Where do you see yourselves in the future?

Tattooles: Right now I am looking forward to a great summer playing in over 30 shows with my friends. We hope it will continue, but we will see what happens.  I hope to study some aspect of the music business in college, and hopefully make it my career.

Hennehan: For now, we are happy playing local festivals and corporate events like the ComEd “Switch on Summer.” There is nothing more fun than playing music all summer with our friends. We all plan to go to college and come back for the summers and jam. Music will always be a part of my life.

Kent: In the future, I see myself playing music and performing for sure. Some of us are heading off to college in the fall but I think we would all like to be playing the festival circuit together for years to come.