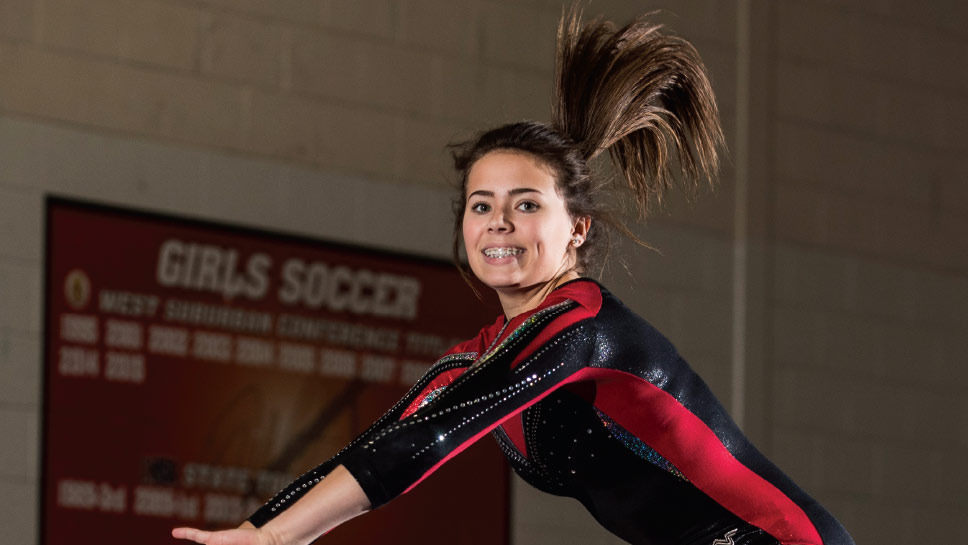 Take a deep breath, and have fun.

“What I’ve learned most from him and his work is not to take everything so seriously. He’s able to joke around,” Lily says. “There are so many sports he tries to be involved with. It’s a lot of time management and a lot more stressful than I would ever think high school sports would be. He has a lot of work to do, and he does it really well.”

Lily’s final season of competitive gymnastics has been joyous yet bittersweet. The all-arounder has seven senior and four four-year varsity teammates.

For Dan, this is his final dual season as athletic director and parent following older children Jake, Evan, and Sophie. His wife, Julie, assists other gymnastics parents at meets and even Dan in a pinch, such as a recent Costco run for concessions.

“The amount of preparation that goes into running events is incredible. I don’t think people realize the amount of time it takes during the day scheduling, not only on my part but the whole athletic staff,” Dan says. “I think my temperament and sense of humor helps. I’ve been doing this a long time so I’ve just got to keep things in perspective. The No. 1 thing is to try and do what’s best for our athletes.”

Even before becoming DeKalb’s athletic director, Dan taught there for 15 years. He was head football coach for three and an assistant wrestling and track coach. His first year at Hinsdale Central, Dan commuted between DeKalb and Hinsdale, staying with relatives in Downers Grove when needed.

“I had never heard of Hinsdale Central,” Lily says. When the family moved to Clarendon Hills in August 2013, Lily no longer could attend Energym in Sycamore. It’s where she began club competition in second grade and achieved Level 4 and 5 state all-around championships in 2010 and 2012.

The past two years, she’s been heavily involved with the Red Devil Nation spirit club. She has no shortage of spirit wear courtesy of Dan, whose license plate even includes RED DEVIL.

“His closet’s mostly all red. It’s really funny,” Lily says. “I think he loves watching gymnastics but sometimes other sports get in the way, and I understand he has to be there. He’ll come home from basketball or football, and when they win a really tough game, he’ll be really excited.” 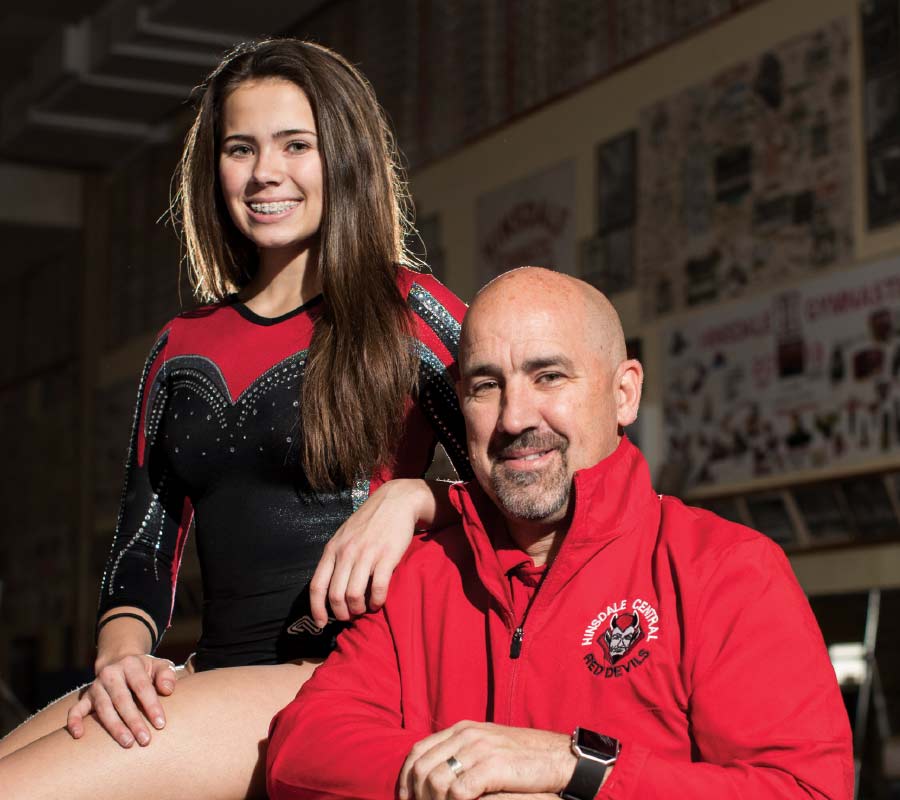 Lily with her father Dan Jones

“I remember talking about how impressive that record is and how it’ll never be broken. Then I find myself years later (at Hinsdale Central),” Dan said. “Again, I don’t think it’ll ever be broken, or it’s going to take a heck of a school year.”

After Lily sat out this season’s first two meets with a back injury, the seniors earned their highest team score (141.65), and the Red Devils finished second at their home invitational. Current teammates Jessica Elliott and junior, Kylie Torsberg, were among Lily’s first friends in eighth grade after moving. They met at the Balance Institute of Gymnastics club.

“I like the whole team aspect to high school gymnastics and how it’s an individual sport but still an all-around team,” Lily says. “When all the schools do their (pre-meet) cheers, the most important thing we say is have fun and support each other. The whole environment we’ve created is really positive. Even if we all fall, we just laugh and say we can always redeem ourselves at the next event or next meet.”

Lily is headed somewhere warm, probably the University of Mississippi or Arkansas, or Belmont University, to become an athletic trainer and physical therapist eventually.

“I know I want to be involved with athletics in some way,” Lily says.

“I was a lot more nervous back then. Being the parent, the coach, the administrator, I learned to only be one,” he explains. “I learned through trial and error to look at it as just a parent and hope that they compete the best they can and have fun doing it. That’s the thing I always try to tell our parents. Just try to be that parent, be that support, and try to enjoy it.”