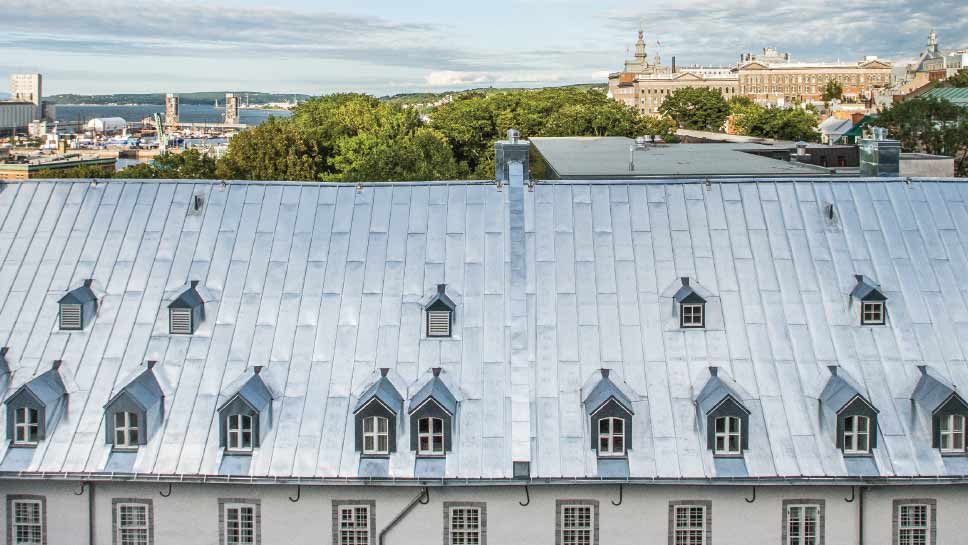 Check in to Québec City’s luxurious Auberge Saint-Antoine, the ultimate site to explore the 410-year history of the only walled city north of Mexico. Your French-infused winter adventure awaits.

The French call it je ne sais quois, that certain thing or experience that’s almost too special for words. And that’s the best way to describe how you might feel when you step into the breathtakingly beautiful Québec City—a UNESCO World Heritage Site (which means the entire city is protected globally by the United Nations Education, Scientific, and Cultural Organization … mais oui).

At times, it’s almost otherworldly—to be able to walk in the path of early French explorers who made the treacherous ocean journey to found the only walled city north of Mexico in 1608. From the stories of brave 17th century teen girls who joined the Monastère des Augustines sisterhood and helped build the first North American hospital to tales of Samuel de Champlain (who led by example with First Nations people) and fearful early settlers who fortified the capitol of New France to protect it from invasion, it’s no wonder many historians consider this old city to be the cradle of French civilization in North America. (And yes, French speakers still comprise more than 95 percent of its population.) 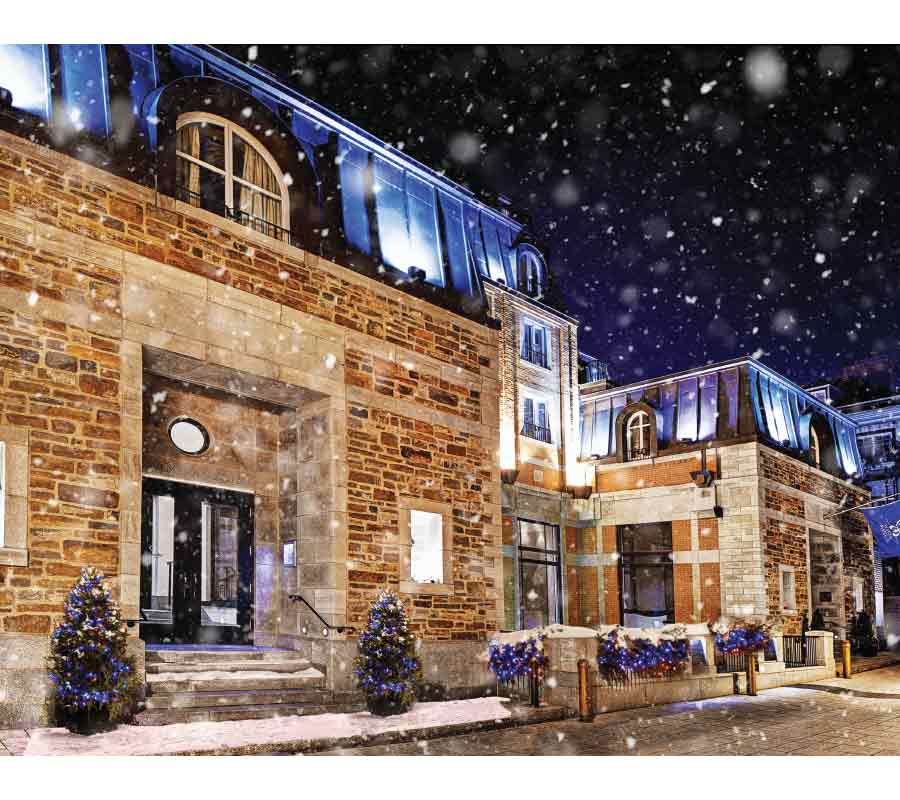 With that in mind, our First Class winter sojourn starts in a place that is at the crossroads of the past and present and future of Québec City. It’s a game-changing archaeological site, it’s a link to everything you will learn about the 410-year history of New France on every walking tour you’ll take in this postcard perfect landmark, and even better, it’s an award-winning Relais & Chateaux boutique hotel (yes, there’s even a spa). Located in the heart of Québec City’s Old Port, the luxurious Auberge Saint-Antoine (saint-antoine.com) has an antiquity all its own, one that ties together centuries of colonial maritime exploration and the founding of a new world.

So, before you even venture out to the picturesque cobblestone streets of Place Royale (one of the oldest neighborhoods in North America) or visit the Monastère itself (details on that to follow), relax for a moment in the hotel lobby and prepare to meet Bruno Page, one of Auberge Saint-Antoine’s resident history enthusiasts and your tour guide for the afternoon.

“We are a luxury boutique hotel but we are also a small museum,” says Monsieur Page. What you are about to learn will inform everything you do in this 17th century city after this tour has ended, whether it be shopping the boutiques of Quartier Petit Champlain or enjoying steak frites at one of the cafes (we loved Bistro Sous Le Fort, bistrosouslefort.com) by the Chateau. The true beauty of this oh-so-French city is how everything fits together like a lost treasure map—where the old meets the new, and the past meets the present. 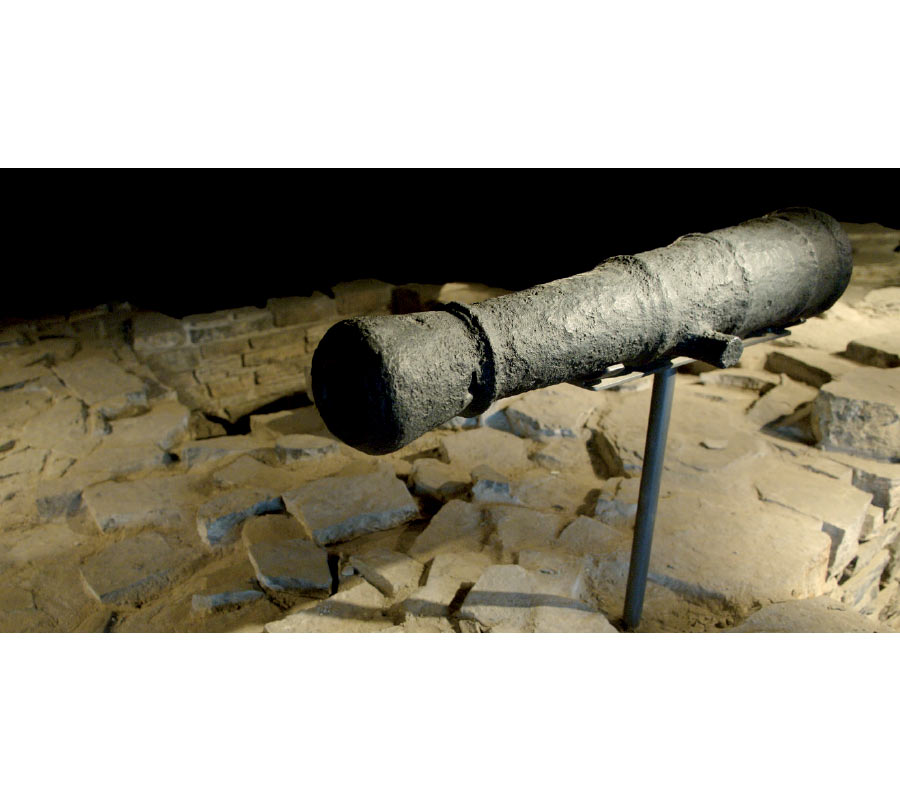 A cannon on display at Auberge Saint-Antoine

Situated just opposite the St. Lawrence River on what was known in 1687 as the Ilôt Hunt property, Page will explain that the site where the Auberge was built was once used as a wharf, then a cannon battery, and then as a British merchant warehouse. More than 5,000 artifacts excavated during the construction of the hotel are on display throughout the property. In fact, each of the hotel’s 95 individually designed rooms or suites has an artifact (and accompanying story) of its own.

Given this premium plot of riverfront property, owners could have done anything. But Tony Price and his family (which has a long family pedigree in Québec City dating back to the early 1800s) chose to work hand in hand with local officials to embark on a full scale archaeological expedition to protect and preserve what remains of a proud 300-year maritime legacy. 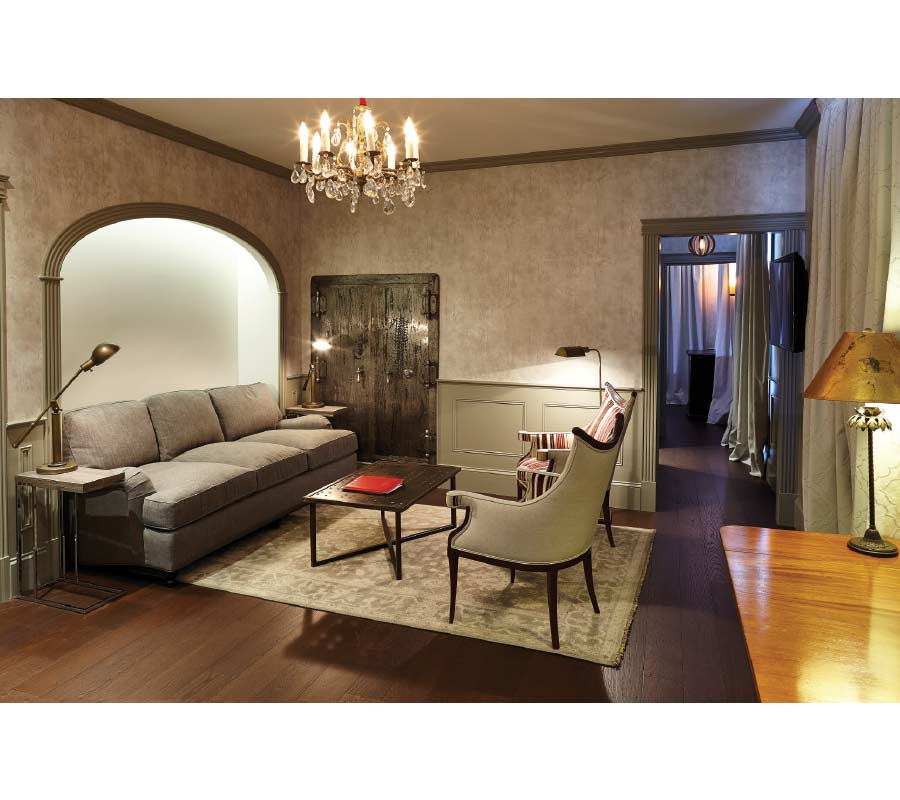 A luxury suite at the Auberge Saint-Antoine

For example, historical records show that two prosperous fur merchants who built wharves on the site in 1704 went on to build the Dauphine Battery to protect those assets in 1709. Once thought lost, that old cannon battery was uncovered during one of the digs and was ultimately incorporated into the hotel’s design. In fact, if you to look down at the floor of the Artéfact bar near the hotel lobby, you will be literally standing on top of it (and see the rest of what remains underground through museum-style glass windows). 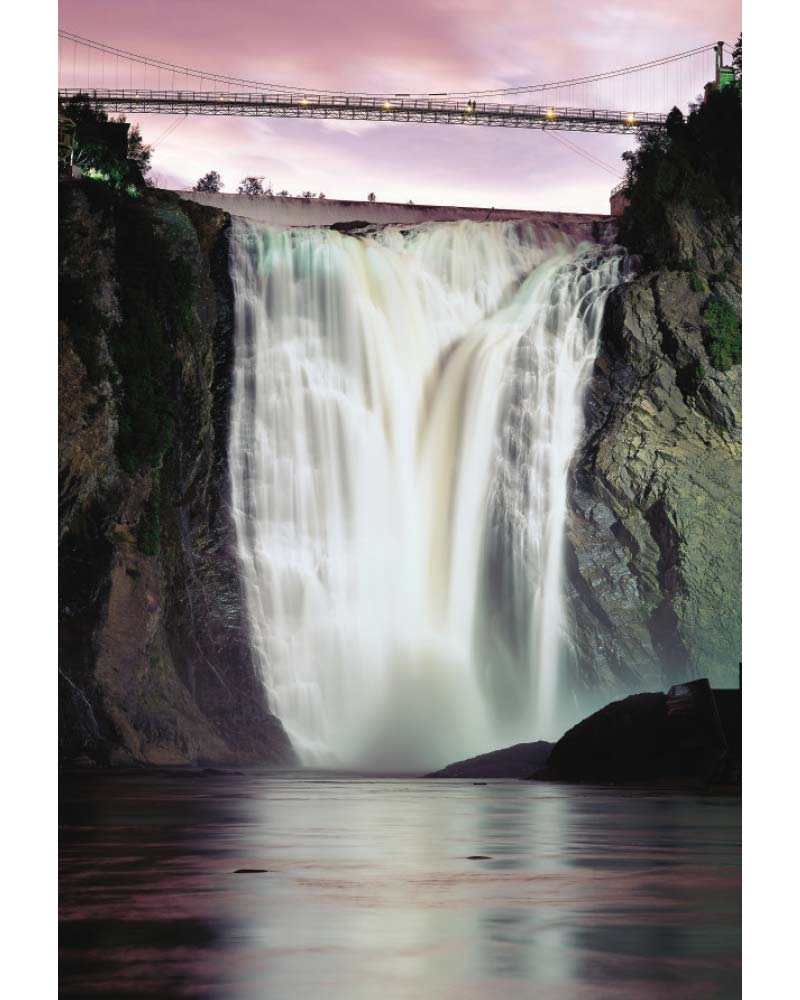 When the Auberge first opened on Rue Saint-Antoine in 1992, it was a small local inn with 23 rooms. As several different city-led archaeological digs of the site continued, the hotel continued to grow and evolve, adding seven historical suites inside the Hunt House and completing the final round of renovations by 2003. Today, the Price family—working along with Ville de Québec, Ministère de la Culture et des Communications du Québec, Conseil des monuments et sites du Québec, and Université Laval—is dedicated to preserving local history while offering a contemporary 21st century luxury hotel experience.

In addition to the Artéfact lounge, Auberge Saint-Antoine offers its Chez Muffy restaurant, built in the same maritime warehouse the British used centuries ago (and where many of the artifacts originated). Affectionately named after one of the owners, Martha Bate Price, the menu features dishes sourced locally in the community with an emphasis on reimagined classical French and Canadian cuisine (the foie gras is fantastic). When you book your suite, be sure to include a breakfast at Chez Muffy, which is a culinary treat and the perfect way to start your day of exploring the best of Québec City. 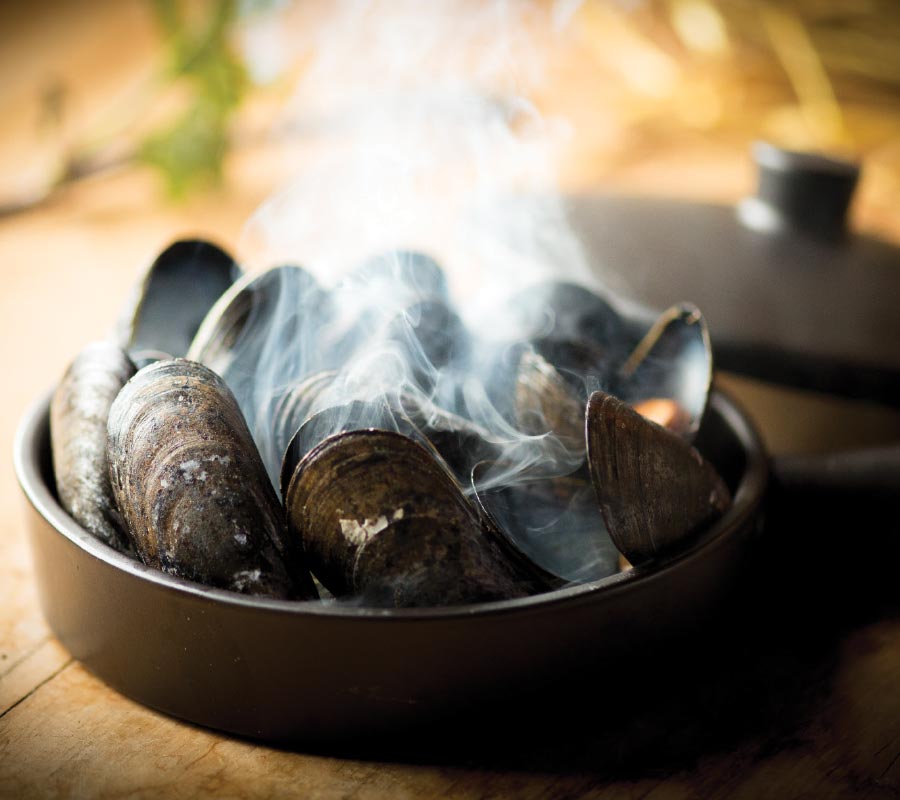 Now that you’ve had your VIP welcome tour and are settled into your sumptuous suite, it’s time to step and begin exploring this historic port neighborhood and the rest of the walled city. While no one humble travel missive can tell you everything, we selected a few of our favorites from a recent trip to get you started on the ultimate Québec City winter voyage (or spring break getaway).

The Monastère was founded in August 1639 when three sisters from the Augustinian Order arrived in Québec, ultimately creating the first hospital north of Mexico. And while the sisterhood disbanded in the 1960s, it was responsible for founding 12 hospitals and building what became the cornerstone of modern day health care in the region. A tour of the museum shows that the founding sisters were pioneering women of their time, many who left families in France as teenagers to sail across the ocean to help settle the new world. Today, the monastery operates as a hotel, health spa, organic restaurant, and nonprofit heritage and cultural center. For more information, visit monastere.ca.

Walk five minutes from the Auberge Saint-Antoine to the maison Louis-Jolliet (near Place Royale on the rue du Petit-Champlain) and you will be at the bottom of the Funiculaire du Vieux-Québec. For about three Canadian dollars, this funicular railway lifts pedestrians from the lower town to the upper town via a tram car that offers panoramic views of the St. Lawrence River and the city below. The ride itself is quick but well worth it to save steps walking the 45-degree incline up the hill where you can see the iconic Le Château Frontenac and the Musée du Fort military museum (museedufort.com). The original Funiculaire opened in 1879 and operated on a water and steam system. While there is a similar funicular system in the Monmarte region of Paris, there is said to be nothing else like it in North America. For more information, visit funiculaire-quebec.com.

Find Your Way to Montmorency Falls

Like any other travel destination, there is no way you can see every museum or tourist site in Québec City. And as much as we loved the Musée de la civilisation (mcq.org), Musée des Ursulines (museedesursulines.com), and the stunning new Musée national beaux-arts due Quebec museum complex in the heart of the arts district (mnbaq.com), a visit to the Parc de la Chute-Montmorency is well worth the trip. Our tour guide kindly took us on the short drive out to this natural historic wonder. Cable cars, suspended bridges, and even a zip line offer spectacular views of a waterfall that’s 98.5 feet higher than the famous Niagara Falls. For more information, visit parcdelachutemontmorency.com.