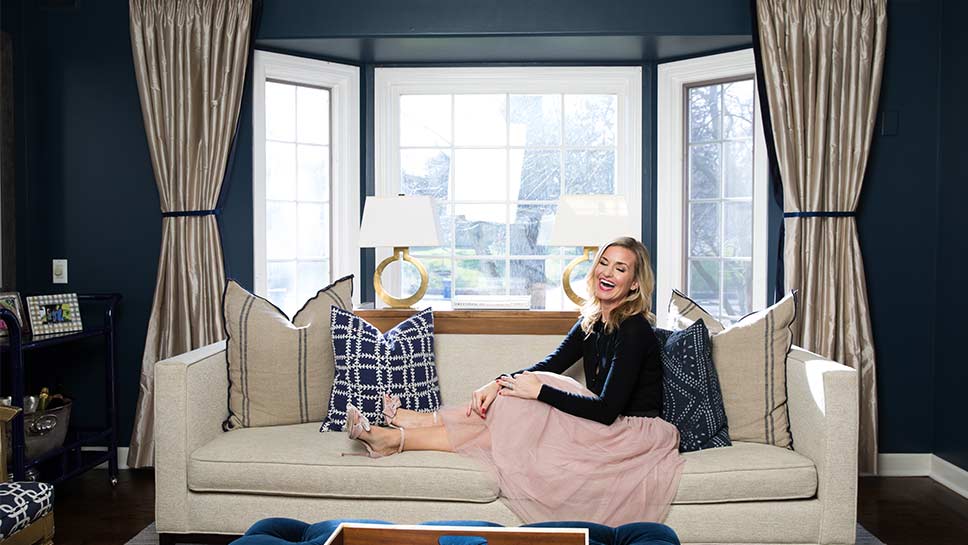 Katie Kozlowski of Clarendon Hills has been planning parties her whole life. Today, this busy mother of three has turned that talent into a career that will spill out to national television this spring as she appears in the Cake Hunters show on the Cooking Channel. PHOTOGRAPHY BY ROBIN SUBAR

As a little girl, Katie Kozlowski would start planning her August birthday party as early as February, with lists and ideas for how she was going to both celebrate her big day and show her friends a fun time.

“I once had a Babysitters Club party, where in the invitation I assigned a character in the book for the party guest to come as,” explains Kozlowski, who now has three children of her own and plans family parties with her husband Eric in Clarendon Hills. “The kicker was, I found actual neighborhood kids for us to really have to “babysit.” I should probably send out another late round of thank you notes to those guests for coming!”

Her family could chime in with similar stories of impromptu fêtes she organized throughout the years—from the hour-by-hour “agenda” she created for her family’s Christmas Day celebration (when she was in grade school) to the elaborate potluck gatherings she would arrange for her friends as a teenager. 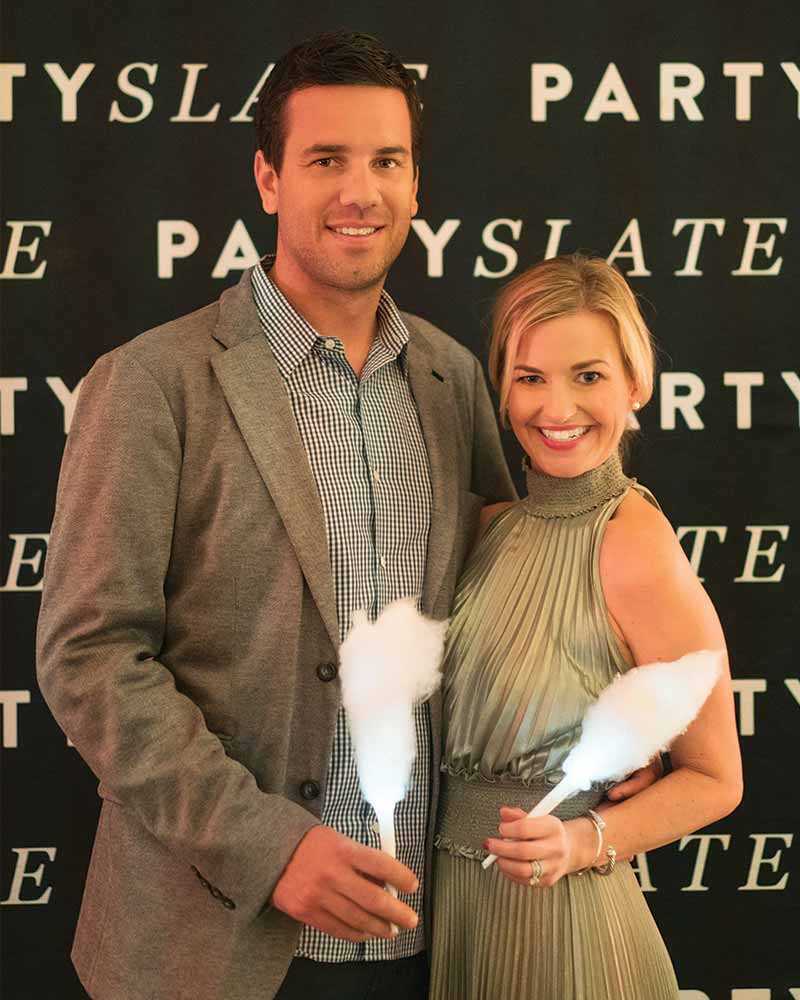 Katie Kozlowski with husband Eric at the PartySlate anniversary bash

“If I were an animal I’d be a herding dog,” she jokes. “I love a full house. I love feeding people and making their day brighter. And I love surprises. That’s what I love about parties and events; they bring people together.”

After channeling this energy into a job as an event planner for more than 14 years—which included everything from producing large-scale events for Jam Productions in Chicago to private weddings— Kozlowski heard about an innovative new company called PartySlate.

“I met Julie Novack, our CEO, while working with an event firm,” she says. “She was gearing up to launch PartySlate and I was intrigued by the platform, especially after learning how it connected top event professionals and party hosts around the globe through tech.” 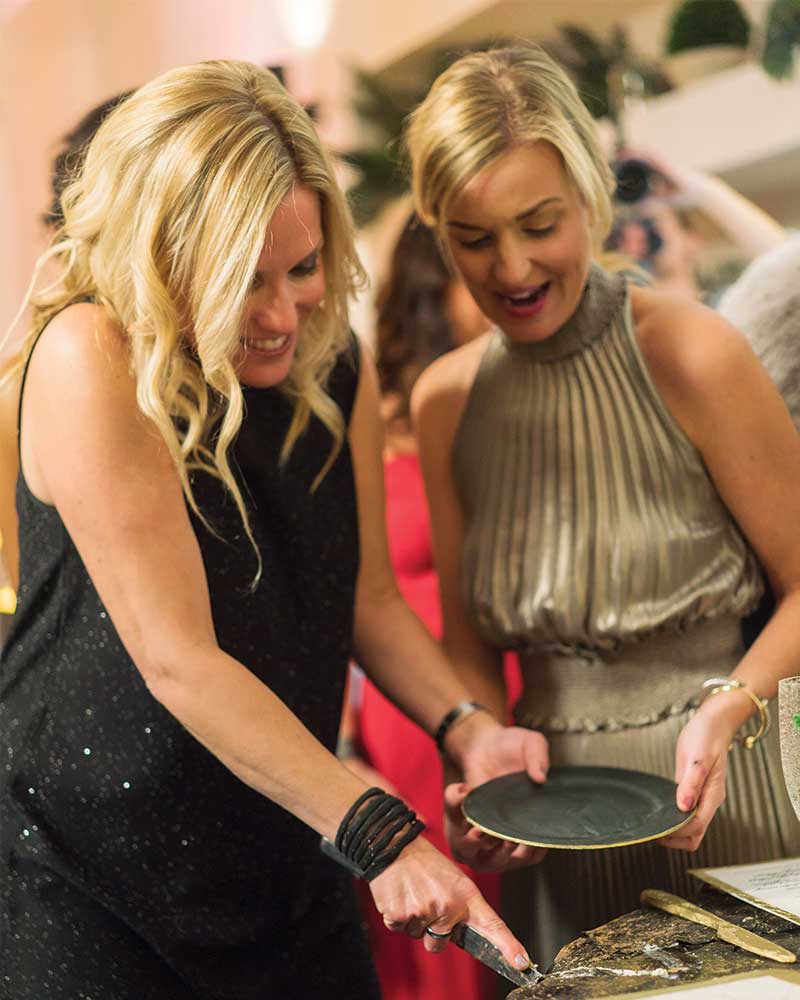 Indulging in the decadent cake

Today, Kozlowski has what is essentially her childhood dream job. As Director of Digital Marketing for PartySlate, she plans events and connects with like-minded party people around the country. “Hinsdale resident Andrea Antoniou is my sidekick at PartySlate,” Kozlowski explains. “It’s so much fun. Our daily conversations bounce from gorgeous events across the world to our favorite dinner spots in Hinsdale.”

But that dream gig got even sweeter last year when Novack and Kozlowski were selected to be on the Cooking Channel’s popular Cake Hunters series.

Much like the HGTV hit House Hunters, the Cake Hunters reality series is a competition between three local cake designers who present concepts for “the perfect cake.” The cake is typically for a major celebration and the episode follow the story from start to finish.

In the case of Kozlowski and Novack, the big event was the second anniversary of PartySlate.

“We are at a really exciting place in our business so we wanted to celebrate with an over-the-top party for our investors, premium members, and special guests” she explains. “And every spectacular party should have a specular dessert, so we needed an over-the-top cake.”

Kozlowski says her vision for the perfect cake was to create something that “had never been seen before” that was also “social media friendly.” Novack’s priority was to have a cake that was a true representation of the brand.

“We visited three bakeries—one of which was Toni’s in Hinsdale—where they each presented us with mini-versions of what they would do for our anniversary party,” she says. “Each baker interpreted our wish list differently, which was such fun to see, and then we selected a winner who made the large cake for our event.” 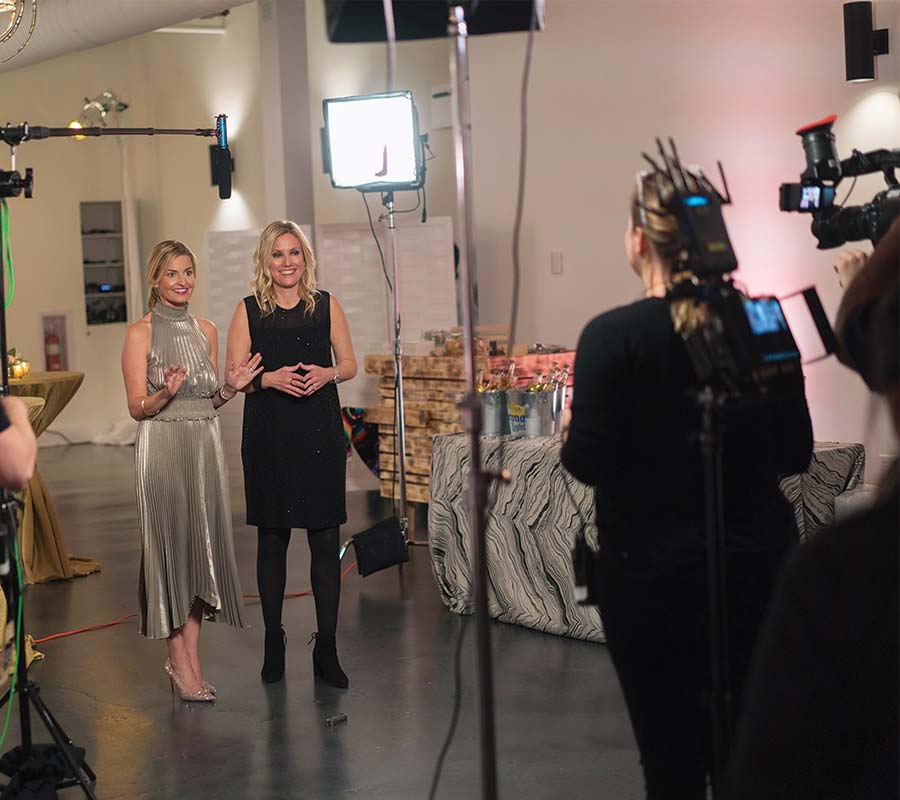 The “reveal” last year is part of the episode that will air this spring but Kozlowski hints that she was shocked that it fit both wish lists so perfectly.

In her personal life at home in Clarendon Hills, Kozlowski says she may not be what people expect from a professional party planner.

“While I wish that I could say that I am a super Pinterest mom, I am not. I have had more Pinterest fails that I can count. I do, however, love to hone in on something that they love or that is special about that year in their life,” she explains. “If nothing else, I like to make it a time capsule for us to remember a specific thing about their personality and interests that year.”

Daughter Anna, for example, is really into animals right now. So, for her recent 8th birthday, the party started with a tiny real-life animal educator (with pigs, puppies, and bunnies), followed by the kids playing yard games.

“For party favors, we had a stuffed animal puppy adoption center where the children picked their dogs, their gummy “bones,” and pink gable boxes made for the perfect puppy house,” Kozlowski adds. “I will say that my access to the newest vendors and party tricks makes for some really fun party additions. We brought in Dipsy Desserts in lieu of cake and it was such a fun way to end the party.”

Her son James will turn five this month and she plans to do the same thing with a theme, only this time focusing on his obsession with Legos.

“We’re dropping off a little Lego set as the invitation for his few guests for them to build and bring with to the party. They’ll then set up their own Legoland for the party,” she says, adding that similar parties were held for 3-year-old Nora. “I love taking simple joys and making them interactive.”

Kozlowski says she is grateful that she’s been able to turn this life-long passion for parties into a career. But it’s about more than having fun.

“I really do believe that inspired events inspire people,” she adds. “It’s funny, because events are not really a tangible thing but the way they make you feel are what make them so special.”