Hinsdale Central juniors Mac McClear and Josh Lundmark usually are seen together doing various activities. Most of the time that means golf—even when no one else is around.

“It’s usually in the fall when the weather is terrible and we’re the only people crazy enough to play,” McClear says. “This spring, no matter what the weather was, we played. One round, it was probably 40 degrees, 30-mile-an-hour winds and a downpour. We still went out.”

On October 14, they shared top-10, all-state finishes at the Class 3A state tournament that helped the Red Devils secure a sixth consecutive team championship. McClear tied for fifth (145 for 36 holes), four shots from first, and Lundmark tied for eighth (147). Their success is the product of strong friendship and a uniquely fierce competitive fire since meeting as first graders at Madison Elementary School. 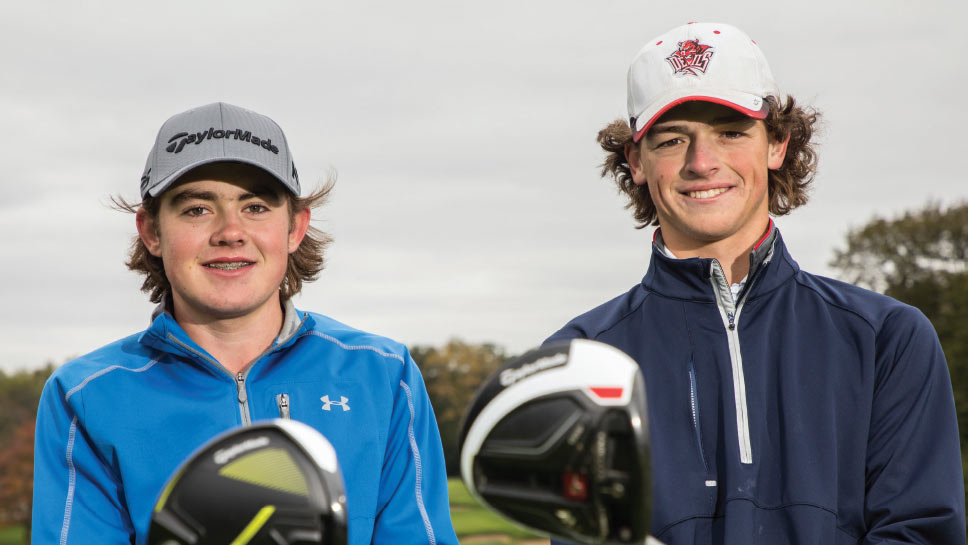 A pair of Hinsdale Central junior golfers enjoys some friendly competition, on and off the course. PHOTOGRAPHY BY JOEL LERNER

“I want to beat him more than I want to win state. I say that jokingly,” Lundmark says. “We’ve had a competition that I don’t get with anyone else. It’s good for us when we go in the state tournament. If I play well, then I’ll beat Mac and if he plays well, then he beats me. And it always bodes well for the team.”

Situated seven blocks apart in Hinsdale, they’re the oldest in their families. McClear has two sisters; Lundmark one. Both were introduced to golf at early ages by their father and quickly embraced the sport.

“He’s the brother I never had pretty much,” Lundmark says.

Their early days included 1-on-1 hockey games at McClear’s house. While never trying to hurt each other, McClear once struck his head on a table corner. 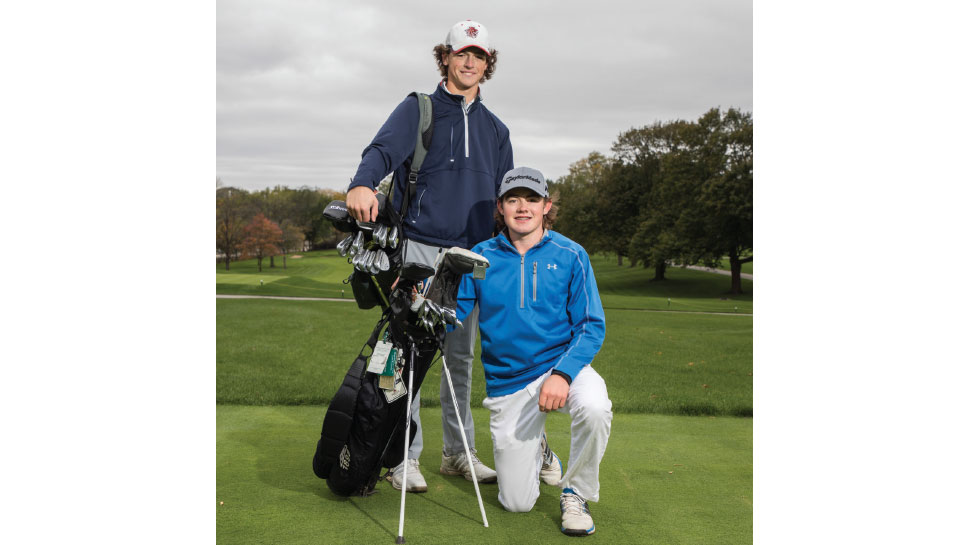 “It was bloodshed multiple times,” Lundmark says.
The families began splitting car pools to junior golf tournaments. The two have become avid skiers and travel together to Wisconsin. When McClear joined Lundmark’s family vacation to Colorado last winter, the boys went on their own.

“We’re still very competitive… really at anything,” McClear says. “If it weren’t for Josh, all those days with bad weather, when it was super hot, nobody else wants to play. It’s made me a more dedicated golfer. And he’s pushing me, working so hard to make sure he doesn’t beat me.”

This past off-season, probably the best golf news was McClear earning his driver’s license in January.

“A lot of times I wanted to practice and couldn’t get a ride,” McClear says. “It helped me get more consistent and know my game a little better. I’d go into the spring without having to take the rust off.”

Of course, Lundmark was usually by his side. They also conditioned together at Tier 1 Athletic Performance in Plainfield.

“He drove me to every single one of those sessions,” says Lundmark, who earned his license in May. “I owe him some gas money.”

The differences come in their golf games.

McClear hasn’t taken lessons. Lundmark has for as long as he can remember, giving credit to Oak Brook Golf Club pro Dan Kochevar for solidifying his swing and approach to the game.

“Lundmark has a more mechanically sound swing,” McClear says. “I compare him more to a robot. I pride myself as more of an artist.”

“Mac is an artist and I’m more of a scientist,” Lundmark says. “I try to think my way around the course and play strategy I’ve planned out. Mac is more take it as it comes. I would say his strength is probably putting. Mine is definitely wedges.”

By the high school season, they and junior Gabe Larson emerged as leaders. At state, McClear’s second-round, 1-under-par 71 completed his rise from sharing 40th as a sophomore.

“I think the pressure kind of got to me. This year, I handled it better,” McClear says.

In 2016, Lundmark tied for 11th, lamenting a 6-foot miss that would have tied him for ninth. This time, his first-round 69 shared the lead.

“It felt good to sleep on a lead,” Lundmark says. “My round is dictated by putting. I was proud of how I played the first day. The second day I didn’t play much different, just the putts didn’t go in.”

The two probably will be apart in their pursuits of college golf. McClear enjoys math and science and Lundmark his computer science classes.

“We’re for sure going to be life-long friends,” Lundmark says. “He’s been a staple in my life for so long, there’s no way.”

At 2018 state, they’ll try again to beat each other and everyone else. With five of their six state golfers now juniors or sophomores, the 2017 Red Devils established the longest streak of largest-class state titles and are one from tying the all-time longest streak.

“Next year we could get seven and hold the record,” McClear says. “That would be pretty special.”