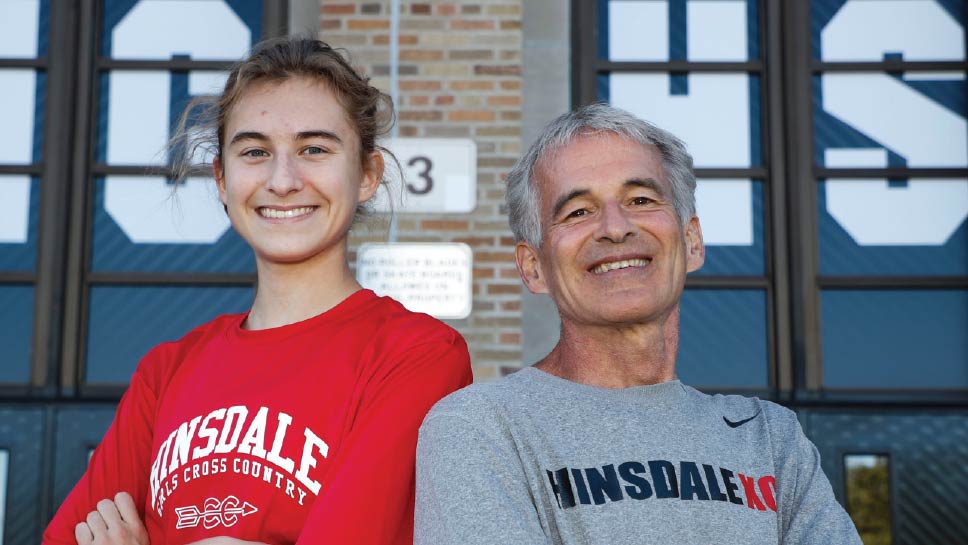 Grace McCabe of Hinsdale had two familiar faces on her cross-country journey. PHOTOGRAPHY BY JOEL LERNER

McCabe, Annie Zaher and Kayla Byrne tried to celebrate on the track with anchor Reilly Revord, but they weren’t allowed to leave the fenced area near the finish line.

“That was definitely a good feeling to win,” McCabe says. “I wanted to go out and hug Revord. It was so aggravating.”

As the four finally united, another surprising well-wisher joined them.

Mark McCabe, the Red Devils’ distance coach and Grace’s father, managed to reach the infield of Eastern Illinois University’s O’Brien Stadium, where coaches are not permitted.

“I don’t know how he finessed his way down there,” Grace McCabe says. “They kept telling him to get out of the pen and he was like, ‘One moment.’ That was funny.”

McCabe has shared many great running moments with her father, who also is the girls’ cross country head coach. She earned all-state cross country honors as a freshman and completed her latest track season at state with the Red Devils’ second-place 3,200 relay.

The 2016 3,200 relay achieved the first relay state title for Mark McCabe as a track coach.

“You’re so happy for them as an athlete when they’ve reached the pinnacle of what they’ve tried to achieve, and then for it to be your own daughter as well was very special,” Mark McCabe says.

“She’s a gamer, first and foremost. She brings it to the big meets when it matters most. She’s always been a better racer than workout runner. That’s what competitive sports is all about.”

Grace McCabe grew up around running. Her mother, Sarah, also was the girls cross country head coach and an assistant track coach at Oak Park and River Forest High School until the fall of 2010.

The McCabes intentionally kept Grace from structured sports, even running.

“I went to a lot of cross country meets when I was little. It was just a regular part of our lives,” Grace McCabe says. “They didn’t pressure me to do it. They were very good about that.” 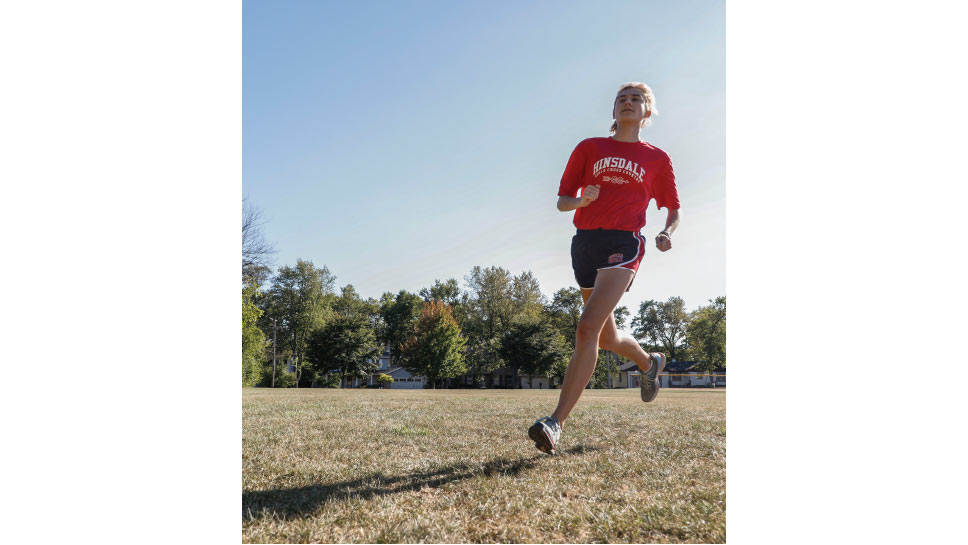 She stayed active in the yard with running games like tag. She played soccer and basketball but didn’t run competitively until Westview Hills Middle School.

“Now I just see her at night,” Grace McCabe says.

“Somebody asked me if I called him dad or coach at practice. I just call him dad. He’s no easier on me. If I would have to pick one, I’d say he’s harder, but not in a bad way. It’s especially good for remembering to turn in your uniform. I never forget that.”

One of Mark McCabe’s favorite mementos from Hinsdale Central’s 2006 Class AA girls cross country state championship is the spontaneous photo of him, Sarah, Grace, and younger daughter Catie with the trophy. Catie is a Westview Hills seventh grader with Sarah her cross-country coach.

“We don’t talk much about running, training at home. We try to leave that at practice,” Mark McCabe says. “I always joke with Grace if anything, I expect a little bit more out of her. It’ll look like I’m favoring her. I think I’ve learned to straddle that line.”

Probably the beneficiary of additional preventive and proactive measures, Grace McCabe never has had a serious injury. However, her competitiveness and resiliency have been tested. Finishing 20th at 2014 state cross country, Grace McCabe appeared poised for freshman all-state track success in the 3,200. The night before her race, she developed a terrible fever and cold. Grace McCabe still competed. After a 10:57.12 at sectionals, she was last among 31 finishers in 12:24.60.

“I was like, ‘Why is this happening?’” Grace McCabe says.

“My heart was breaking the whole race,” Mark McCabe says. “I shouldn’t have let her run. I give her all of the credit in the world for going out and making the effort.”

At 2015 state cross country, Grace McCabe was 28th, three places from all-state. After finishing 71st in 2016, McCabe had a disc injury in her back examined by a neighboring physical therapist. He discovered a bulls-eye like skin wound typical of Lyme disease that she probably contracted during the summer. But she recovered.

“It’s ironically good I pulled a disc in my back,” Grace McCabe says.

As she considers her next running chapter in college, how will she feel not having her parent as the coach?