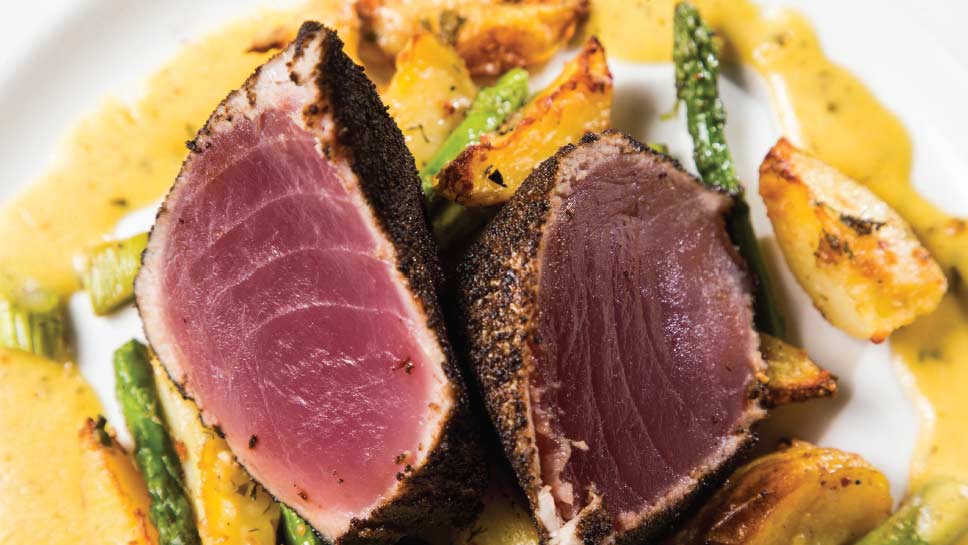 A unique approach to reinventing surf and turf makes Devon Seafood + Steak the place for a decadently delicious and decidedly classy night out.

Devon Seafood + Steak is all class. As we stepped through the door we were met with a sleek steakhouse vibe, the lights turned low with powerful spotlights trained on the center of every table creating a subtle glow throughout the room and a sense of privacy at every table. Horizontal blond wood paneling for the walls also adds an interesting source of lightness to the space as well as a coastal feel.

Shortly after we were seated, a big conversation starter landed at the table in the form of Cheddar and Peppercorn Buttermilk Biscuits with a scoop of butter covered in maple syrup and coarse salt. Staff circulate the room with baking sheets straight from the oven lined with these. The cheddar is apparent from the first bite, and the maple syrup lends a light sweetness before it resolves in a salt and peppercorn sting. The level of creativity and character expressed right from the table bread made us excited for how the menu would unfold.

Given the top billing that seafood receives in their name, it’ll come as little surprise that it was the dominant theme when we asked after some of the favorites of their regulars.

From the Openers section of the menu, the Jumbo Lump Crab Cakes are heavy on the crab meat, light on the filler. All of their seafood is top of the catch and the crab was deliciously fresh. They were accompanied by an apple cabbage slaw, that walked the same line as the cakes themselves, trusting in combination of fresh ingredients to create a bold impression. For dipping, there’s a mango tartar sauce, or a zesty creole remoulade. 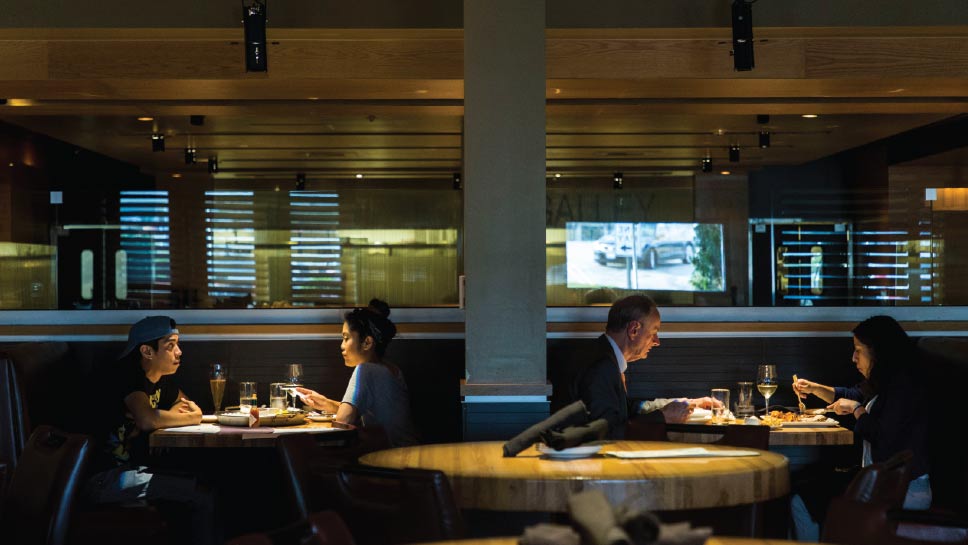 The Fried Calamari shows Devon’s deft touch with a fryer, keeping food crisp, decadent, and extremely tasty without any diner-food greasiness. The calamari, sliced, breaded, and fried, is wonderful dipped in sweet and sour sauce. It’s inventively paired with thin slices of deep fried carrots, with a sweet potato french fry sweetness; and slices of fried jalapenos, that settle in with a slow build and some serious spice, better avoided by the less adventurous at the table.

The autumnal Lobster Bisque was one of the highlights of the night. Chilled chunks of fresh lobster meat are piled in the center of a bowl with thin sliced peppers and chives. The server poured the bisque over the top tableside and added a few grinds of black pepper over the top. It was a perfect dish for late fall/early winter, with the robust stew flavors washing over the chew of the lobster and a cozy, satisfying warmth.

Moving into the entrees, we strayed from the sea for a moment to experience their take on an 18-ounce USDA Prime Bone-in Ribeye Steak. Whisked from the grill to our table, there was a delicate char to the exterior and the inside was mouth wateringly tender, smoky, and marbled, with an inherent richness that rivals double-cut maple bacon. It was accompanied by the creamiest whipped potatoes we’ve ever had, probably a stick of butter per potato and worth every dessert-like calorie, and grilled asparagus that shared the wood-smoked quality of the meat. 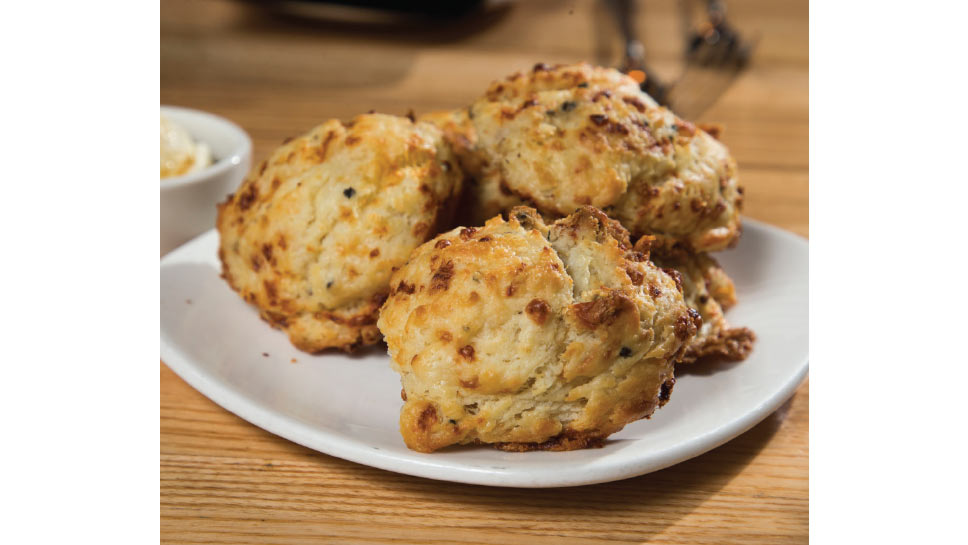 Back to the sea for the Char Crusted Ahi Tuna entree. This time they really surprised us, taking the lightest of seafood headliners and treating it like a red meat dish. The tuna is thick cut, coated in 22 spices and and seared to a tantalizing crunch keeping the inside sushi-chilled. It sits in an exceptional foyot sauce, a bearnaise with a veal reduction, that works even better with herb-parmesan crusted potato wedges that are roasted to be the perfect hybrid of baked potatoes and french fries. The asparagus that accompanied the fish was seared instead of smoked as it was with the steak, with far fewer citrus notes and much more organic garden goodness. With samplings of red and white wine at the table, this fish paired with a full-bodied cab-sauv’ like nobody’s business.

For dessert, it was recommended that we not miss out on the Carrot Cake. It was a nice thick slice topped in cream cheese frosting sprinkled with coconut shavings and a pool of creme anglaise with a massive, decorative carrot spiral. It tasted as good as it looked, a mixture of dense warm cake dotted with ground cloves and chopped nuts bookended in layers of creamy sweetness.