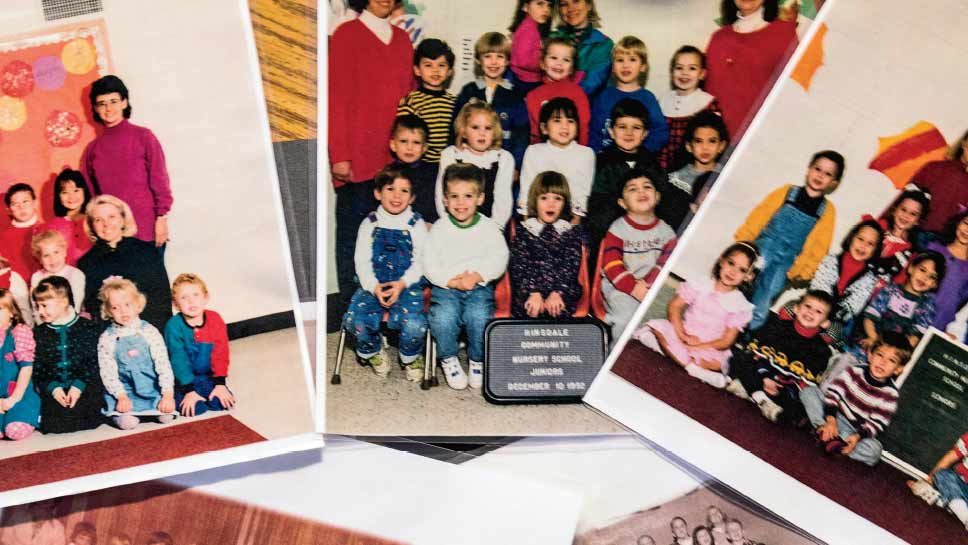 Founded by a group of can-do mothers during World War II, Hinsdale Community Preschool prepares to kick off a year-long celebration of its 75th anniversary. PHOTOGRAPHY BY JOEL LERNER

America was called to World War II in the spring of 1942 and, as Hinsdale’s men answered by enlisting, the women in town sought out their redefined tasks, too. The town was hunkering down.

Some women would play Rosie the Riveter, seeking industrial work in the war effort. They’d commute to Chicago to work or the massive munitions plant in Joliet. Some would consolidate home life until families were reunited. And it was during this tumultuous time that another group of can-do mothers did their part by building a co-operative nursery school aimed to give the next generation the best start in life.

It was visionary. It was necessary. And it continues to thrive to this day.

This fall, the Hinsdale Community Preschool embarked on a year-long celebration of its 75th anniversary with a series of events that reflect on where the school started, and where it’s headed in the future.

Organizers say that when the founding mothers got together that fateful spring, culture was changing rapidly. To guarantee stability for children during the coming storm, they sought to prepare 3-year-old and 4-year-old children for kindergarten and ultimately to be enthusiastic lifelong learners. 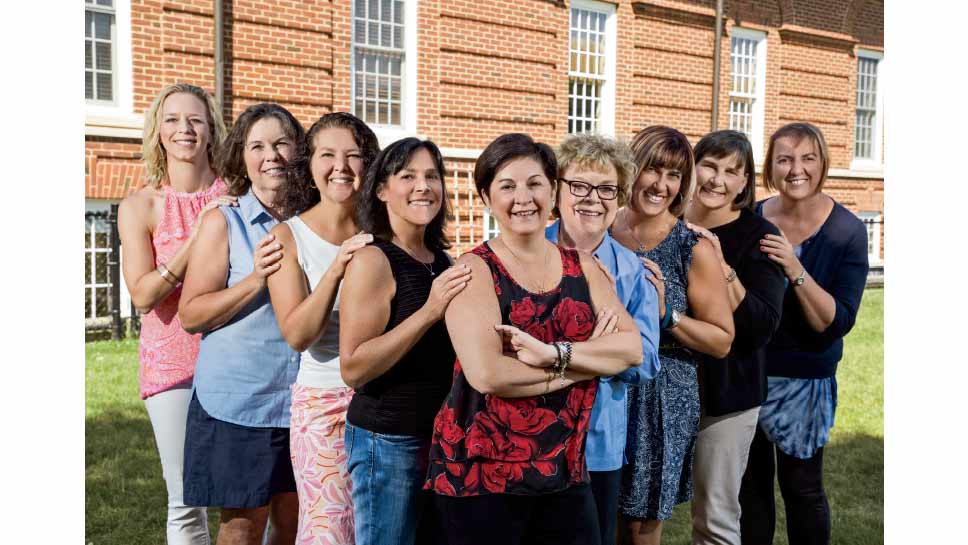 But these moms would do far more than simply deliver their young children to the new school. The preschool—then called the Hinsdale Community Nursery—would be run by parents as a governing board and then, often, as classroom volunteers and eventually fully invested teachers.

The children would be true students and would learn numbers, words, and eventually reading. Every month the mothers of those first classes would meet with the teachers to assess progress, resolve issues and plot ever-growing academic offerings. It would cost $10 a month and be delivered by professional teachers with the aid of volunteer moms in the classrooms. Parents would decide all the rules and standards. It would be joyful work.
That pattern endures.

That model reflected an experiment in American education—fully formed early education managed and democratically directed by parents. Seventy-five years ago, even the value of early childhood education was untested. Mothers who volunteer for the board if directors could have their children’s tuition forgiven. 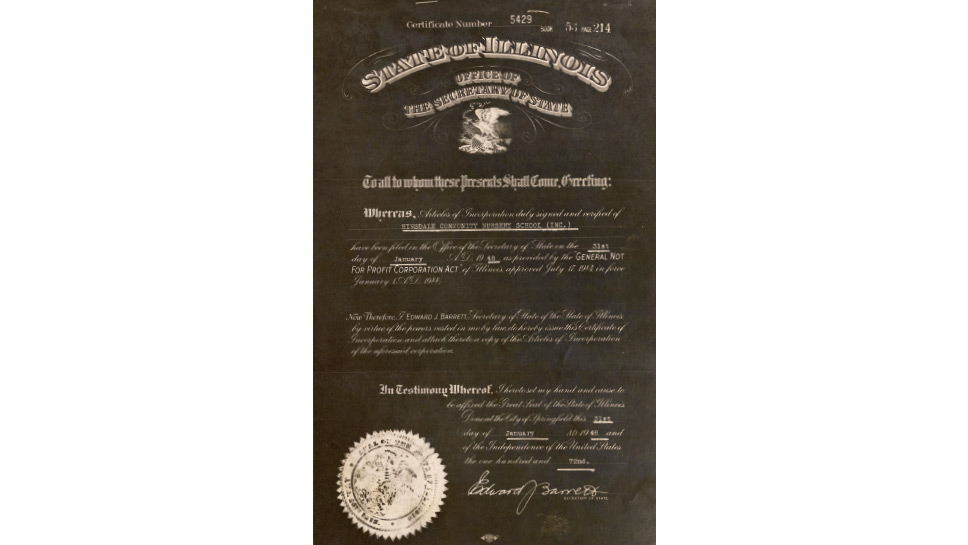 The pioneers included “Mrs. Eugene Kettering,” “Mrs. Richard Burgess,” “Miss McNamara,” and handful of others whose names have been lost to unwritten history. They are gone, too, and largely unrecognized, but their achievement has not gone.

The echoes of 60 happy children ricochet down the hallways in joyous abandon this fall. They are taught in the lower level of the grand Hinsdale Community House where the school has shared space since 1956.

They are singing, learning colors, sharing ideas with 2, 3, and 4-year-old peers. They are testing their wings. They are working, playing, and discovering which, at the Hinsdale Community Preschool, are slightly different light waves emanating from the same prism.

The school is deliberately and resiliently, as Director Ann Marie Berlino acknowledges, a “loving and fun” place. Its DNA the founders implanted. They were Hinsdale moms on a mission. But there is a special, more exuberant joy now. This is a birthday party that needs enough cake, ice cream, and candles to light up an entire year.

Seldom has a place, an idea, or a civic enterprise deserved a loud, giggling, song-filled birthday bash more than this one.

Take Kathryn Williams and Wendy Carter, for example. They are literally typical for “HCP”— as the school’s family calls it. Both mirror the pattern set 75 years ago. They were moms of 2-year-olds; then class room helpers; then advisory board members; then enrichment class teachers and then full staff teachers.

“I’ve sent four kids here,” Williams says with pride. “I was an elementary teacher for 11 years before so I was very much drawn to this, especially how parents are welcomed into the classroom.” 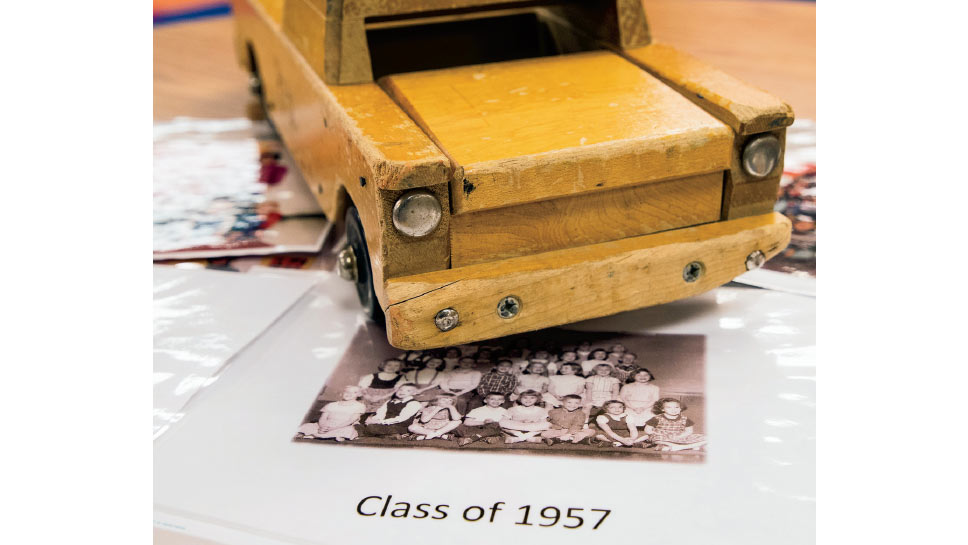 Carter’s two children were students beginning in 2009. What Berlino, Williams, and Carter share is devotion to the wisdom of committed families. “You are amazed to see a 2-year-old and know the mother was a student here, too. We have lots of those examples,” Carter says.

Berlino is particularly proud that parents with unlimited alternatives seek out HCP because the National Association for the Education of Young Children offers accreditation and validation. History reflects HCP graduates are prepared for the big leagues. Yes. Elementary school and beyond.

The school’s rolling party will be gently ebullient in the same cross-generational way the school always has functioned.

The star attraction will be 16-year-old Hinsdale High student Brian Schwab who seeks his Eagle Scout honors with a Preschool celebration project. He will lead school parents, students and teachers in decorating a rising wave of multi-colored tiles to adorn the school’s entry stairway. It will be a wave of memories that belongs to the 1,500 or so children who have “graduated.”

Thirteen years ago, Schwab was learning his numbers, colors and building his first friendships in the same classrooms. His wall of many colors will be a personal, artistic testimony to what the school means to families. They all own it. This is the third time in recent years that a local Eagle has earned his wings with a Preschool enrichment project.

The multiple celebrations will mirror the school’s tone.

“Joyous and welcoming,” says Berlino. “We have stayed close to our roots.”

She was recruited from New Jersey and knew co-op culture. Her two children also began education in co-op schools. “I know parents who say they drive by the building and their child says ‘That’s my school.’”

This is a beloved place on West 8th Street.

For more information about the Hinsdale Community Preschool, visit hinsdalecommunitypreschool.org.