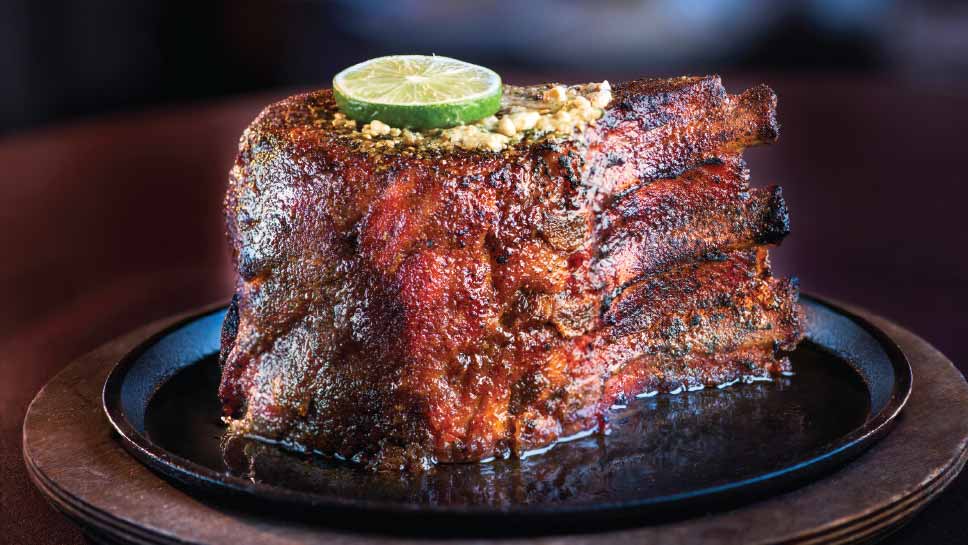 Perry’s Steakhouse & Grille proudly displays its 1979 origin as a Houston butcher shop and deli as soon as you walk through the door. A bright butcher’s case of thick, marbled meat sits next to the hostess stand. An interesting arabesque patterned wall behind the staff as you check-in is made from cowhides of alternating colors and, incidentally, is very soft to the touch.

We were then ushered into the dining room of crisp white tablecloths topped with blue cut glass bottles of water and a room full of lively conversation. Our table was next to an impressive wall of wine with a rolling library ladder for reaching the top bottles.

Our palates were primed with the Asian Ahi Tuna Tartare from the Starters menu. It’s the flavors of Hawaii perfectly plated with a decorative sprinkle of paprika surrounding it. Diced fresh tuna mingles with the flavors of avocado, sesame seeds, and ginger in a way that evokes sushi. It’s creamy, a little spicy, and very delicious. Fried wonton chips surrounding it are fryer crunchy and make the tartare very approachable but bury some of the more delicate flavors. 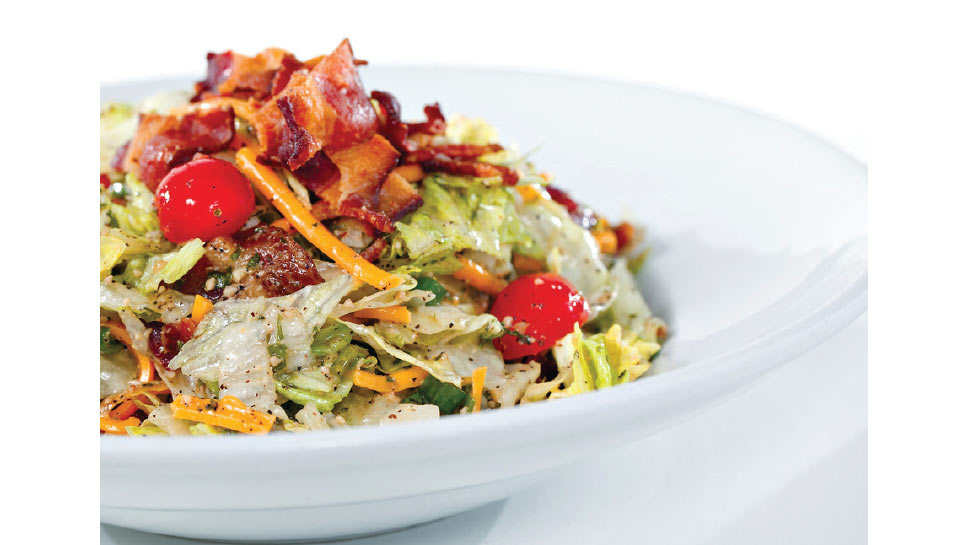 The Butcher’s Chop Salad was early proof that Perry’s main concern is leaning into really strong, very memorable flavors. The ingredients are simple. Garden greens tossed in a house-made Italian vinaigrette with shredded cheddar cheese, chopped chives, and halved cherry tomatoes, topped with two crisp strips of bacon. The key factor here is the intensely spicy vinaigrette chock-full of fresh chopped herbs and spices. Against the bright flavors of the vegetables and the soothing presence of the cheddar, it’s wholly unexpected and deliciously remarkable.

Our first experience from Perry’s Signatures menu was one of their tableside preparations. The Chateaubriand is a juicy filet steak coated in a thin layer of crisp grill char. It arrives on a sizzling skillet platter and the server cuts it into three medallions at the table, one for each of the three sauces on the plate.

To be clear, the meat needs no help from any sauce, whether the crisp grill-kissed crunch of the outer cuts or the tender pink center of the middle cut, the meat can stand on its own. If you’re going to add a sauce, however, they chose three distinctly different and beautifully executed flavors.

A peppercorn reduction catches at the back of the throat for a classic au poivre bite. The béarnaise herb butter sauce is extremely creamy, an excellent counterpoint to the rich meat. The best, though, is the truffle merlot demi-glace reduction—the steak may not need it, but you’re going to want it. The Captain’s Chateaubriand comes with grilled asparagus that’s been coated in Italian breadcrumbs and fried, topped with a few pieces of jumbo lump crab in herb butter. 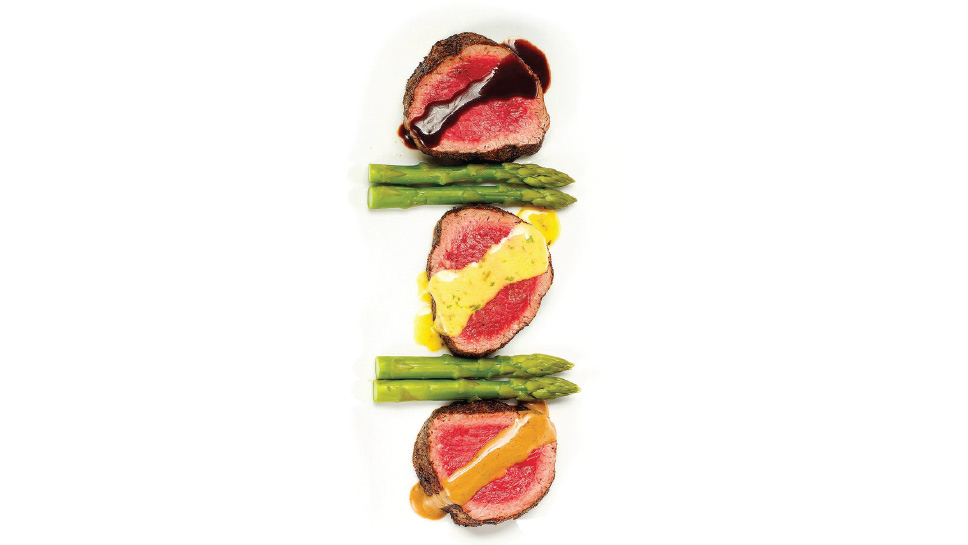 The other signature entrée that comes with a tableside carving show is Perry’s Famous Pork Chop. It’s an absolutely massive slab of Midwestern pork loin on a sizzling skillet platter. Perry’s covers the pork with a rub of proprietary seasonings, cures it, and then rotisserie roasts it over a pecan wood fire for six hours before it’s glazed, caramelized, and topped with more of their signature herb-garlic butter. You stopped reading, right? You’re driving there right now.

The Pork Chop is actually three cuts of meat and the server breaks down the story of each as he carves them at the table. There are three baby-back ribs, the smokiest bite; a center-cut loin, which they recommend for the applesauce pairing; and what they call the “eyelash,” the most marbled, succulent, and incredibly tender section. Three pork experiences in one order, all covered in a rub so savory you’ll need to re-hydrate afterward. It’s the kind of entree you’ll tell your friends about later.

Speaking of tableside showstoppers, there are three desserts they flambé right in front of you. We chose the Nutty D’angelo. They rolled out a single burner on a tray and melted a pad of butter in a frying pan, added crushed pecans, brown sugar, cinnamon, and then tossed in a shot of brandy producing a two-foot-tall flame. That delicious carnival concoction is poured over a big scoop of vanilla ice cream encased in a hardened shell of white chocolate over a plate crisscrossed with a web of housemade chocolate sauce. All of the flavors are simple and perfect, evoking both a hot fudge sundae and cinnamon caramel pecans.