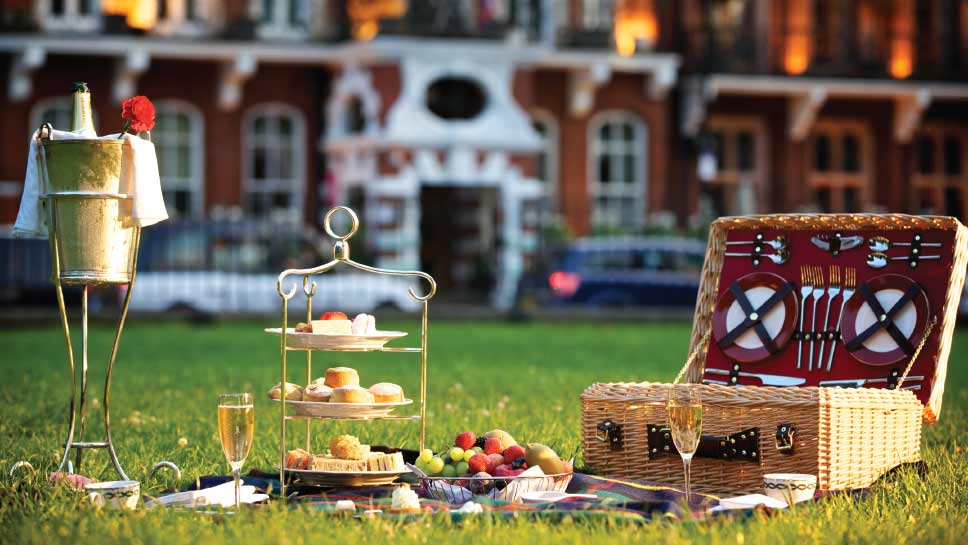 You’ve done the Harvey Nichol’s shopping binge and watched the guards changing at Buckingham Palace oh so many times. Now come experience the splendor of London town through the imaginary lens of some of its most iconic characters—real and imagined.

Think of London and where does your mind wander? Kensington Palace and the royals (can we get enough of Prince George and Princess Charlotte)? William Shakespeare and the old (yet newly imagined) Globe Theatre? Do you think of Sherlock Holmes, Charles Dickens, and the filmography of James Bond? Or are your favorite London figures more of the Harry Potter and Bridget Jones variety?

London is one of the most iconic, and (in certain “royal boroughs”) one of the most decadent cities in the world. But part of the richness of its splendor comes from these stories and the characters of film and literature it has conjured in the minds of we American travelers.

When given the opportunity to return to one of my favorite European cities earlier this year, I opted for an itinerary not occupied by the obvious. I’d been to London before, as I’m sure have many of you. In lieu of treading the usual haunts, I opened my imagination to a different take on the city that Pulitzer Prize-winner Anna Quindlen once called “a novel in itself.”

The result was a week spent exploring London from a fabulous flat in London’s Chelsea neighborhood and a list of customized tours that ranged from a morning wandering through Virginia Woolf’s storied Bloomsbury neighborhood to an evening walking in the paths of royals at The Ritz Hotel (also the setting of many films, including Notting Hill). 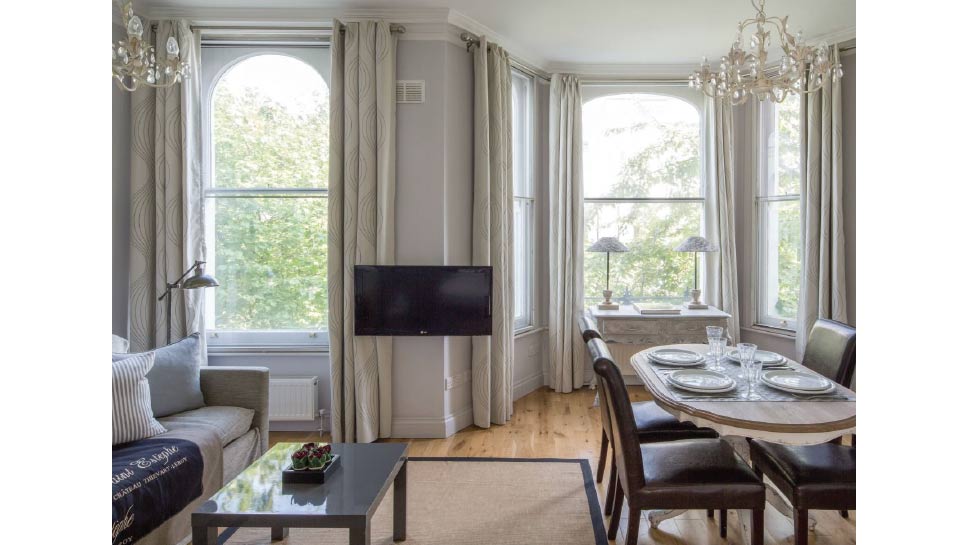 As Quindlen implied in her Imagined London book, experiencing the city this way allows the neighborhoods to unfold to you the way our favorite books, movies, and plays unfold the characters and places we adore.

Touring Buckingham Palace is one thing. Passing through the room in the William Kent House where Queen Elizabeth celebrated her 80th birthday (on the way to your own decadent dinner at The Ritz London’s magnificent dining room) is another. The same could be said for walking down the streets that were the setting for so many of Jane Austen’s novel’s (remember Gracechurch Street from Pride and Prejudice?)

With that in mind, we’ve put together a concierge-style directory to help savvy travelers see London from the lens of a favorite author, playwright, or film character.

London is a major global metropolis so choosing the right place to base your adventure is key. While some of the trendy tours (such as Warner Brothers Harry Potter Studio Tour, wbstudiotour.co.uk) are located on the outskirts of London, we recommend staying in and around Kensington, Mayfair, or Chelsea area (because even on a “city of stories”-style tour, you still need to shop). 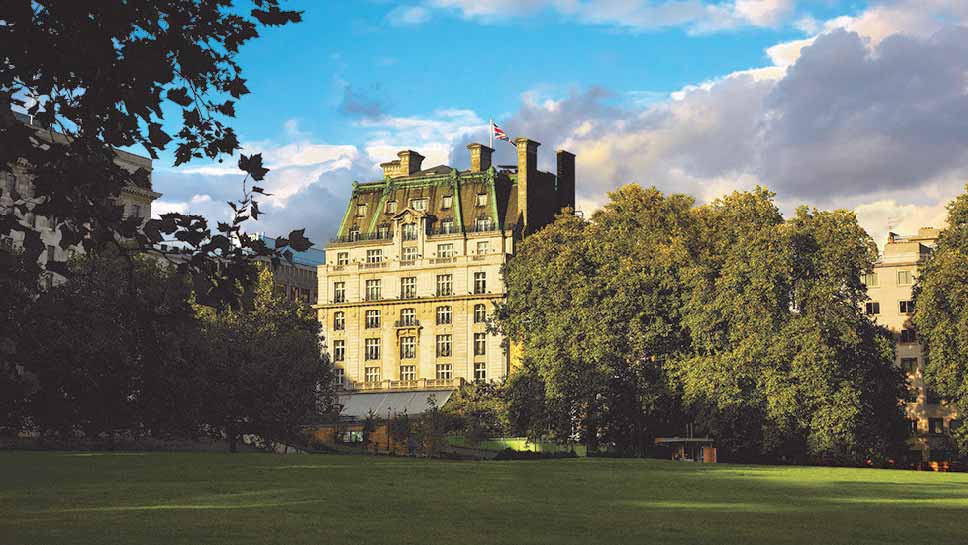 Luxury hotels abound (and you may already have a favorite) but if you seek something extra special, we recommend the following:

London Perfect: The next best thing to having a best friend with a London apartment is booking a flat through London Perfect. Recommended by Town & Country magazine and other national publications, this is the créme de la créme of vacation rentals. I was thrilled with the beautifully appointed two-bedroom, two bath Chelsea flat that we called home for our week in London. Greeted by a bottle of champagne and the availability of a private driver, it was truly like being welcomed home. Located in some of the most sought-after postal codes (favored among London elite) the apartment where we stayed had all the signature features of a London Perfect rental—proximity to chic shops and the finest shopping. Kings Road is never far away. For more information, visit londonperfect.com.

Green Park Suite: The Ritz London has been home to dignitaries and members of the royal family for generations, but recently they unveiled a new luxury two-bedroom suite that feels more like a personal pied à terre. The Green Park signature suite is essentially a private apartment on the seventh floor that comes with views of The Royal Green Park and Picadilly. There is a master bedroom with en-suite bath, superior king room with bath, living room with large marble fireplace, and an oval-shaped dining table for six people and private kitchen. And if that’s not enough space, you can connect to the adjacent executive suite. Complimentary services include personalized 24-hour service from a Ritz Butler as well as an airport transfer in the hotel’s iconic Ritz Rolls-Royce Phantom. For information, visit theritzlondon.com. 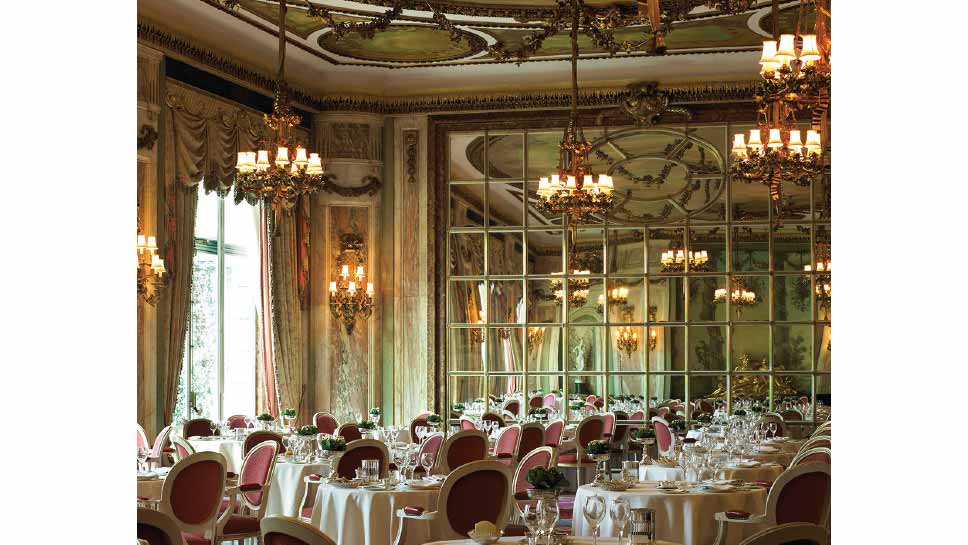 This is the part where you make a list of favorite authors, films, and literary landmarks to visit (see our sidebar for expert resources). Meanwhile, here are a few recommended pairings:

The Fitzroy Tavern in Fitzrovia (16 Charlotte Street) is already legendary for its stories of drunken authors (including Dylan Thomas and George Orwell) and debauched evenings (Dr. Who fans are also reputed to gather here) but for the more elegant traveler, nothing quite tops an opulent drink at The Rivoli Bar and Cocktail Lounge on Picadilly in Mayfair. We loved the signature cocktail with solid gold flakes and a brown sugar cube. We especially loved the whispers of which local celebrities had already been spotted at the Art Deco landmark that evening. Shh… 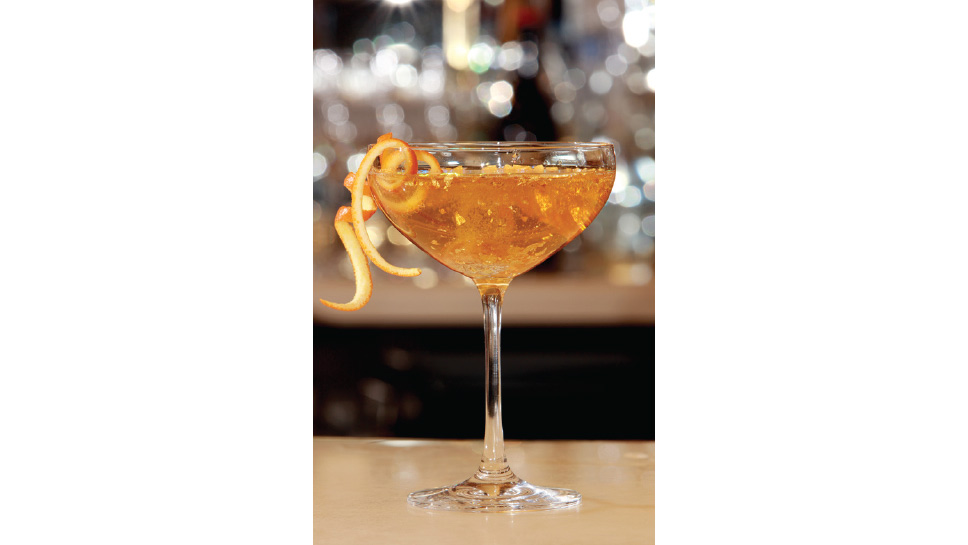 The signature cocktail at The Rivoli Bar

The Ritz London has fabulous high tea (unconfirmed rumor has it that Prince William used to chase his little brother Harry in the tea room when they were toddlers). Once home to ambassadors and barons, The Milestone Hotel at 1 Kensington Court (which dates to 1689 and is located right next to Kensington Palace and The Royal Albert Hall) is a five-star option for a variety of teas that range from “picnic in the park” to a very distinguished gentleman’s tea (perfect companion for a tour of James Bond movie sites or a stroll through Sherlock Holmes’ London). Visit milestonehotel.com for more information. 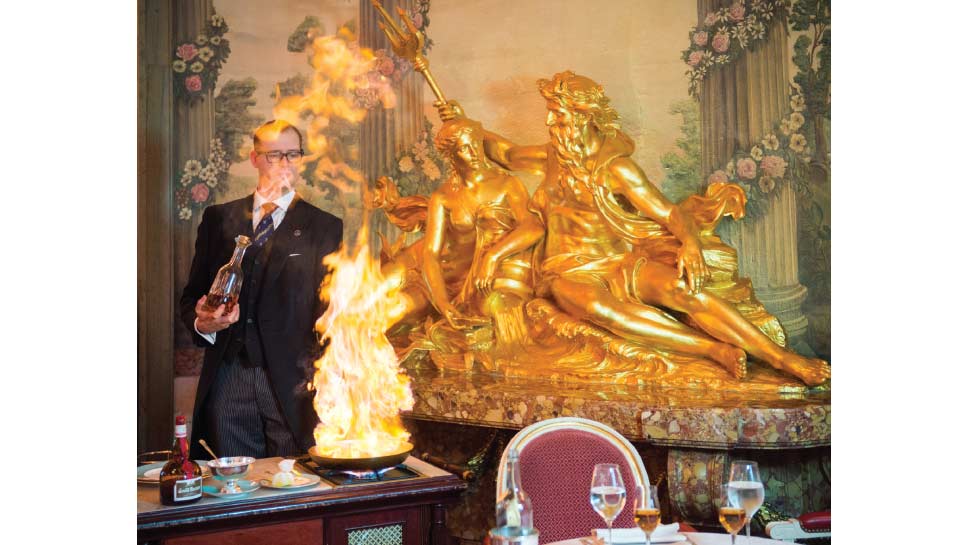 Crêpes Suzette at The Ritz London

London always has its fair share of trendy restaurants and top spots of primo people watching, but a story-focused itinerary deserves at least one evening at a London legend. I’ve personally dined at The Ritz London’s French baroque restaurant several times over the years and once even had the opportunity to cook with Chef John Williams in the kitchen. A visit back to The Ritz (with a stop off at the famous elevator shown in the film, Notting Hill) did not disappoint. It’s easy to see why they were just awarded a Michelin star in 2017. The environment alone was like being in a film, and a dramatic crepe suzette flambe was the perfect flourish to end the night. 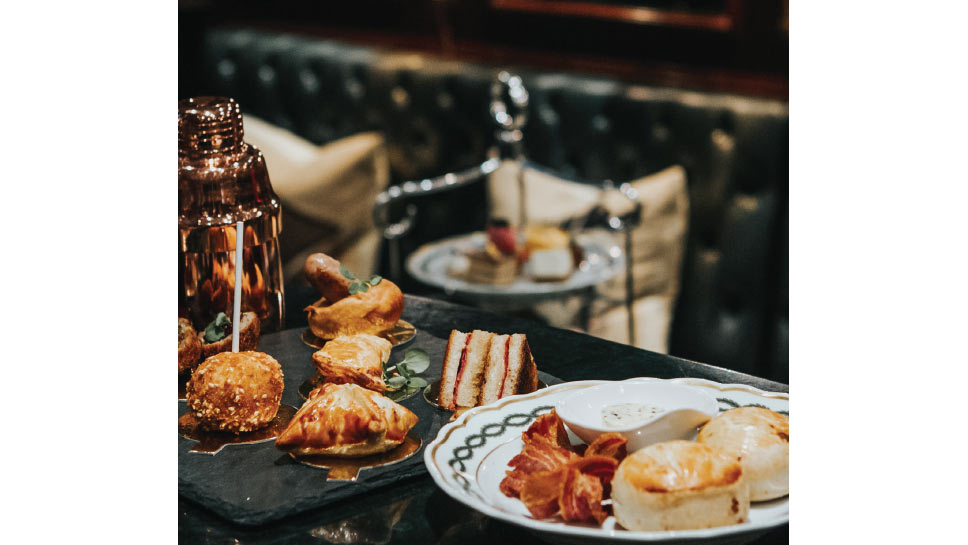 The gentleman’s tea at The Milestone Hotel

The scene is set. The plot is in motion. Now it’s time to get in character. The volume of writers and filmmakers who have either called London home or based their works here is almost endless. Here is a short list of popular figures and two concierge-style tour purveyors In London that can help you customize your itinerary. 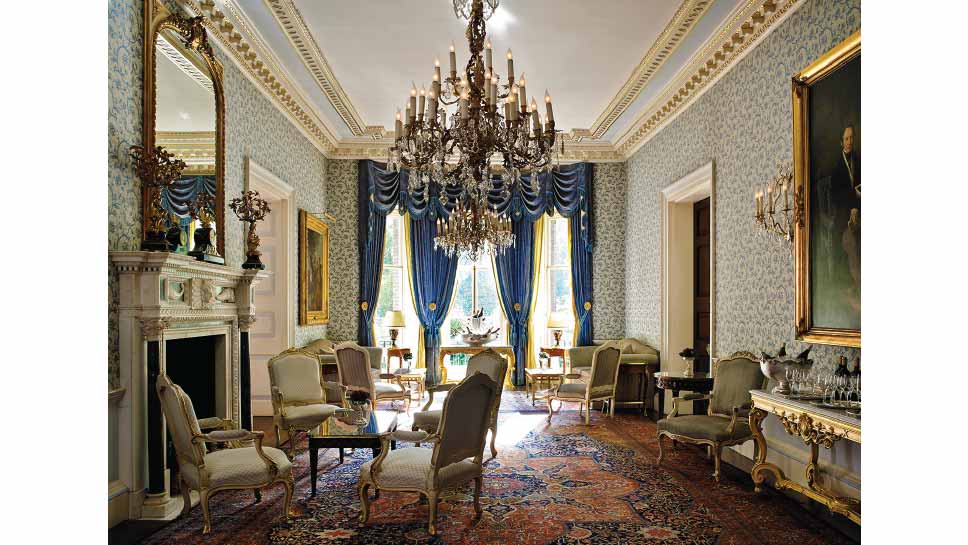 The Queen Elizabeth Room at The Ritz London

While Virginia Woolf did live outside of London for part of her life, the author’s Bloomsbury years are perhaps among the most influential. It was in this neighborhood that she and other artists and writers of the day formed what was known as the Bloomsbury movement. With help from CityUnscripted, I arranged a tour that included Woolf’s famous addresses in London with a few other literary stops along the way, including the homes of Charles Dickens and Jane Austen and even a stop at Pancras Train Station to visit Harry Potter’s fabled Platform 9-3/4. The City Unscripted guide (a local book maker) took my son and I on buses and through London’s narrow passageways for a morning to remember. The great thing about this group is that the tours are given by locals and can be specified to absolutely any topic. You’re interested in James Bond? They can take you to every movie site in London, with a little trivia thrown in.
For details, visit cityunscripted.com. 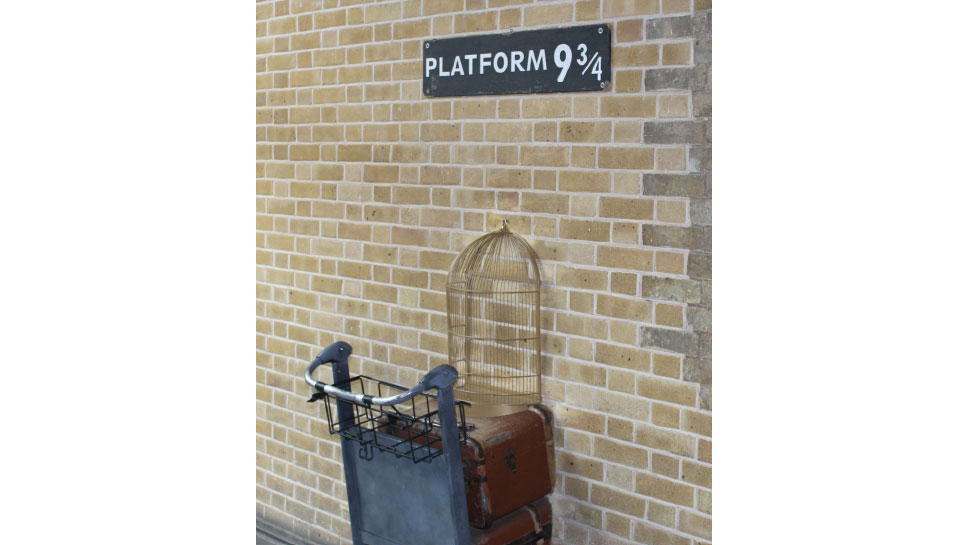 Shakespeare fans will already have Stratford on their itinerary, as they should. But exploring Shakespeare’s London is as much a history lesson as it is a tour through the playwright’s legacy. In addition to a stop at Shakepeare’s newly reimagined Globe Theatre on the Thames (the 1599 theater burned a long time ago) I would recommend taking one of the Yeoman Warder tours at the Tower of London. These tours need to be booked separately and are often overlooked but definitely well worth it. The pairing of the bloody real-life history of London’s monarchy (including a stop at the chapel where Ann Boleyn is buried) by these Royal officers (all who live at the tower with their families) puts a different spin on the comedies and tragedies we all love. Expert tip: Don’t call them “beefeaters.” For more information about a Globe Theatre tour, visit shakespearesglobe.com. For more information about the Tower of London Yeoman Warder tours, visit.hrp.org.uk/tower-of-london/explore/yeoman-warders. 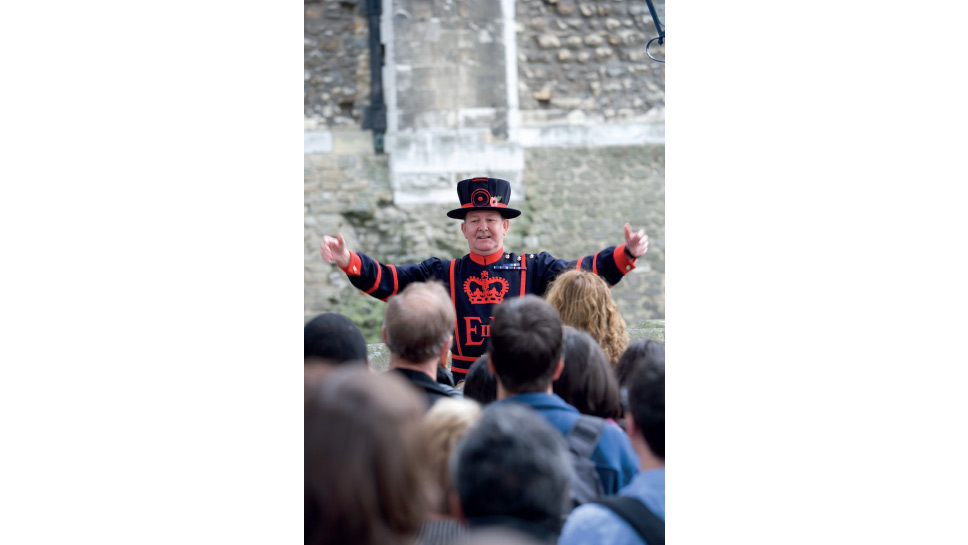 Yeoman Warder at the Tower of London

Ah, Bridget. What Helen Fielding fan didn’t love watching their favorite diary-toting character come to life on the big screen in all of London’s fashionable glory? While Bridget Jones is hardly Austen’s Elizabeth Bennett (though she certainly aspires to be) the success of Bridget Jones’ Baby (where she finally gets her Mr. Darcy) is noteworthy enough to merit inclusion. Brit Movie Tours can show you around all your favorite Bridget Jones rom-com movie locations, as well as a long list of other favorites. In addition to extensive Harry Potter bus and walking tours, Brit Movie Tours can also arrange explorations of the city based around such British favorites as BBC’s Sherlock Homes, Da Vinci Code, Downton Abbey, Paddington Bear, and James Bond. Outside of London, they even offer tours around Game of Thrones sites. For details, visit britmovietours.com.