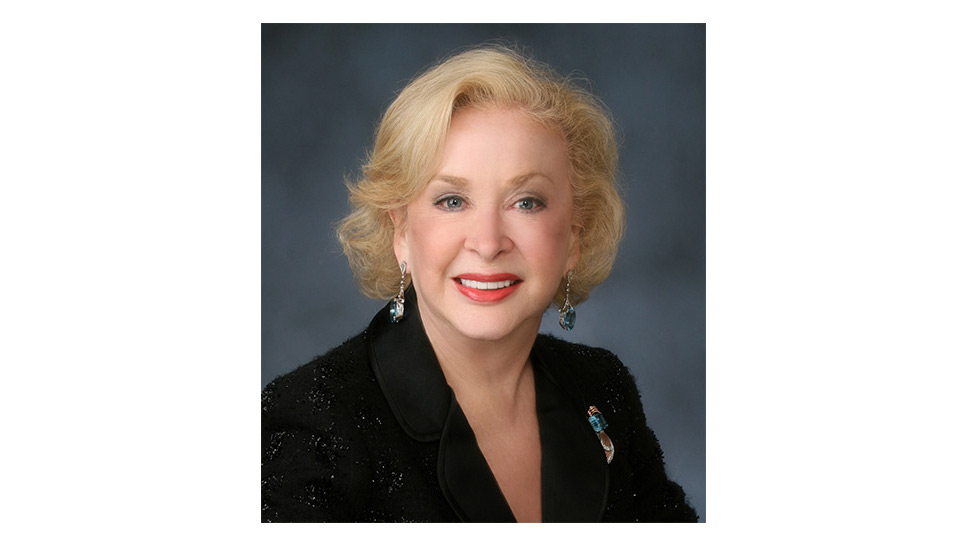 Nancy Welch Knowles, an executive committee member of Lyric Opera of Chicago’s Board of Directors, passed away on Saturday, August 26. She was a longtime resident of Hinsdale. Ms. Knowles was president of The Knowles Foundation and former chairman emerita of Knowles Electronics Holdings, Inc., a leading manufacturer of subminiature electronic components.

Ms. Knowles joined the Lyric Opera Board of Directors in 1998. She generously supported many operas, campaigns, and programs for almost two decades. In 2014 she was presented with the Carol Fox Award, Lyric’s highest honor.

Lyric named the Nancy W. Knowles Lobby in 2007, in recognition of her extraordinary contribution to the Campaign for Excellence, the largest gift in the company’s history. The Nancy W. Knowles Lobby, at the corner of Wacker Drive and Madison Street, is the elegant entrance to the Lyric Opera House. This lively reception area, where the bronze bust of Lyric’s founder, Carol Fox, is displayed, leads to the Daniel F. and Ada L. Rice Grand Foyer.

In 2014, a generous gift from Ms. Knowles to the Breaking New Ground campaign resulted in the creation of the Nancy W. Knowles Student and Family Performances, under which all Lyric Opera and Lyric Unlimited programs geared towards students, families, and school performances are presented.

“The Lyric Opera family is deeply saddened by this loss,” said Anthony Freud, Lyric’s general director, president and CEO. “Nancy Knowles was an extraordinary woman, a consummate professional, and an outstanding philanthropist. She possessed great strength and character, and was passionate in her devotion to the arts.”

“Nancy was a cherished member of the Lyric family and will always be remembered for her sparkling wit, her understated elegance, and her warm smile,” said David Ormesher, chairman of Lyric’s Board of Directors. “Nancy’s infectious optimism and enthusiasm for Lyric inspired us all, and she will be missed.”

Ms. Knowles was a member of the opera company’s Guild Board 1993 through 1999, having first become a Lyric Opera donor in 1990. “As a member of Lyric’s Board of Directors since 1998, Nancy sponsored numerous opera productions and also supported every major project and campaign,” said Mary Ladish Selander, Lyric’s chief development officer, who worked closely with Ms. Knowles for more than two decades and was a close friend.

“Nancy was one of Lyric Opera’s most enthusiastic and devoted supporters,” said Allan B. Muchin, Chairman Emeritus, Lyric Opera of Chicago Board of Directors. “Her smile, friendliness, and optimism will never be forgotten.”

For much of her professional life Ms. Knowles was one of the few women in the room, if not the only one. A native of Fort Dodge, Iowa, she earned her bachelor’s degree in languages from the State University of Iowa (in Iowa City), and returned to her home town as a Spanish translator for Fort Dodge Laboratories, a pharmaceutical company. She subsequently worked for Pickands Mather, a mining-related firm in Cleveland.

Ms. Knowles came to the Chicago area in 1974 at the invitation of Hugh Knowles, the founder of Knowles Electronics, a world leader in subminiature electronic components and the largest manufacturer of microphones. (Mr. Knowles, who founded the company in 1954, was one of the nation’s leading acoustical researchers and engineers.)

With no knowledge of the sub-miniature electronic hearing instrument components manufactured by Knowles Electronics for hearing-aid manufacturers, Ms. Knowles started in new product development, “surrounded by engineers and physicists,” as she recounted in 2007. Charged with being a set of “new eyes,” she proceeded to learn the business through listening, observing, and questioning.

Ms. Knowles recalled in 2007 that she initially encountered “a bunch of men who were stubborn as hell! I had no voice for a long time. They didn’t understand me and they didn’t hear me. I had to earn the right to speak and be heard and accepted.”

Ms. Knowles’s hard work and cheerful persistence eventually won her colleagues’ respect. She found the learning process exhilarating, and ultimately she found the job “wonderful. I absolutely loved it. It was a fabulous company. We were truly global. We were manufacturing, selling, and distributing in foreign countries, with an incredibly accurate and reliable shipping and delivery system. Eventually the management team created a living document to assist the managers in long-range planning, and I was involved with that process. I love strategic planning! To be able to help millions and millions of people with hearing around the world is astounding.”

Nancy married Hugh Knowles in 1979. He was chairman and she was vice-chairman of the firm. He suffered a serious stroke in 1980 and was homebound; she continued to work and “would bring home the issues of the day to discuss with Hugh, and would bring back the answers the next day,” she recalled. “Over time, we finally reached the point where he would say, ‘What do you think we should do?’ and eventually he said, ‘You can do this.’ He’d trained me for a long time.”

By the time Hugh died in 1988, at the age of 84, Ms. Knowles recalled that she “had a voice – I was part of the team. I had as much input as anybody.” She became Knowles Electronics’ chairman after her husband’s death, a position she held until the company was sold, in 1999.

After the sale, Ms. Knowles retained leadership of The Knowles Foundation, which was established in Illinois in 1955 and supports the arts, education, health, international development, and social services. In 1994 The Knowles Foundation donated an assistive listening system for the refurbished theater of the Civic Opera House (now called the Ardis Krainik Theatre) as part of the Building on Greatness Capital Campaign. The system continues to benefit many thousands of Lyric ticket-holders each season.

As a philanthropist, Nancy Knowles supported many organizations beyond Lyric Opera, including Loyola Medical Center, Elmhurst Memorial Hospital, and The Rehabilitation Institute of Chicago (now the Shirley Ryan AbilityLab). A portion of the education and acting center at London’s fabled Shakespeare’s Globe Theatre, The Nancy W. Knowles Theatre, was named in her honor, and is known as “The Little Nancy Theatre.”

In 2007, at the announcement of her major gift to Lyric, Ms. Knowles said, “One of the things I absolutely enjoy about giving as a woman is when the majority of the people in the room who are giving are men. It’s an absolute thrill!”

Of her career trajectory, Ms. Knowles said in 2007, “I’m a woman who did it myself. I had some help, had a good mentor, and I took advantage of that. I learned and I grew. I paid attention, and not only grew the business but grew in my personal life and my ability to give back. It’s very exciting.”

Ms. Knowles’s father (an orthopedic surgeon who invented the Knowles Pin, which is used to set broken bones) had a huge collection of 78 rpm records, many of them operatic, and relished driving the family 100 miles to Des Moines to go to the opera. Her love of “the costuming, the wigs, the staging, and of course the music!” grew with adulthood. She named Plácido Domingo as her favorite artist, and Puccini, Mozart, Verdi, and Bizet as her favorite opera composers.

Said Ms. Knowles in 2007, “Giving back to the community is important and very personal to me. The projects I have supported over the years are worthwhile, and the people involved have become particularly special. When I have a significant personal relationship with an organization, I support it at a higher level.”

A funeral will be held on Thursday, August 31, 2017, at Notre Dame Catholic Church, 64 Norfolk Avenue, Clarendon Hills. Lyric Opera artists will perform at 10:15am, followed by a 10:30am Funeral Mass. In lieu of flowers, memorial contributions may be made to Lyric Opera of Chicago, Loyola Medical Center, Elmhurst Memorial Hospital, or Rehabilitation Institute of Chicago (now known as Shirley Ryan AbilityLab).

Submitted by the Lyric Opera of Chicago