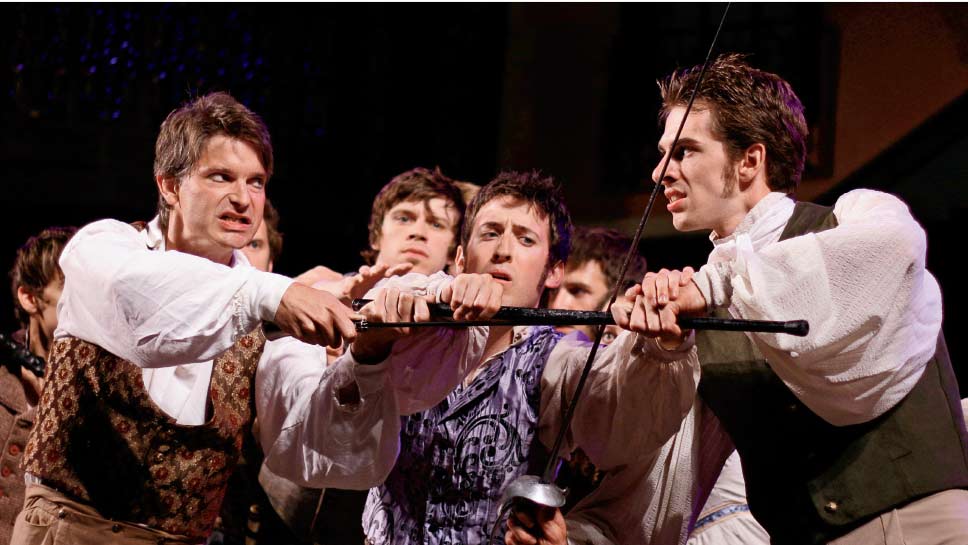 When First Folio Theatre launched its first production at the historic Mayslake Peabody Estate in Oak Brook 20 years ago, residents got to see the work of William Shakespeare presented in its purest form. Today, the company continues to grow and flourish, continuing its mission to produce works from that iconic First Folio of 1623. PHOTOGRAPHY BY ROBIN SUBAR

What’s in a name? If we’re talking about the First Folio of work by William Shakespeare, quite a bit. Possibly even a clue or secret hint for stage direction.

David M. Rice of Clarendon Hills built a theater company around that very notion—launching First Folio Theatre with his late wife Alison C. Vesely 20 years ago. The idea was to do Shakespeare in its most authentic form, producing plays from the first folio that was published in 1623, spelling mistakes and all.

“We go back to the folio text,” explains Rice one recent weeknight during a rehearsal for First Folio’s summer 2017 production of As You Like It at the historic Mayslake Peabody Estate in Oak Brook. “The folio method works under the premise that the strange spellings are actually clues to Shakespeare’s actors. The theory is that the same word can be spelled different ways and his choice of spelling gave actors clues as to what words and meanings Shakespeare wanted to stress.” 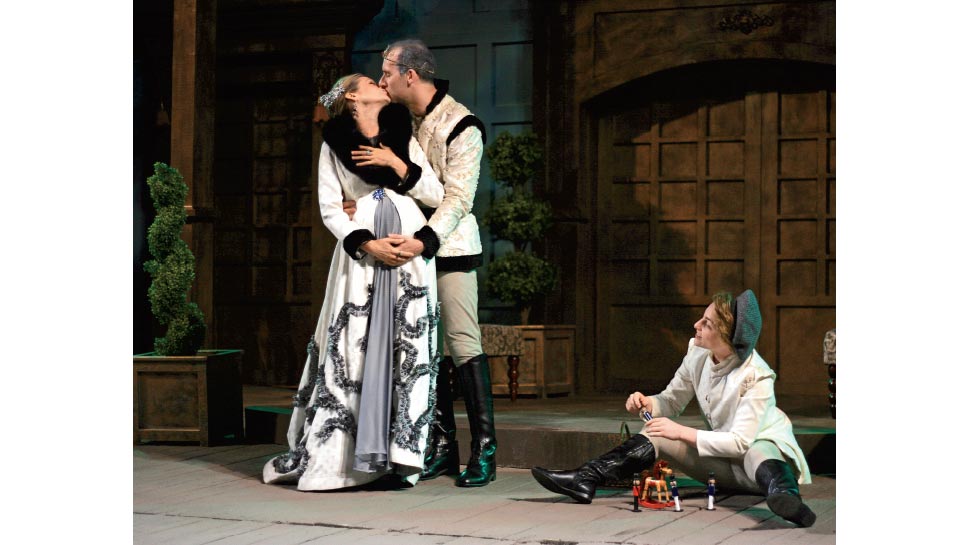 It’s something Rice, an accomplished Chicago actor and teacher, had always wanted to pursue. And the timing to partner with the Peabody Estate couldn’t have been more perfect.

The Gilded Age mansion, now known as Mayslake Hall, was in danger of being demolished. A group of area residents got together to figure out how to save it in some way.

“One idea was to create an arts center,” says Rice, explaining that First Folio is just one part of the newly reimagined and repurposed landmark. “But I loved the idea of doing Shakespeare outside the way it was meant to be performed. So we built a stage to resemble some of the Shakespeare-era stages built in England.”

The first production in 1997 was The Tempest, which was the last play Shakespeare wrote alone. A few weeks ago, First Folio Theatre opened As You Like It, which continues through August 20.

Skyler Schrempp, who is directing a cast of accomplished actors from throughout Chicago, says she believes very strongly in the importance of the folio method in producing Shakespeare.

“It’s like written music but for spoken word. I find that usually when an actor is having a difficult time with a passage, all they need to do is look at what’s in the text and there’s usually an answer there,” says Schrempp, who worked with First Folio as an actress in a production of Cymbeline four years ago.

While this is Schrempp’s directorial debut with First Folio, she has much experience working with Shakespearean text. 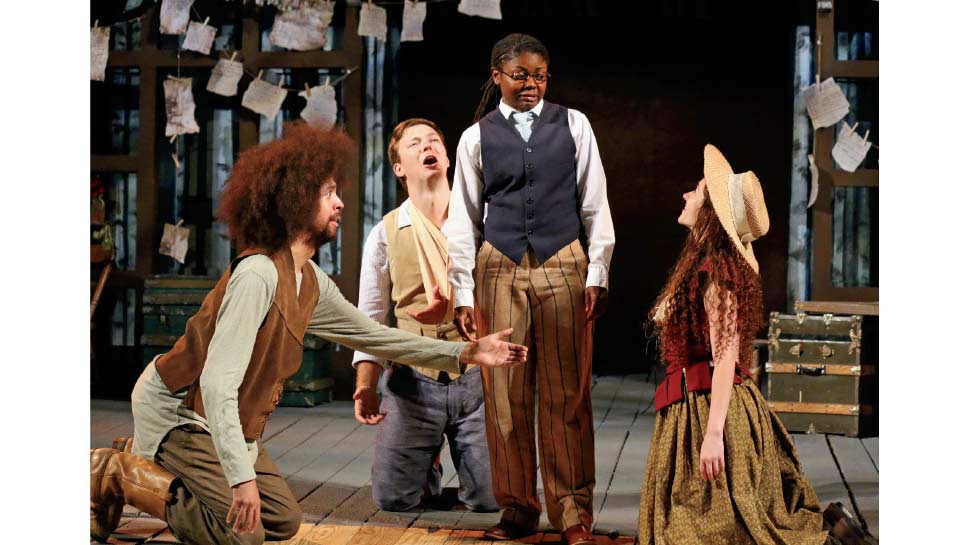 “I run a program called The Viola Project, which is a feminist Shakespeare program for young women, and I’ve also taught Shakespeare in Chicago Public Schools,” she says. “I believe storytelling is storytelling, whether you’re with young people or adults. I will say that a large part of the rehearsal process is about bringing joy and play back to adult actors.”

While First Folio Theatre productions relish in the joy of deciphering a first folio text, the direction and vision can sometimes be quite contemporary. In the current production of As You Like It, several time periods are covered.

“Our version, and I say our version because the cast has been instrumental in shaping the piece, is one that I hope lives in a place of honesty. We are absolutely living in a heightened theatrical world. You’ll see costumes that pull elements from several different time periods,” Schrempp says. “But at the core of our story is a narrative about what happens when we live as we think we should, versus what we inhabit in our most authentic selves.”

Rice says it is a pleasure to continue to bring Shakespeare to such a beautiful outdoor setting for so many years. Audience members are known to bring chairs, blankets and sometimes even full picnics, enjoying an evening not often found in the western suburbs.

However, First Folio Theatre today is about much more than Shakespeare in the park. The company’s 21st season opens on the indoor stage October 7 with a world premiere of The Man-Beast by Joseph Zettelmaier, followed by a Chicago premiere in 2018 and another world premiere before the end of the season. 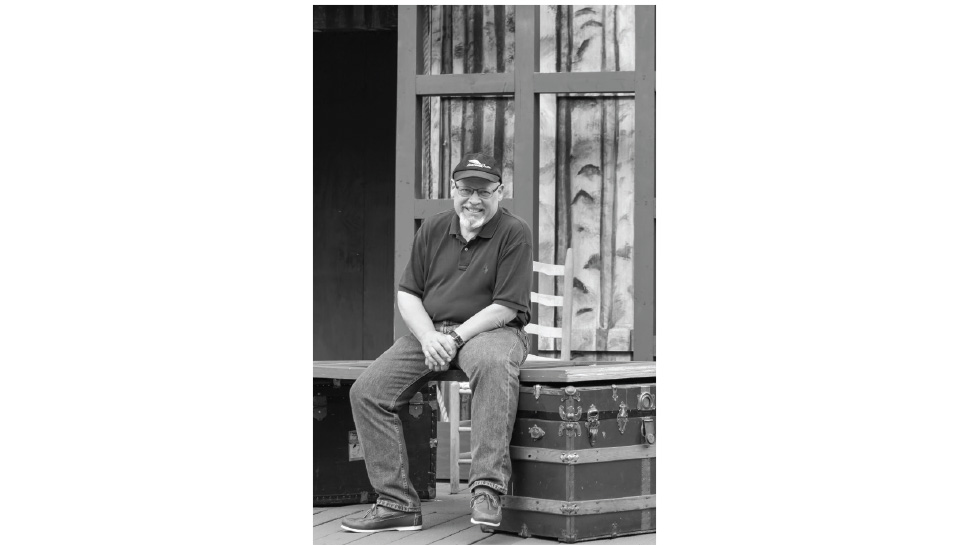 “We have certainly come a long way but it’s never easy in the arts,” Rice says, reflecting back on the company’s prestigious awards and grants over the last 20 years. “The most important support comes from individual donors, and we have been fortunate to have many supporters here in the Oak Brook community.”

Mayslake Hall, which is now managed as part of the Forest Preserve District of DuPage County, is in a continued stage of restoration. First Folio Theatre is now an important anchor—one that Rice hopes that the community will continue to embrace and support.

“I got a call recently from someone who had just heard about our summer Shakespeare productions. He was excited to come and asked where we were located,” says Rice. “I told him about our location and he said ‘no way, I drive down 31st Street every day on my way to work’. That just shows that we still have more work to do to get the word out.”

First Folio Theatre is located at the Mayslake Peabody Estate, 1717 West 31st Street, in Oak Brook. For more information about As You Like It or First Folio Theatre’s 21st season, call 630-986-8067 or visit firstfolio.org.