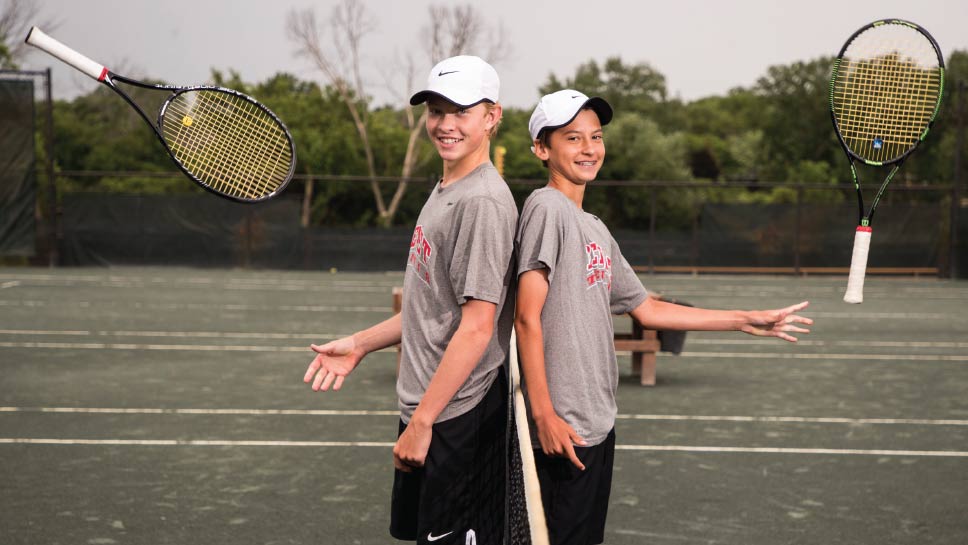 A doubles team from Benet Academy proves they’re ready to “cheese up.” PHOTOGRAPHY BY JOEL LERNER

Benet Academy tennis players Casey Schrader and Danny McGuigan defied big odds this season. At first glance, the pair of freshmen appeared to be anything but among the state’s most formidable doubles teams.

Schrader lists himself as 5-feet-8 plus a half inch, always playing with his white Nike hat that replaced the one he wore so often that the logo eventually came off. McGuigan, the younger brother of standout Patrick, says he’s 5-5 “on a good day.”

“I think everyone was taller than us,” Schrader says. “We played some behemoths that were just giants.”

At the IHSA state tournament, Schrader and McGuigan finished an all-state fourth in Class 1A. The Redwings also were third for their first top-three state trophy in the first two-class state format.

“I was just thinking about making the tournament and maybe winning a round or two. I never thought we’d make it that far,” McGuigan says. “I learned that I was capable to hit with some of the bigger guys, some bigger teams, and overpowering can’t really handle the match in doubles. It’s more placing balls and picking out weaknesses.” 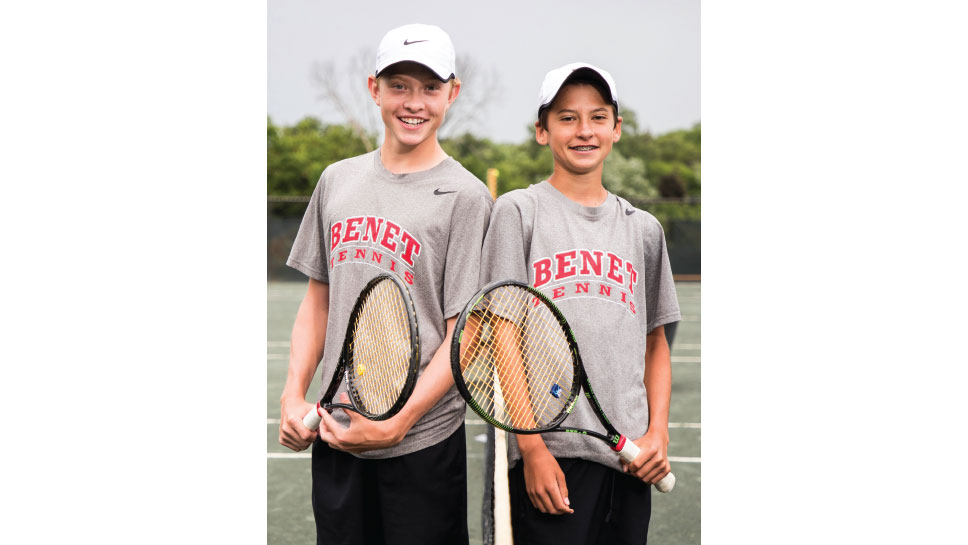 Schrader and McGuigan (30-11) have played tennis regularly since age 8. Schrader currently trains at Naperville Tennis Club and McGuigan from Burr Ridge at Score Tennis & Fitness. They knew each other through USTA singles competition but with little doubles experience and none together.

As No. 9-16 seeds at state, they enjoyed their sweetest victory in the quarterfinals, rallying 2-6, 6-4, 6-4 over Normal University junior Josh Friesen and sophomore Carter Burk, the No. 2 seeds. Benet trailed 4-2 in the third set.

“One of their players was probably about 6-1 and one about 6-4,” Hand said. “There’s always that David and Goliath (as freshmen). In another way, they’re very good players. You’re not taking anybody by surprise (at state), but doing the things you need to do, no matter what size you are. If you can play, you can play.”

Even during tryouts, Schrader and McGuigan emerged with Patrick McGuigan and seniors Teddy Evans and Phil Piscopo.

The McGuigans did play one doubles match together, comfortably winning in two sets. However, Patrick, who tied for seventh at 2016 state in doubles, wanted to play No. 1 singles as a senior before playing at Denison University. Evans and Piscopo previously played No. 3 doubles.

With Danny McGuigan left handed and Schrader right handed, their forehands would cover the center of the court.

“We like to communicate what we’re going to do each point and strategy to adjust,” McGuigan explains. “I liked doubles more because if you made a mistake, he could just back you up and if you were getting down, you could build up confidence.”

Moments before the season opener, the freshmen learned they were playing No. 1 doubles. They lost the first set but eventually prevailed in a third-set tiebreaker.

“I wanted to play doubles with Danny from the beginning of the season,” Schrader said. “I was intimidated before the match, but when I was on the court, it just all went away.”

“They really enjoyed playing together,” Hand adds. “Being two freshmen, that was the innocence coming into it, really experiencing everything for the first time, and their success led to more success.”

Determination became a trademark. During a match in seventh grade, Schrader felt a stress fracture in his right shoulder that sidelined him for seven months. Schrader could barely lift the arm yet won the final game and the match. For the freshmen, the state quarterfinal victory was their fifth in three sets after losing the first.

“When we’re down, neither of us give up really that easily,” Schrader says. “I was never stressed out if I missed a ball or anything. I knew (McGuigan) would care, but he wouldn’t get mad. Also, I learned that teamwork is very important for a high school team. When they’re there, it makes a big difference.”

Patrick McGuigan took sixth at state in singles and Evans and Piscopo were top 16. Benet’s highest one-class team finish under Hand had been seventh in 2005.

The final ingredient for success? Cheese.

It started as a joke, but the word became the focal point of cheers, even during state. The atmosphere was nothing like McGuigan remembered from watching Patrick.

“The first match it was like, ‘Get cheesed,’ or ‘Shred cheese,’ I guess the other team being the cheese,” Schrader said. “(Teammates) would say,
‘Cheese. Cheese it up,’ or something like that.”