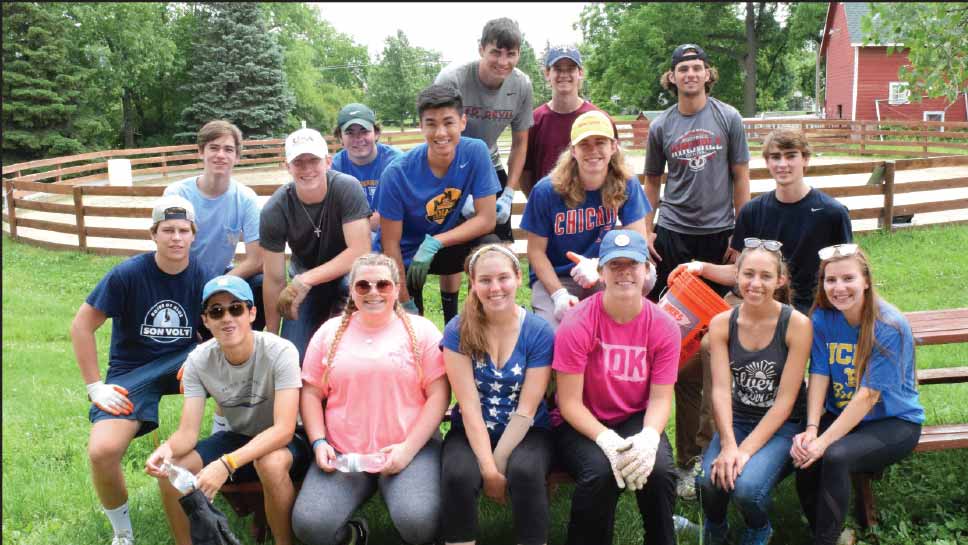 The 2017 Hinsdale Assembly debutantes and honor guard demonstrated just that earlier this summer, donning work gloves for one of the group’s service projects this year. The group of young people donated their morning to the Hanson Center, home to one of the Ray Graham Association’s four community learning centers for adults with disabilities. The center also houses programs for children and adults with and without disabilities.

When the group arrived at the 12-acre facility—which includes Mize Hall, an indoor riding arena and stable, horse pastures, a small animal farm, the Funk Memorial Garden, and an 11,000-square-foot Boundless Playground— it was clear they had their work cut out for them. However, for the debutantes and honor guard, this volunteer assignment was not daunting.

To 2017 Hinsdale Assembly debutante Ellie Guido, the pairing between service work and becoming a debutante is a logical one.

“I think service is a part of the debutante experience because the Hinsdale Assembly is teaching us how to be adults and part of a community, and a large part of living in a community is knowing what needs and problems there are and how you can help be a part of the solution,” Guido explains. “They have helped demonstrate to us that getting involved in service isn’t hard and it’s very easy to find ways to give back to your community.”

Honor guard Jimmy McKay found a similar connection. McKay says that at first he wasn’t very excited about becoming a member of the honor guard.

“My initial reaction was that it was just about teaching me manners, how to dance with gloves, and wear a tux,” McKay says. Ultimately, he’s found his commitment to mean much more than that. “I think honor guard incorporates service in part because ‘to whom much is given, much is required,’ but it’s also about seeing the world through someone else’s eyes. Service work helps us understand each other and respect each other better.” 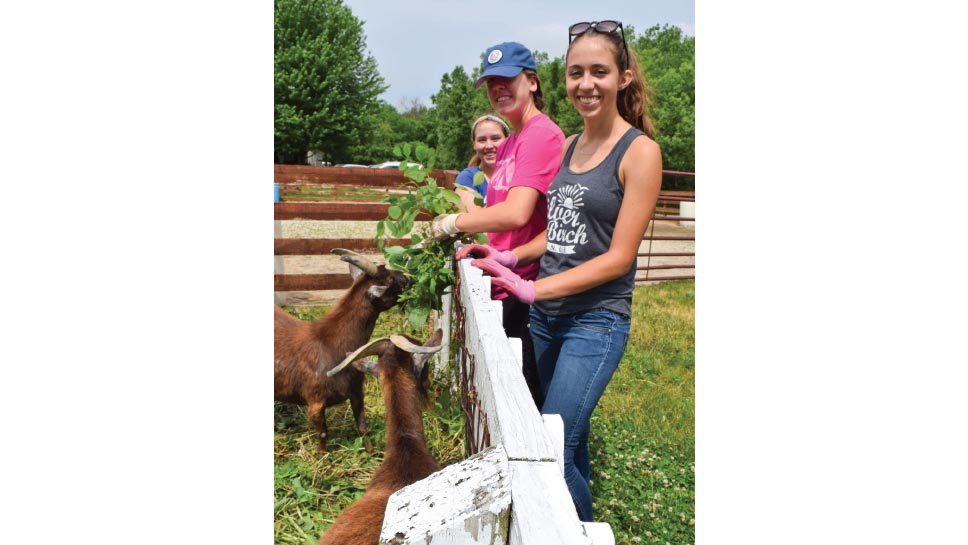 Hinsdale Assembly debutantes clean up some of the animal areas at The Hanson Center. Shown here are Ellie Guido, Riley Burr, and Shannon Garvin.

By weeding the outdoor area and staining the fences at the Hanson Center that morning, Guido, McKay, and the rest of the Hinsdale Assembly found these sentiments to hold true.

“We all had a really good time volunteering together, and it felt good to know that our work there was really appreciated,” says Guido of her time at the Hanson Center. “The Hanson Center doesn’t have a large staff so if we didn’t volunteer, no one would have been there to do the job. The staff was very appreciative and great to work with.”

With two cousins in the family who have severe disabilities, McKay found the work to be particularly rewarding.

“It was motivating to see my friends and classmates come together and work hard for a good cause,” says McKay. “I thought a lot about how my cousins, Kaitlin and Charlie, would enjoy programs like those offered at the Hanson Center if they lived here.”

The great work completed by the Hinsdale Assembly at the Hanson Center was only a fraction of all that the group has given back to the community. After announcing a 10-year, $1 million commitment to the AMITA Health Cancer Institute in 2013, the Assembly Board had reached 85 percent of the goal as of year-end 2016.

As Guido and McKay leave Hinsdale for college, they plan to uphold the values instilled in them by their experience as part of the Hinsdale Assembly. Inspired by her work with the assembly, Guido will live in a Leadership Experience through Academic Development and Service community at the University of Illinois in the fall.

“When we live on our own and join our own communities, we won’t have people there to make us volunteer,” explains Guido. “It will be up to us to find ways to get involved, and so far we’ve all seen that getting involved in service is a great feeling and can be a fun time.”

To learn more about the Hanson Center, visit ray-graham.org. For more information about the Hinsdale Hospital Foundation, call 630-856-2000.