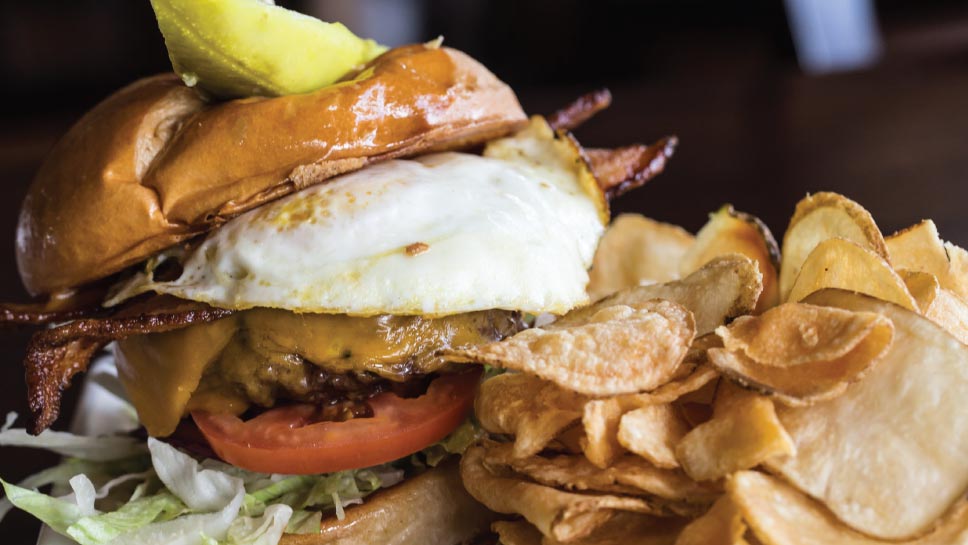 An affordable family night out and a year-round touch of the Irish is served up fresh daily at Fox’s in Hinsdale. PHOTOGRAPHY BY ROBIN SUBAR

Tucked into the Gateway Square shopping center, Fox’s in Hinsdale announces its Irish heritage loud and proud. From the four-leaf clover marked bowler hat tipped over the name Fox’s on their window, written in a Celtic-inspired font, to the Irish nods on the menu, their Irish pride is a large part of their charm.

The other side of the coin is their versatility, because Fox’s menu is also largely Italian. Tom Fox Sr.’s first brush with the restaurant biz came as a pizza delivery boy—pizzas make up a quarter of Fox’s current menu—and the first Fox’s location in Chicago was previously an establishment owned by Mafalda Capone Maritote, Al Capone’s sister.

As soon as we checked in for our reservation, we were guided upstairs to the dining room. A wall of windows on the south wall shows their large balcony patio, the perfect environment for exploring their selection of local draughts on a sunny summer day. We were seated in the dining room next to a wall of blown up prints of Ireland and of adorable fox pictures–the animal, not the owners. Old black and white prints of Hinsdale from a century ago are also on display throughout the space courtesy of the Hinsdale Historical Society.

Our first foray into the appetizers showed us the delicious simplicity with which Fox’s approaches some of their family-friendly comfort foods. The Cheesy Garlic Bread with added tomato is a halved baguette covered with a house-made Italian dressing topped with a slice of fresh tomato and a nice slab of mozzarella cheese. The crunch of the bread against the thick melted cheese and the brightness of the tomato leading into a lingering garlic aftertaste is every reason we love Italian food in a single bite. 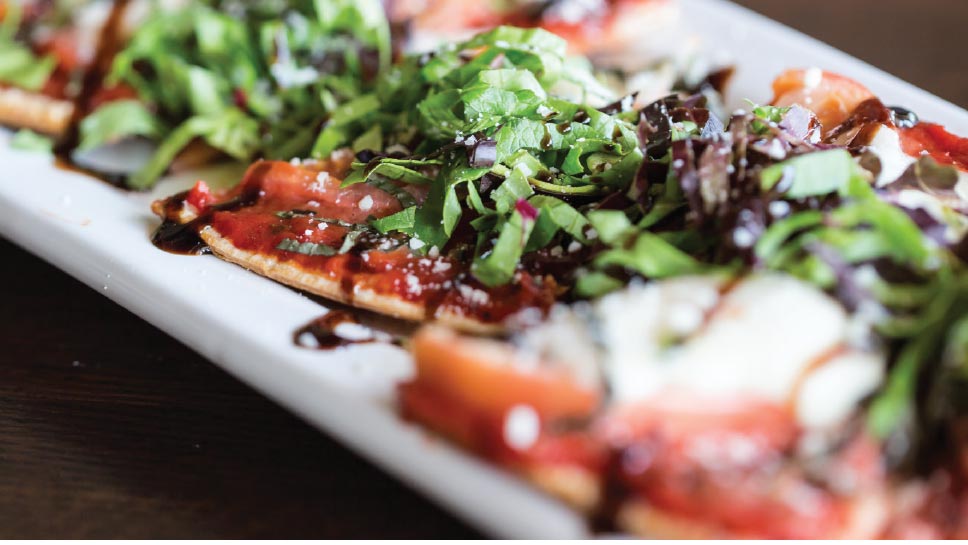 Asking after their most popular appetizer, we soon had a heaping plate of Fried Zucchini topped with a sprinkling of Parmesan cheese. The frying process keeps the thick slices of zucchini extremely juicy. When dipped in either the green ranch (for Irish reasons) or the warm marinara sauce, these are a more succulent version of fried mozzarella sticks. And since zucchini is a vegetable, it must be healthy, too.

Every week, Chef Jaime likes to stretch his culinary legs with the specials menu, and there was a Mexican food bent during the week of our visit. This materialized during the appetizers in the form of a Shrimp & Fish Ceviche special. Massive house-made tortilla chips are piled high with chopped onion, jalapeno, cilantro, and cod cooked in citrus vodka and chilled before getting topped with a whole grilled shrimp and a sliver of avocado. Everything about the dish was fresh and bright, with a citrus tang and a great mix of Mexican flavors, accompanied by a very spicy cocktail sauce that adds a great amount of heat but overpowers the really well executed flavor combinations.

One of the most popular entrees on the menu is neither Irish or Italian, Fox’s Famous Chicken, four pieces of fried chicken and two sides. The flavors hearken back to classic Southern cooking with a thick crunchy exterior encasing juicy dark and white meat chicken. The Mashed Potatoes and Mac N Cheese are similarly down-home style: the potatoes are rich and buttery with little strips of potato skin throughout and the mac and cheese relies on thick noodles and a mixture of cheeses sitting in a thick, creamy bechamel base.

With Fox’s frequent nods to its Irish pub roots, we had to try the Irish Reuben sandwich from the Between the Bread section of the menu. The sandwich is massive. It arrives open-faced, a mound of hot corned beef, sliced thick and layered, surrounded by a smattering of corned beef brining seeds and spices, covered in sauerkraut and a layer of melted Swiss cheese. This is full meal with or without the slices of marbled rye, but we slathered the top slice with zesty Russian dressing, cut it down the middle, and took a big bite (with a sandwich this size, that’s the only kind of bite). It delivers a full-on corned beef savor buoyed by the grain of the bread, the vinegar bite of the sauerkraut, and creaminess of the dressing. For a tapas version of their corned beef, try the Reuben Egg Rolls. It’s the same ingredients rolled up in delicious, fried wonton wraps with a horseradish-heavy Russian dressing dipping sauce.

When it came time to order the pizza, we took the tone of the room. We saw Fox’s Special—sausage, mushroom, green pepper, and onion—at several tables. A few of the kids were going for the Taco Pizza—seasoned beef, shredded lettuce, tomato, and sour cream. But we opted for the Bruschetta pizza. Fox’s crust is classic pub pizza, cracker thin and crispy. It’s a nice consistency for the chopped tomatoes, garlic, and fresh basil which are covered with mozzarella, parmesan, olive oil, and a dark drizzle of balsamic reduction traced in a spiral to the center. Between the crisp, buttery crust and the bright, fresh ingredients, this covers the richness bases of both the eponymous Italian antipasto and a family-night pizza.

For dessert, we had the Chocolate Chip Cookie a la mode. This is a huge cookie taking up the bottom of a piping hot ramekin straight from the oven. It’s so soft it’s practically oven warmed cookie dough, topped with a scoop of rapidly melting vanilla ice cream drizzled with chocolate and caramel sauces. Incredibly decadent and delicious.