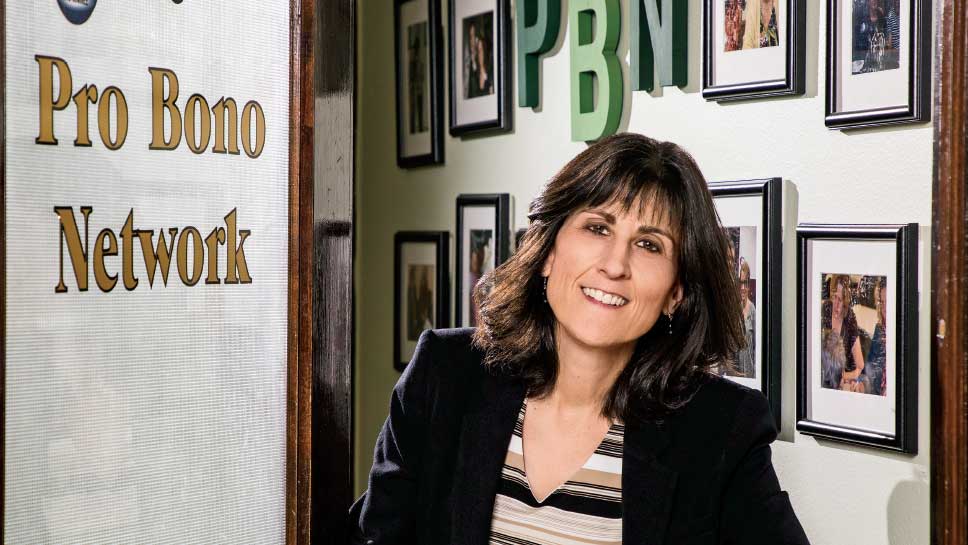 Pro Bono Network welcomes Hinsdale resident Linda Rio Reichmann as the new executive director. The network is looking to expand its volunteerism and programs to include DuPage County as well. PHOTOGRAPHY BY JOEL LERNER

Michael Nicoll Yahgulanaas children’s book The Little Hummingbird is based on a South American indigenous story of a brave hummingbird who attempts to save the forest from a fire. When all the other large animals run away from the fire, the little hummingbird flies to a stream and transports drops of water in its beak back to the fire in an attempt to extinguish the flames. When a big bear finally asks what she’s doing, the hummingbird replies, “I’m doing everything I can.”

And so, it is aptly named that one of the awards given to lawyer volunteers at Pro Bono Network is called The Hummingbird Award—given to the lawyer who is doing the best he or she can to create sizable change through individual, yet significant efforts.

Pro Bono Network, or as Forbes Magazine recently called it “The Uber of Legal Aid,” began as a simple volunteer idea from a group of stay-at-home moms who were, at one time, working lawyers. These women were looking for a way to give back to the community without having to hire babysitters, travel far, or restrict their obligations to their homes. Yet, few organizations existed that could support that desire until PBN took shape.

Today, PBN partners with numerous legal aid agencies in Chicago who agree to work within the boundaries of parenthood because Pro Bono Network caters to two groups—first, the stay at home parent or similarly situated lawyer, and secondly, low income individuals who cannot afford to hire lawyers. Since its inception in 2011, PBN has had more than 250 attorneys and 20 translator volunteers who have worked pro bono for more than 12,000 hours.

Recently, PBN hired Hinsdale resident Linda Rio Reichmann as its new executive director. Rio Reichmann, a mother of three and a one-time private practice lawyer, comes to the agency highly lauded by lawyers across Chicagoland in part because of her extensive pro bono experience.

“At one point I asked myself, ‘What’s my purpose in life?’ and I decided that it’s to be of service to people, to help them do what they can’t, at that moment, do for themselves,” says Rio Reichmann.

In her heart, Rio Reichmann always knew she’d work in public service, even when she worked in private practice.

“The law firm I worked for was very supportive of my pro bono work and I just knew that I wanted to work with the people who weren’t going to get that service otherwise,” she says. “So PBN is a great fit for me because I can expand what I’ve been doing plus help stay-at-home and other similarly situated attorneys who want to do something to give back.”

After leaving the private firm, Rio Reichmann’s career focused on legal services and helping lawyers do pro bono work. About nine years ago, she left her staff job at the American Bar Association to care for her children and elderly family members.

“It was a series of events that kept me home longer than I planned,” explains Rio Reichmann. Also during that time, she served on the board of Hinsdale School District 181, including as president, and took on a leadership role at the Unitarian Church of Hinsdale. “It was hard for me to continue the legal pro bono work I was doing, so the mission of PBN is close to my heart and a brilliant idea. Once my life settled down enough and I was ready to go back to work, PBN was the perfect fit.”

That work was needed more than ever. Less than one in six low income populations are getting the legal services they need.

“The numbers are really staggering,” says Rio Reichmann. And it’s getting worse. The government funding is drying up so staffing is diminishing at the legal agencies as well.

As the new executive director, Rio Reichmann is looking to expand PBN to include more volunteers and programs in DuPage County.

“Our model is even more important now,” she says. “There are attorneys out there who have the capacity to do this work so we want to tap into that. The volunteer ‘people resource’ is kind of the last thing left that still has expanding capacity.”

Aside from attracting more volunteers, PBN hopes to seek out additional grant sources and other financial support. “For example, our seniors projects have a lot of entities that we aren’t tapping into that support seniors,” says Rio Reichmann. “I also want to look at technology grants because as we expand, our technology needs are larger.”

“There’s a triangulation with Pro Bono Network,” says Hinsdalean Julie Renehan, a member of the board of directors for PBN and on the board’s marketing committee. “PBN benefits lawyer volunteers, it benefits the legal agencies, and it obviously helps the clients.”

The volunteers include stay-at-home moms, but there are retired lawyers, solo practitioners, and inactive lawyers who volunteer for PBN as well. PBN gives access to training for its volunteers as well.

“It’s nice that there is a continuum of projects,” says Renehan, whose children were grown by the time she joined PBN. “For some volunteers, working out of the home is perfect, but I was drawn to going into court and putting on a suit again.”

Renehan also worked on the Incarcerated Mother’s Project which she found equally exciting. “Being able to immerse yourself in a whole different world is eye-opening,” she says.

Even though some volunteers worked in specialized capacities prior to joining PBN, lawyers can choose to help in any of the offered programs.

“There is an online training library which is very convenient,” says Rio Reichmann. “An added bonus for our volunteers is if they choose to go back into the workforce, they are able to keep up their skills through PBN.”

In all, the long-term effects of the hardworking volunteers will be felt for years to come.

“My daughter has no memory of me working outside the home when she was little, but now she’s very aware of what I do. I like that she, and my two sons, see me doing this,” says Rio Reichmann. “I think a lot of our volunteers feel the same way. They are showing their children what they do through PBN and that’s very important.”