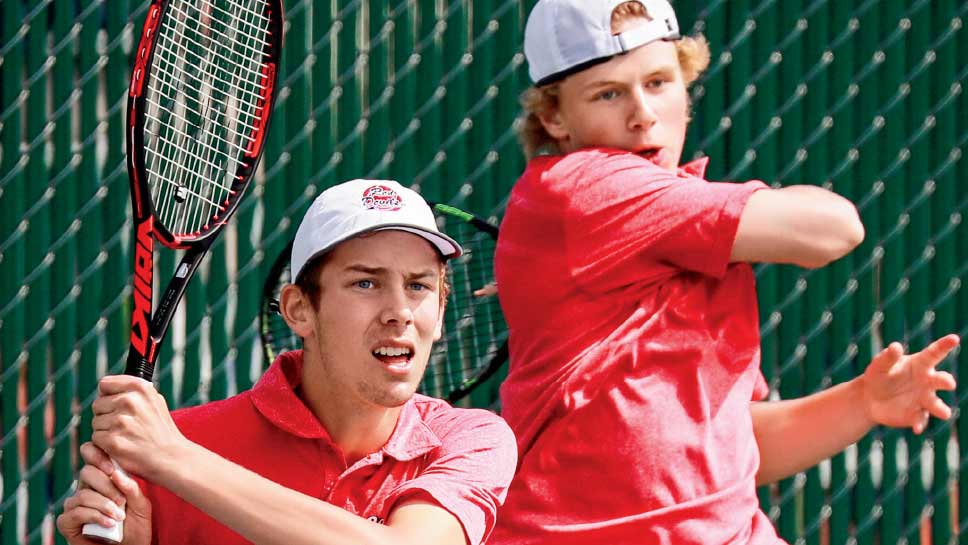 Hinsdale Central junior Trevor Hamilton hoped to make his first trip to the boys’ tennis state meet in 2016 as a singles player. During the final regular-season match the week of sectionals, Hamilton slightly injured his right ankle—or so he thought. Hamilton continued playing and lost in three sets with a fractured fibula.

“I thought it was a normal rolled ankle, did it a million times in tennis and basketball,” Hamilton says. “I woke up in the middle of the night. I couldn’t step on it and fell. I tried playing on it later in the week and figured playing (sectionals) hurt wasn’t as good as the next guy playing healthy.”

Junior Andrew Buhelos became the sectional singles replacement. He lost the state-qualifying match in three sets. This season, Hamilton and Buhelos were doubles partners and made their state debuts memorable. They finished second and helped the Red Devils take third in Class 2A, the sport’s first year of a two-class format.

It was quite a reunion after winning a Hinsdale Little League baseball championship as 8-year-old teammates.

“We were really excited. Of course, we wanted to win but overall we’re happy and proud of how we did,” Buhelos says. “I actually don’t see (Hamilton) much at school. We just played a lot of tennis and spent a lot of time together. We got to know each other a little bit more.”

Both finalists needed three sets for their quarterfinal victories. In their previous two varsity seasons, Buhelos and Hamilton recall only a handful of doubles matches together.

“We’re always looking for chemistry and when we put those two together, it just clicked,” Hinsdale Central coach John Naisbitt says. “Immediately they had some good wins. It’s nice when you have one player who is really comfortable at the net and one player who is willing to hit blasters from the baseline or is capable of sustaining rallies.”

“I liked the individuality of tennis,” Buhelos explains. “Doubles is kind of fun because I don’t get to play it a lot.”

Hamilton is slightly shorter but the basketball player of the pair. He started for the Red Devils and it’s his primary sport. Hamilton admittedly doesn’t think about tennis too much until tryouts come around.

“It usually takes about a week or so to get my strokes back, my serve. It’s not too difficult,” Hamilton says.

Once in tennis mode, Hamilton brings consistently strong net play. Buhelos often supplies vicious ground strokes and passing shots but also likes approaching the net, where he, too, can be heroic.

“They were calling me Spider-Man because I closed the middle really fast. I guess I moved around the court pretty well,” Buhelos says.

“I think just our overall athleticism is really tough to match up against,” Hamilton adds. “We’re able to get to balls better, get shots that other people can’t hit.”

Hamilton also brings big-game experience from his basketball success. This season, the Red Devils nearly captured their third regional title in four seasons. Although Buhelos is used to playing several matches a day, he became stressed when state crowds swelled as they continued winning.

“Since (Hamilton) plays basketball in front of a whole gym, he’s used to it, but at first I was kind of surprised,” Buhelos says. “He’s really calm on the court. He handles pressure really well.”

Chase Hamilton, Trevor’s brother who just finished his junior year at Iowa, was there to watch. Chase was twice all-state in doubles, including second as a senior. Their final days at state concluded with eating at Jimmy John’s with assistant coach Ian Tesmond, a two-time state doubles champion for Hinsdale Central in 2009-10.

“In basketball, you’re always talking to your teammates. We really communicate well,” Hamilton says. “He’s definitely a little more laid back. I think Andrew is one of my close friends now. I’ve gotten to know him a lot better inside tennis and outside.”

With their three other state qualifiers also returning, next year’s Red Devils should contend for their first team state title since four straight from 2012-15.

“At state we sort of talked a little bit, ‘Hey, we could definitely do this again,’,” Buhelos says, “but we were also enjoying the moment.”