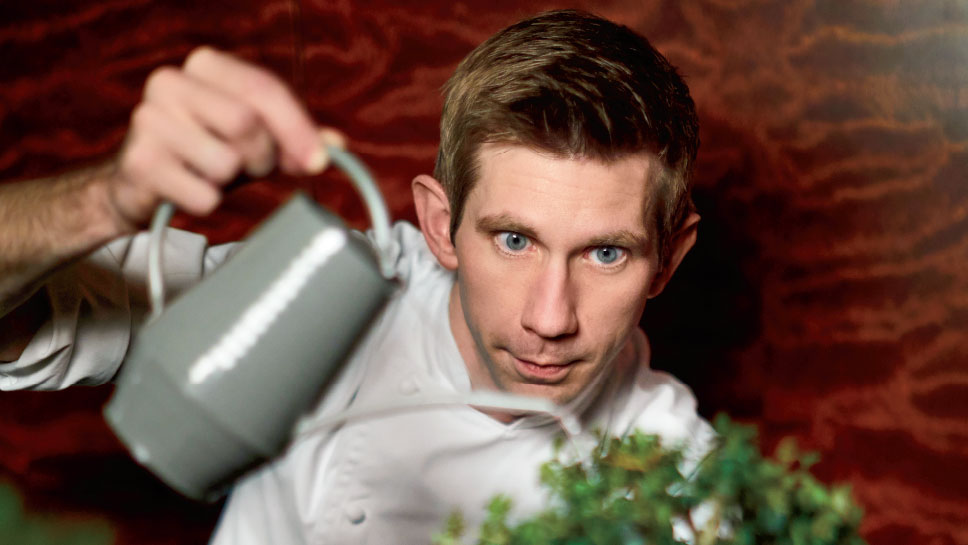 Having cooked for Madonna in France, acted as the right-hand for some of the best chefs in United States, Hinsdale native Nick Dostal steps into the spotlight as the next executive chef at Sixteen in the Trump International Hotel & Tower Chicago with a “green” menu like no other. PHOTOGRAPHY BY NEIL BURGER AND ISABELLI MEDIA RELATIONS

Nick Dostal has a thing for English peas in the springtime. If you make a reservation to sample his inaugural offerings as executive chef of Sixteen, the swanky restaurant in the Trump International Hotel & Tower, you’ll be sure to find green peas, in multiple forms, slipped into the folds of his elaborately plated tasting menus.

Dostal loves those round little guys. Plump. Crisp. Garden sweet. When it comes to peas, he considers everything edible— from the richness that can be extracted from their purse-like shells to the more wispily flavored pea tendrils that sprout up from the dirt like delicate strands of green Christmas ribbon.

Recently, he’s been showcasing their versatility by sending out a wooden gardening caddy filled with what he calls his “spring snacks.” Sitting atop a craggy jumble of garden scraps and tree bark—made to look like the top layer of soil in your garden back home—sits two delicious bites.

The first is a crescent-shaped English-pea chip topped mint blooms that has the crunch of prawn chip and the flavor of split-pea soup. Next to it sits a Thumbelina-sized flowering pot blooming green with a cluster of pea tendrils wrapped in lardo and bundled with manchego and ricotta dipped in a pickled ramp vinaigrette. Pungently vegetal with a bold shot of whey underneath, it tastes like a Spanish-style riff on radishes and butter.

For years now, Dostal has been waiting patiently to build a grand tasting menu out of dishes just like this. Since 2015, he’s been in the kitchen at Sixteen, as chef de cuisine. But when his mentor, Thomas Lents, abdicated his position as executive chef in January to head to Detroit, it was Dostal who graduated into the top spot. 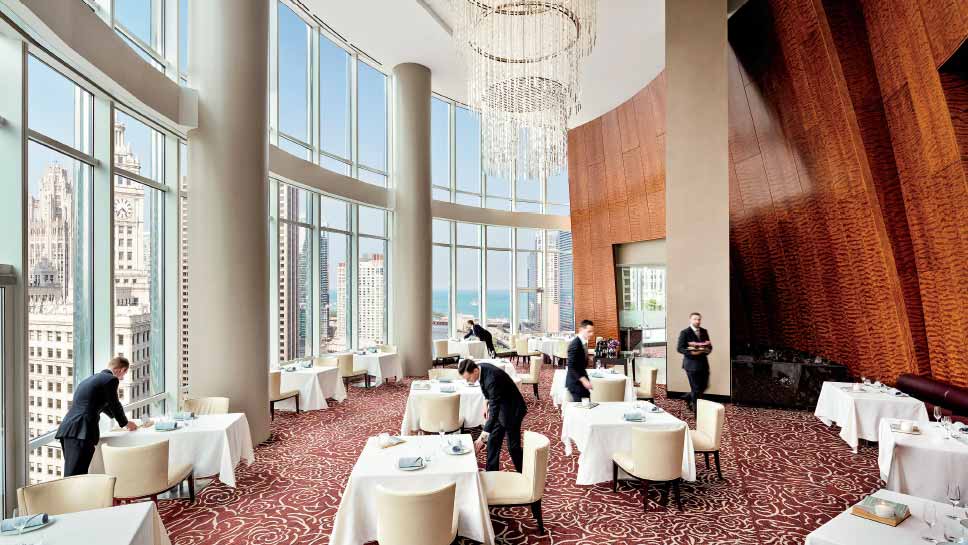 The restaurant’s eight- and 14-course tasting menus are now completely under his control—menus that will be built around his own rather unique “sprout to root” philosophies. It’s not a vegetarian’menu. You are likely to find a parade of exquisite meat and seafood options throughout—whether it’s slices of mustard-slathered Provitello veal with pickled pistachios or fork-tender Chinook salmon under a lemon sabayon—but it’s the way that those proteins are swathed, accented and in some cases bathed in vegetal flavors that make his cooking so unique.

If snout-to-tail cooking demands that no part of an animal go to waste, Dostal seems committed to showing a similar respect for produce, utilizing the entire architecture of his greens.

“I get inspired by just going out into the world, and seeing how nature literally incorporates itself into the food,” he says. “If you go out and break a stalk of fennel, for example, and look inside, you can see its inner biology. I’m constantly trying to figure out how to take that beauty—and those flavors—and extend their life so they get to the diner.”

Anyone who was close to Dostal, back when he was growing up on a leafy cul-de-sac in Hinsdale, could have seen this coming. When he was 6 years old, his family moved here from Ohio, bringing clippings from the family’s raspberry bushes with them. Young Nick was fascinated by the miraculous growth of those bushes and the way his family transformed a small patch of nondescript backyard dirt into a colorful cornucopia of fruits, vegetables and culinary herbs.

Whenever his mother announced she was going to make iced tea, he would sprint out the back door, carefully pluck a couple mint leaves from their garden, race back into the house, and drop them into mom’s pitcher. He’d watch, doe-eyed, as they swirled and curled and infused their flavor into the honey-brown depth of the tea itself. 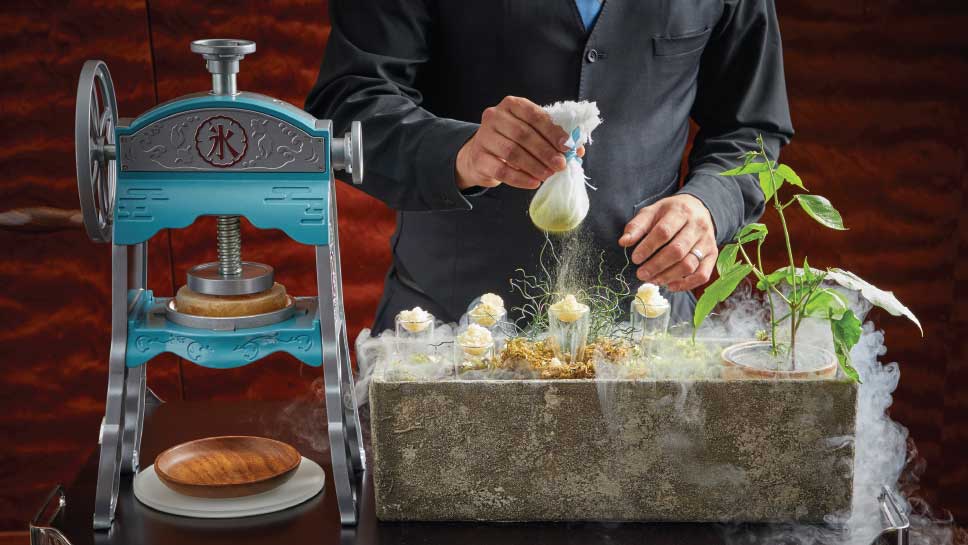 Young Nick had, in some ways, unconventional tastes. When Dostal’s father would return from his business trips to Japan, he knew to bring back exotic bottles of soy sauces and sake for his son. They’d be used to create elaborate “Benihana food nights” at home. Nick would pick veggies from the garden, his family would fry, soy and sauce them up, add some shrimp and then try to carefully flip them, Cirque du Soleil style, onto a kitchen counter full of waiting plates.

Years later, when Nick was 15, his mom decided to sign up him up for a summer cooking class. After just a few classes, young Nick knew what he wanted to do for the rest of his life. Two years later, he got a job as a dishwasher at Redstone American Grill—then the hottest thing on the Oak Brook dining scene—and promptly rose up the ranks to line cook in a single summer.

From there, Dostal traveled the world, intent on learning as much as he could about native ingredients and regional cooking techniques. After attending culinary school in Denver, he worked in ritzy restaurants across Vail, falling in love with lamb and obsessing over proper butchering techniques.

Next came a sojourn to France, where he worked for free in various kitchens, intent on learning Old World cooking tricks. In time, he’d even work on menus at various Cannes Film Festival parties, including an AMFAR event where he had to create and execute a menu for none other than Madonna—complex dietary restrictions and all.

Then came a stop in San Francisco. While there, he worked with Michael Tusk at Quince, where he was amazed by quality of the produce that local farmers marched through the backdoor. While there, he learned how to make pastas from Tusk, then headed back to Chicago to work at Ria in the Elysian Hotel, now the Waldorf Astoria.

He joined the renowned ranks of Curtis Duffy’s game-changer of a restaurant, Grace, in 2012, where he stayed for three years, until heading to Sixteen.
And now, at long last, comes his chance to cultivate all these ideas of his about ingredient-driven cooking into his tasting menus. His first move toward meeting that goal? Rethinking and expanding the hotel’s outdoor terrace garden.

What had been a small novelty garden will be transformed this summer into his own personal spice rack in the sky. Think hyssop. Lots of hyssop Orange hyssop. Anise hyssop. And Bubblegum hyssop, which tastes exactly as you expect it might: like a green stalk of Bubble-Yum chewing gum.

There will also be plenty of mint—eight different varieties of mints, from banana mint to chocolate mint—plus arugula, basils, chamomile and fennel.

But his terrace garden will not yield enough to deliver what Dostal needs to build his menu. So he went home, back to the Hinsdale area and started working with a forager and herb specialist. His name, Dostal says, is not important. But what he’s been able to pull from the earth—what Dostal calls the area’s “secret gardens”—certainly is. Think wild fennel. Garlicky ramps. And exotic bouquets of wild Midwestern herbs.

Imagine pickled strands of semi-sweet rhubarb. Jiggly gels made out of chamomile topped with a brush of mirin and soy sauce. And gentle teas curated from the shells, stems and trimmings of English and snap peas, which are frozen into ice blocks and made into sweet-pea-flavored snow cones dusted with mint and powdered sugar.

“I want the menu to be as ingredient driven as possible,” says Dostal. “It’s not going to change every quarter or at set times but slowly travel through the seasons. It will be balanced, but I want surprises to pop up throughout the entire meal. ”

Who knows what surprises are to come? Dostal has already begun folding tiny bits of strawberries into a lamb tartare topped with fava flowers and pea shots. And he’s committed to creating artisanal pastas. Think tender triangle-shaped stuffed pasta sheets, stuffed with morels mushrooms, and topped with a green-garlic pistou and a beurre monte. The result? A lavishly rich delight bursting with notes of garlic and umami flvoars.

He says the possibilities are limitless, but you can bet that one particularly precious ingredient will make its debut somewhere along the line.

“You know that raspberry tree we had in our backyard? My dad has transplanted little parts of this plant his entire life,” Dostal says. “It’s actually lived with my father his entire life. Some day I will take a little bit of that plant with me, too—and see what I can do.”