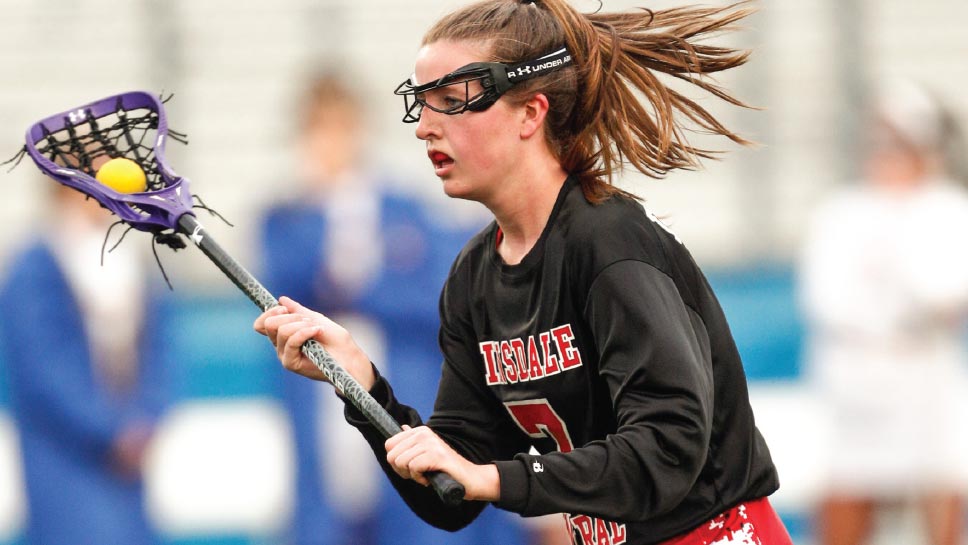 After the Red Devils’ home match with Rockford High School in Michigan, they met the VanderMolen sisters—who also happened to be a senior, sophomore, and freshman.

“I found out at the dinner we had afterwards for them. We were just talking with the other team and the three sisters came up,” says Shea, now a junior. “I thought it was incredible and so coincidental. It was really fun for both teams to connect and laugh over that.”

Thanks to lacrosse, the bond among the Draddy sisters is a stronger one. They’ve supported, motivated, and brought out the best in each other—even while Megan has put down her stick at least for now during her freshman year at the University of Colorado.

For Shea, being named to the 2016 Illinois High School Women’s Lacrosse Association All-State Team was a shared accomplishment. The Red Devils finished third in the state.

“Whenever Megan or Sara scored a goal, I’d get so excited for them. I felt like we all scored a goal,” Shea says. “All of my lacrosse career, I looked up to Megan. I wanted her shot. I wanted to run as fast as her. She helped to boost my confidence. Playing with her all of the time made me a better player.”

East Coast lacrosse influences come from parents Jim and Susan, who played women’s lacrosse at James Madison University in Harrisonburg, Virginia. Both grew up in the New York City area. They lived in Kensington, Maryland, before moving to the area 13 years ago.

Jim is 6’2” and Shea and Megan are 5’8”. Like Susan, sophomore Sara is about 5’3” and relies more on quickness. Each began playing in youth leagues around second or third grade. Because of varying age groups, the trio never were on the same team until 2016.

That regular season, Sara remembered playing eventual state champion Loyola Academy in a freezing, pouring rain. Her sisters made lacrosse look “so easy and so fun,” despite the conditions.

“They’re part of the reason I played lacrosse. I got really into it because I knew they loved it so much,” Sara says. “I wouldn’t trade them for anyone else in the world as sisters. Not a lot of sisters can have that tie. Last season was a special time and I miss that. I wish I could go back.”

In 2015, Shea was one of few freshmen selected to the U.S. Lacrosse Illinois/Wisconsin National Team for a tournament showcasing non-senior college prospects. Megan was a repeat team selection.

That also was the first season Shea and Megan were teammates for the Red Devils.

“It was cool playing with her, fighting for the draw, and taking it on the attack,” Megan says. “It definitely means the world to me. I’m the oldest. I never really had anyone to look to and I’m glad to be there to provide that role. I’m really lucky to have them and glad they’re happy to have me.”

Shea played forward as a freshman. By 2016, Shea and Megan proved to be quite a combo as midfielders, taking full advantage of their stick handling, running speed, and endurance. Sara also was a freshman forward but this season moved to defense—spot starting depending on matchups. Freshman brother Jimmy tried lacrosse but currently is focused on basketball.

“I like lacrosse because it’s a fast-paced game,” Shea says. “You do a lot of running. It’s a lot of stick skills and strategy. You’re constantly moving. I like that. And it’s fun to meet new people.”

With Megan away, this season was a different dynamic.

Shea assumed the roles of oldest sister and prominent team contributor, even as a junior. The only varsity seniors were Stanford recruit Anna Santulli and Brooke Secola.

“I’m more of a presence on attack. The graduated seniors were really good so I knew it was going to be difficult to fill their shoes,” Shea says.

“I’ve learned to be more of a leader, take charge, and be more of a vocal presence on and off the field. I’ve learned so much from my sisters about being a good teammate, working hard, all coming together as a team.”

Shea remains undecided about playing collegiately. As her sisters agreed, the next chapter can’t replicate the same feelings.

“After games we’d kind of talk at home about what happened, what was good, what was bad. After practice, our mom asks how it’s going,” Shea adds. “I can see why it would be hard for other sisters, but I can’t really imagine playing without them. It’s one of the best parts of lacrosse.”