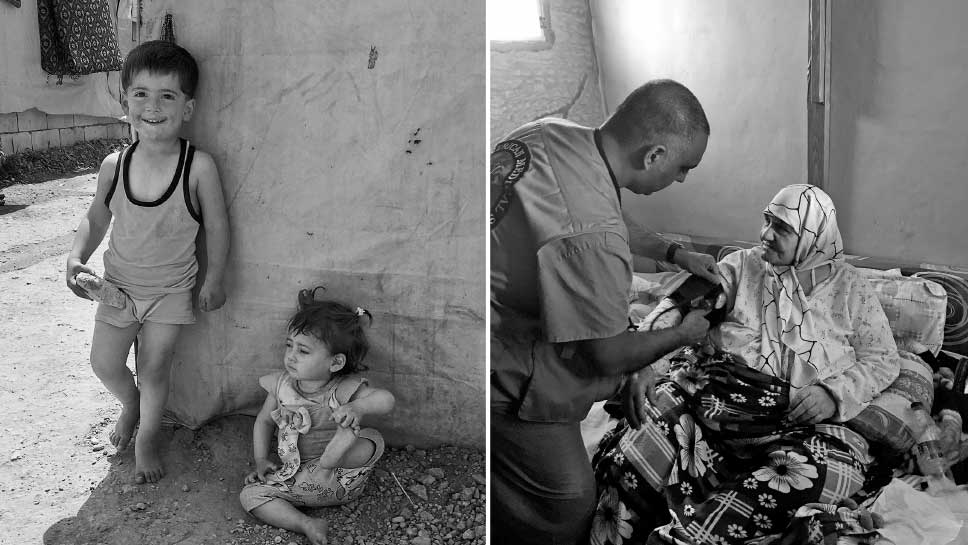 Oak Brook resident Dr. Moeen Saleem enlists his teen son Safwan to join him on a medical mission to aid Syrian refugees in Lebanon. PHOTOGRAPHY PROVIDED BY THE SALEEM FAMILY

In the ultimate act of service and father-son bonding, Dr. Moeen Saleem and his son Safwan recently traveled to Lebanon on a medical mission trip to aid Syrian refugees in crisis. These two men left Oak Brook in April as father and son, but they returned to the United States as so much more.

“I thought this would be a good opportunity for Safwan to see what’s happening in the world,” says Saleem, a cardiologist who practices throughout the western suburbs. “All of us living here in the United States won the lottery in terms of where we were born and I wanted him to see people who are less fortunate. I wanted Safwan to realize that he has opportunity and resources in his life that he can use to change others.”

As a six-year civil war ravages Syria, the worst humanitarian crisis since World War II is happening in the Middle East. It was Saleem’s hope that this trip would help Safwan appreciate all that he has in the United States and that he will continue to help others in the future.

This is the second medical mission for Saleem and the first for his son Safwan, a junior at Hinsdale Central High School. Both missions were coordinated and executed through The Syrian American Medical Society (SAMS). 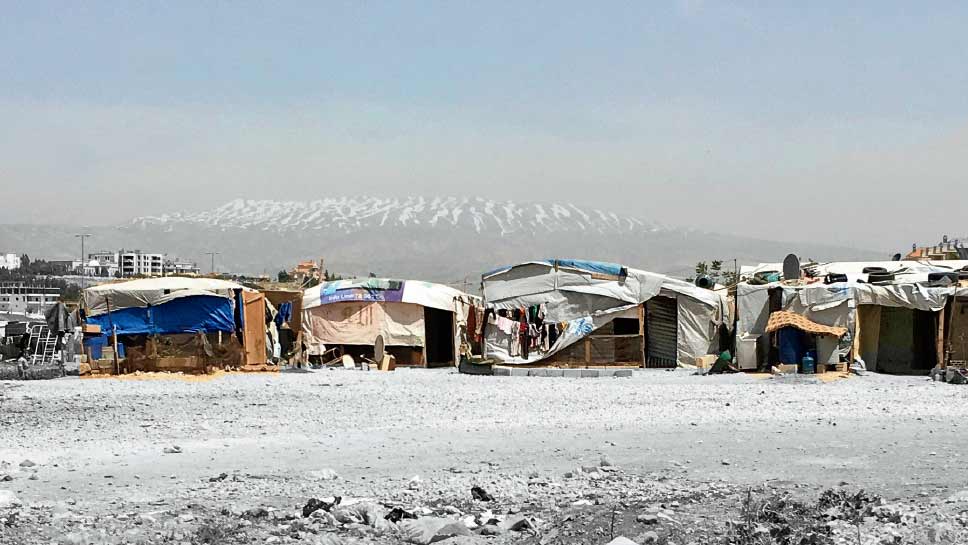 SAMS is a nonprofit, nonpolitical, and nonreligious medical organization that works to aid refugees in Syria and neighboring countries. To date, the organization has helped more than 3 million refugees have access to medical care.

“Ten million people have been displaced in Syria and close to 5 million have become refugees. People risk their lives to escape danger only to arrive in conditions where they are stripped of their dignity and have minimal resources for basic health, education, and employment,” says Saleem. “The mission team is made up of people from all over the world, from different backgrounds and religions, so it’s a nice representation of people wanting to help humanity. That’s what led me to take my first trip to Jordan.”

The organization raises funds through grants and crowd-funding. Physicians themselves also have personal links so people can donate to fund their mission.

“Doctors put up a SAMS link on social media and we ended up with approximately $40,000 for our mission,” says Saleem.

The medical team was scheduled to work in one of three places—Beirut, the Beqaa Valley, or Tripoli. On the first day, Safwan was scheduled to visit refugee camps while his father worked in the clinics an hour apart.

“When we got the Beqaa Valley, the medical director had scheduled me to stay in one area and Safwan in another,” says Saleem, who noted that the Syrian border was less than two kilometers away from their clinics. But because he implicitly trusted the other doctors on the mission, he put his son in their care.

“When Safwan returned later that day, he told me he wanted to go to the camps every day because he had so much fun, especially interacting with the kids,” he adds. 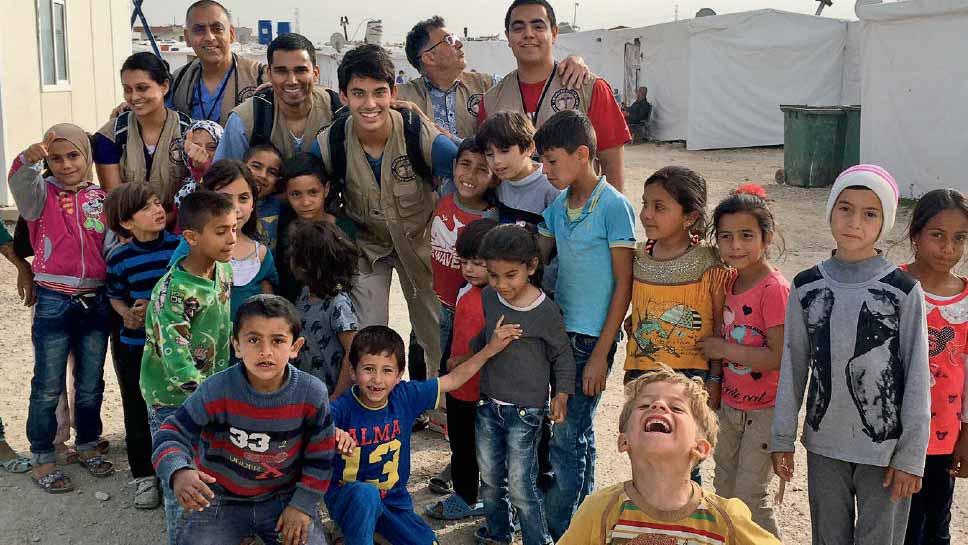 Safwan enjoyed playing with kids in the camps

Although Safwan was excited about a mission trip with his father, he didn’t think his presence would be as impactful as it was.

“I didn’t expect I’d be playing a big role in the mission because I’m not a doctor,” says Safwan. “But when I got there I was in charge of sorting large amounts of medications that was delivered in boxes.”

The teen used his phone to keep inventory of the boxes and fill doctor’s medication requests and orders—a position vital to running an organized and successful clinic given the large number of patients seen each day. Safwan also initiated tours of the camp to meet and play with the children.

Saleem says he had many “proud father” moments when the other doctors would compliment Safwan on how much he helped them during the day.

For Safwan, the feeling of pride is mutual. “I always admired my father for what he does here as a cardiologist because I know he saves lives and it’s a big deal,” he says. “But watching him do his thing in person, interact with patients and make them laugh, was really cool to see.”

After the eight-hour day was finished, Safwan played soccer with the kids in the camps or purchased candies for the kids with extra money he had while Saleem visited the nearby refugee tents.

“One day we were playing soccer and the ball was full of holes,” said Safwan, “so I took the translator with me to the store and bought some soccer balls for the kids. The balls were so cheap but it made the kids so happy.” 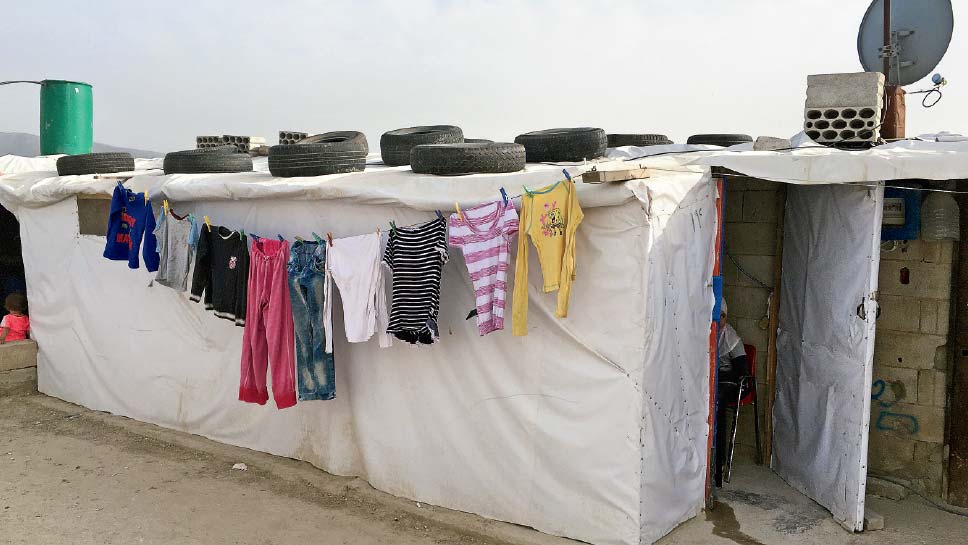 Because the doctors were so focused on seeing as many patients as possible during the day, the magnitude of the day’s events would often register at night on the bus ride home from the Beqaa Valley. Saleem would converse with Safwan about the day or blog about his trip in daily posts on social media as a way to clear his mind.

“It was therapeutic to put my thoughts in a blog,” he says, “however I wanted to give people a personal perspective of what life was like for the refugees.”

In a seven-day mission trip, the 30 doctors performed 197 surgeries, 1,343 medical consultations, and impacted 1,559 refugee patients. Even though the doctors have regularly scheduled hours, Saleem said they never turned anyone away from the clinics.

“We go there to work. We know at the end of the day we have the comforts of home we are going back to,” says Saleem. “So my attitude is ‘Don’t say no’. We see anybody and everybody we can. Treating one patient or even saving a life could make a big difference. It could mean that a family stays intact. If it’s a female patient, oftentimes she may be a widow caring for her children or someone else’s children. If it’s a male patient, he may be in charge of caring for multiple families whose parents are missing.”

In fact, on the last day of their mission, they saw more than 200 patients in their clinic. The refugees don’t have access to public health care systems and malnutrition has led to children appearing far younger than their stated age. Medical conditions such as diabetes and hypertension are also poorly controlled. 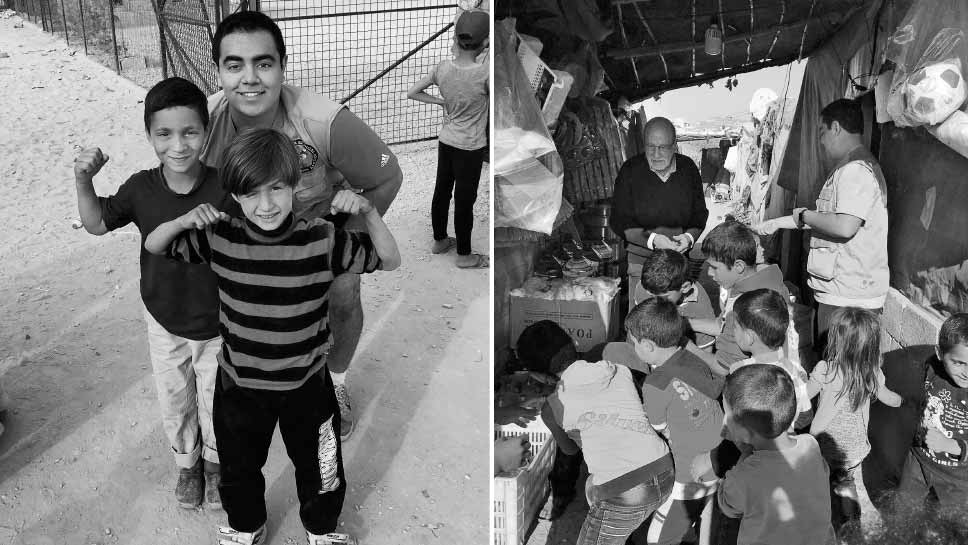 Although the language barrier proved challenging at times, it often led to comic relief moments during the day. When one patient, who only spoke Arabic, complained of chest pains and shortness of breath, Saleem, without saying a word, simply shrugged and tapped the packet of cigarettes in the patient’s pocket. When examining the patient, he put his stethoscope directly on the packet of cigarettes—again prompting laughter with a ‘guilty as charged’ acknowledgment from the patient.

All joking aside, Safwan appreciates how the experience of traveling to Lebanon and helping others has positively affected his view of the world.

“It was a life-changer for me,” says Safwan. “I saw people of all ages in the camps and it opened my eyes to what’s going on.”

Saleem, a father of five children, plans to continue medical missions and possibly take more of his children with him.

“People kept telling me what I would experience when I get there but it was beyond what I expected. The refugees never complained. The level of gratitude they expressed, just for us being there, was overwhelming and very humbling. I wanted my son to experience how fulfilling it can be to help others. We come away feeling a sense of fulfillment but at the same time we know there is tremendous work to be done,” says Saleem. “No doubt, the refugees inspire us as they gave more to us than we gave to them.”

For more information or to donate, visit www.sams-usa.net.