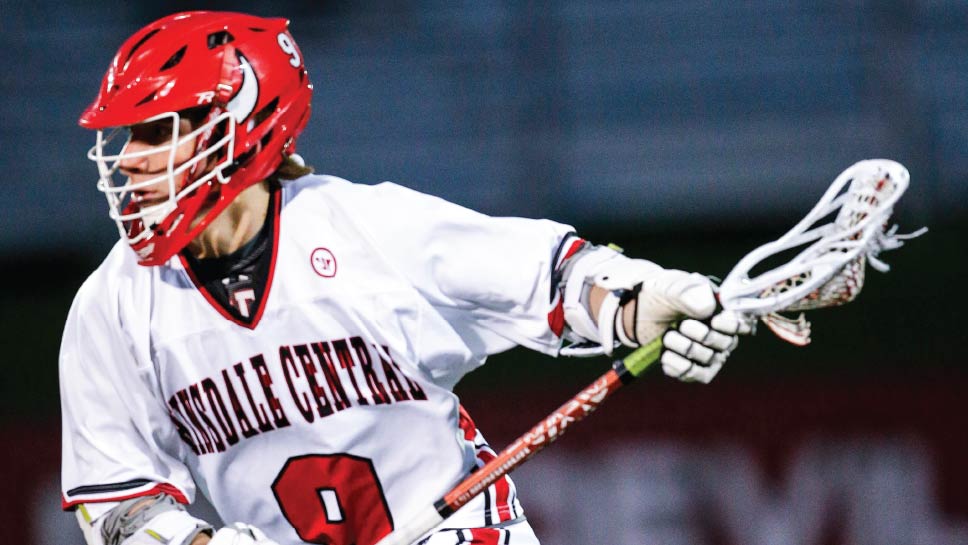 A Hinsdale Central lacrosse midfielder has the moves to maximize goal possession. PHOTOGRAPH BY JOEL LERNER

Before the goal or even assist during his lacrosse matches, Hinsdale Central senior midfielder Jake Simon thrives on creating the ultimate play.

The 5-foot-10 Simon, who will play next season at Arizona State University, is known for his ability as a faceoff specialist.

Simon has built upon his career as a captain this season with fellow seniors Colin Parker and John Kwasigroch and sophomore Jack Cain. Simon particularly understands the role because he was a late varsity call up as a freshman.

“He’s definitely one of the most intelligent players I’ve ever had the chance to coach. That kind of comes with being a faceoff guy,” second-year Hinsdale Central Coach Rich Mares says. “He’s a leader on the field, almost like a quarterback (in football). He’s helping teammates out, keeping the communication up, and offensively he kind of runs the show (with midfielders) Parker and Mark Ferrino.”

Until seven or eight years ago, Simon played the usual sports. He was mesmerized watching the NCAA men’s lacrosse championships on television and asked his mother, Dawn, about playing.

He began with a house league in Western Springs. Next came travel lacrosse with New Wave and four years with True Lacrosse, which he said has been instrumental in preparing him for college’s skill level and recruiting process.

“I wanted to get better and better and work harder,” Simon says. “I never was the greatest at any of the other sports. Once I was in middle school and started playing (travel), I realized I could be successful.”

Interestingly, Simon feels lacrosse incorporates many of the assets from other sports. Ben, his sophomore brother, plays lacrosse for the junior varsity. Alex, his freshman brother, is a football and baseball player similar to their father, Rich, who primarily played baseball.

“My ideal job is a product designer for a sports company,” Simon explains. “When I was a kid, and especially now, too, I like to have the best gear when I play. When you have good gear, you have a competitive advantage. Doing that for other people is what I’d strive to do.”

Simon is also heavily involved with his youth group and leadership community at Christ Church of Oak Brook. He has been on three mission projects, including a memorable 2015 summer in Tijuana, Mexico. He was among six groups of 12 that built houses over five days.

“It’s kind of just lacrosse and church. Those are pretty much the two predominant things in my life,” he says.

As a midfielder, Simon is the lacrosse link between the offensive and defensive units. He’s in almost constant movement and mental and physical transitions.

However, during his freshman year, Simon simply wanted to contribute. After an injury to Kyle Hyland, a 2016 first-team Illinois High School Lacrosse Association selection now playing at Notre Dame, Simon was promoted to varsity for the end of the regular season and the IHSLA playoffs.

“Looking at teammates as a freshman, I was amazed how tall and big they were. I felt right away, ‘Hey, I can play with these guys and succeed, even as a freshman’,” Simon says.

These days Simon’s role has expanded, and he loves the responsibility.

“Looking at those (past) seniors, how they led, I learned what I should and shouldn’t do,” Simon says. “I’ve been able to kind of direct people more and be that helping hand. (I’m) more someone caring for other players than just focusing on what I can do.”

During the summer of 2015, Arizona State first recruited Simon at a lacrosse showcase in Schaumburg. In Maryland, he played for a select team created by True Lacrosse that reached the semifinals of a national invitational.

“Our first game we won 18 or 19-2,” he says. “Coming together and playing a complete game, even though we had never played together, was one of the coolest moments I’ve had playing lacrosse.”