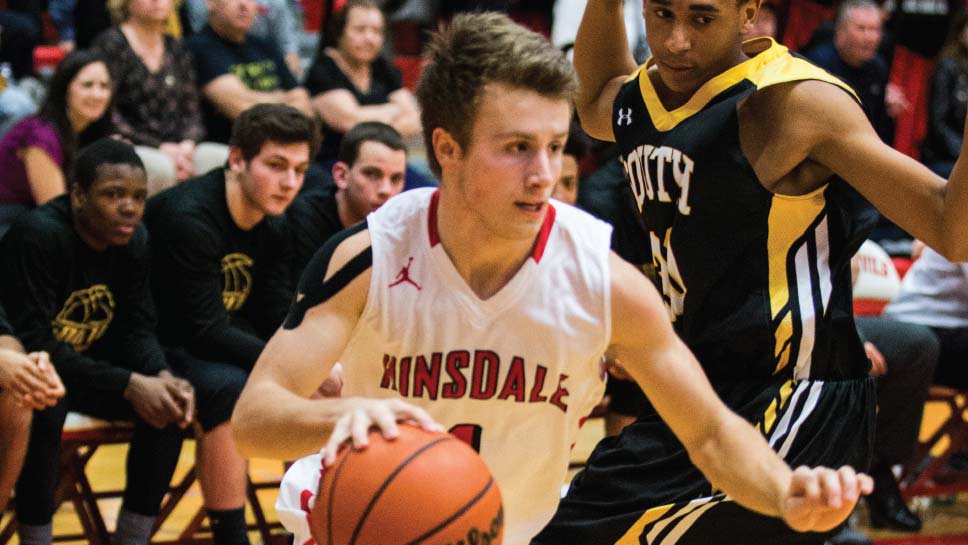 Hinsdale Central senior point guard Jack Hoiberg may have been born with basketball genes, but at 5’ 9” not necessarily the desired height.

“I think that really size doesn’t matter that much, as much as everyone thinks it does,” Hoiberg says. “Usually I’m the smallest player on the court, but it doesn’t really faze me. It’s how much confidence you have as a player and in life. If you don’t have the confidence, it kills you.”

With his confidence increased on the court this past season, Hoiberg made a huge decision regarding his college future in February.

Hoiberg opted to de-commit from his NCAA Division I men’s golf scholarship to the University of South Dakota to join probably a Division I men’s basketball program as a walk-on. In boys’ golf, Hoiberg was among the six-player lineup that helped the Red Devils capture a fifth straight Class 3A team state championship in October—a state record in any class.

“The (golf) decision never really felt right. I didn’t want to give up my dream playing college basketball,” Hoiberg says. “I’ve thought about (playing both at a smaller school) but I just want to take the basketball route. I can play golf my whole life. With basketball when you’re pretty much done, you’re done.”

From Hoiberg’s days with the mini-Nerf hoop, basketball always has been a part of his life. His father, Fred, is in his second season as head coach of the Chicago Bulls.

The Hoibergs returned to the area after Fred spent five seasons as head coach at Iowa State University, his alma mater, in Ames. During a 10-year NBA career, Hoiberg played for the Bulls from 1999-2003.

“The only thing I remember was during the pre-game when they would turn the lights off, I’d be scared so we just went up to the Bulls store,” Jack Hoiberg said. “I didn’t really realize (his celebrity) until we moved to Iowa in sixth grade. I was just used to it growing up.”

This time around, Hoiberg is a full-fledged Bulls fan. He attends as many home games as possible or watches on television. He also enjoys watching college basketball — and golf.

“Very calming,” Hoiberg said. “I’m thinking about (majoring in) sports management and getting into coaching, something with basketball, following in dad’s footsteps.”

In many ways, Jack already has. Fred Hoiberg was a highly regarded NBA three-point and outside shooter— a quality Jack always stresses. Fred, though, also is 6-5.

“I don’t even know how that worked out. Hopefully I’ll get a spurt sometime soon,” Hoiberg jokes. “You can never be a good enough shooter in my opinion, and that all comes with confidence.”

This season, Hoiberg led the Red Devils with a 15-point scoring average and most weren’t from the perimeter. Hoiberg readily attacked the basket, often earning trips to the free-throw line.

As a freshman, Hoiberg played at Gilbert High School in suburban Ames. In mid-season, Hoiberg was promoted from the freshman team to varsity and had a 27-point game. The varsity won conference his sophomore year.

Hoiberg needed to adjust to a new system at Hinsdale Central, a school with an enrollment 6 1/2 times more than Gilbert. But from Latorre he learned toughness and to play with heart.

It’s reflected in his becoming an excellent defender.

“He usually draws one of (our opponents’) top two players. He’s done a terrific job guarding guys bigger and stronger than him,” Latorre says.

His first sports accomplishment as a junior was just making the boys golf team. He did not play at 2015 state but he improved to play both 18-hole rounds at 2016 state. The Red Devils (593) won by 25 strokes.

“My goal this past summer was to earn a golf scholarship,” Hoiberg says. “And I got that opportunity.”

Golf remains important to Hoiberg. He often plays with his father, whose interest grew during his NBA off-seasons.

“The biggest similarity (between the sports) is the mental part,” Hoiberg says. “I focus on the (basketball) game and just see my teammates and coaches out there. I don’t notice the fans or heckling or anything.”

A basketball player Hoiberg would like to meet? Steph Curry from the Golden State Warriors for his multiple sports talents.

“Being a golf and basketball guy and how great he shoots the ball, it’s fun to watch him,” Hoiberg says. “He’s a really good golfer.”