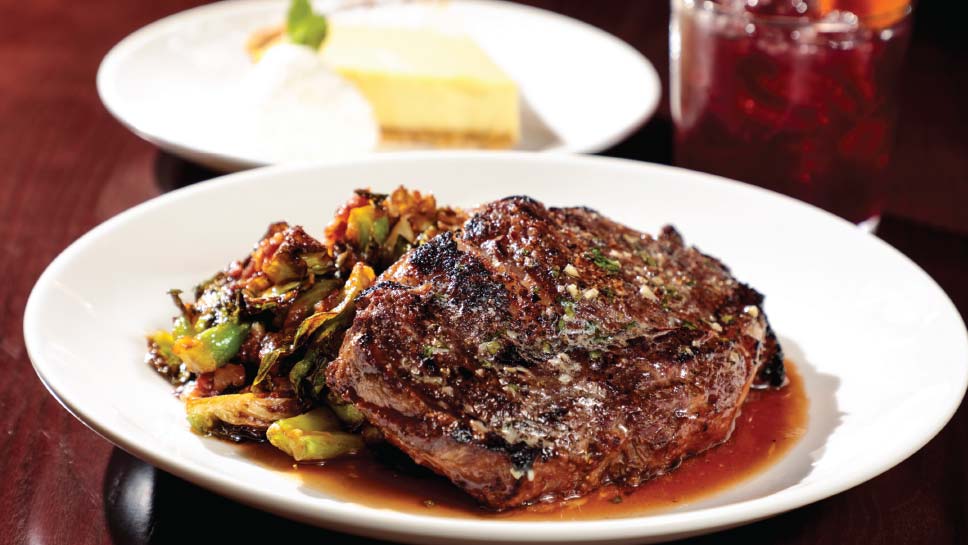 Steak + Vine does it right. The atmosphere is simple and effective. Exposed brick walls and a vaulted ceiling create two wide-open spaces for fun, social evenings. The dining room has its name written large, stencil-style, across the wall in bold block letters. The other walls have an assortment of lovely modern artwork. Stately steel pendant light fixtures light each table.

In other words, it’s like hanging out in a cool, laid-back artist loft.

The menu, however, means business. It’s the best of steakhouse, seafood, fine dining, and American comfort food all rolled into one with a strong personal approach to each dish.

Chef Michael Wilson was the corporate chef for Morton’s Steakhouse for eight years, introducing the mouthwatering bacon-wrapped scallops in apricot chutney. So we couldn’t turn down Chef Michael’s Bacon Wrapped Scallop from the appetizers menu. The crisp bacon and silky scallop are the perfect combination of smoke and butter flavors. The apricot chutney is very preserve-like with a subtle kick of heat from horseradish and grounded by a little earthy frisée.

Another seafood starter, the Stuffed Jumbo Shrimp takes fresh shrimp and stuffs it with crab, water chestnut, cream cheese, and roasted red bell pepper, covers it in panko breadcrumbs, and fries it. They deliver a satisfying fish fry flavor with an undercurrent of creaminess. They’re especially good with a dab of chipotle aioli sauce that sends a nice spicy sting to the back of the throat.

The Baked French Onion Soup is a recipe that Steak + Vine owner Nick Gangas adopted from his father George’s restaurant, In Kahoots, which used to be located across the street, where Gangas and Chef Michael first met each other as busboys. It’s incredibly decadent, with a bubbling cap of provolone and smoked Gouda cheeses over rich beefy broth, onions that dissolve in the mouth, and thick croutons. It carries a thick, delicious warmth that feels restorative and is so popular that it’s also featured on the menu at Chef Michael’s Key West restaurant, Michael’s.

Throw away any preconceptions of a typical house salad when dining at Steak + Vine, the S+V House Salad is a masterpiece. Long after our visit we continue to describe it when out to dinner with friends. Thick chunks of salami and provolone cheese lead the top notes before spikes of flavor from red onion, red bell peppers, and thin slices of banana peppers. Hard-boiled egg and Parmesan dressing provide a creamy through-line. The pièce de résistance comes from grill-charred shrimp around the perimeter of the plate that inject an unexpected and very welcome smokiness.

Given the name of the restaurant, we couldn’t walk away without trying the 16-ounce USDA Prime Ribeye Steak. A thin grill crunch at the exterior wraps around an extremely tender, wet-aged, prime-grade steak we ordered medium rare. It was succulent and perfect. We chose to pair it with Candied Bacon Brussels Sprouts, which have an almost cotton candy approach to the hearty vegetable. Pair this steak with a nice dry red wine and you’ll take the full ride as promised by the name above the door.

On the other end of the entrée flavor spectrum, we sampled the Shrimp + Grits, fresh, flavorful Key West Pink Shrimp with chunks of Spanish chorizo sausage, little pockets of zing from chopped scallions, all over a mound of cheesy stone ground grits. The rich cheddar flavor in the grits, combined with the sausage pull this dish deep into Cajun flavors, but the fresh shrimp tempers the spice with a lilt of the sea.

Their dessert menu is split between confections made in-house and bakery created by two high school students from Riverside known as the Sugar Sisters. We sampled a few lovely bites from a thick slice of Sugar Sisters Carrot Cake, generous with cinnamon and wonderfully dense and textured against a delicious cream cheese frosting.

However, given Chef Michael’s other establishment in Key West, we had to try the Key Lime Pie. Lovely bright green and covered in a sprinkling of powdered sugar, this pie is delectably tart with a big dollop of housemade whipped cream acting to reset the palate for each subsequent citrus-loaded bite. 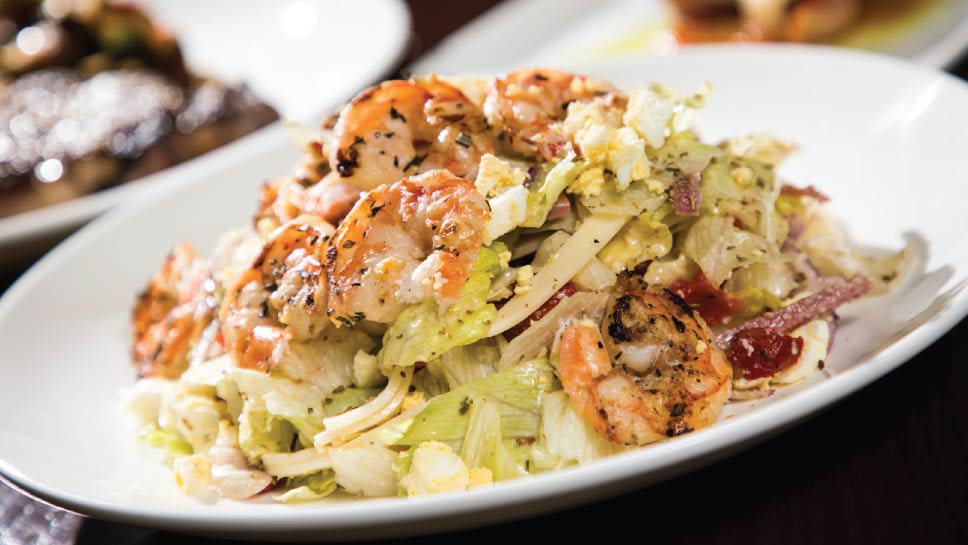