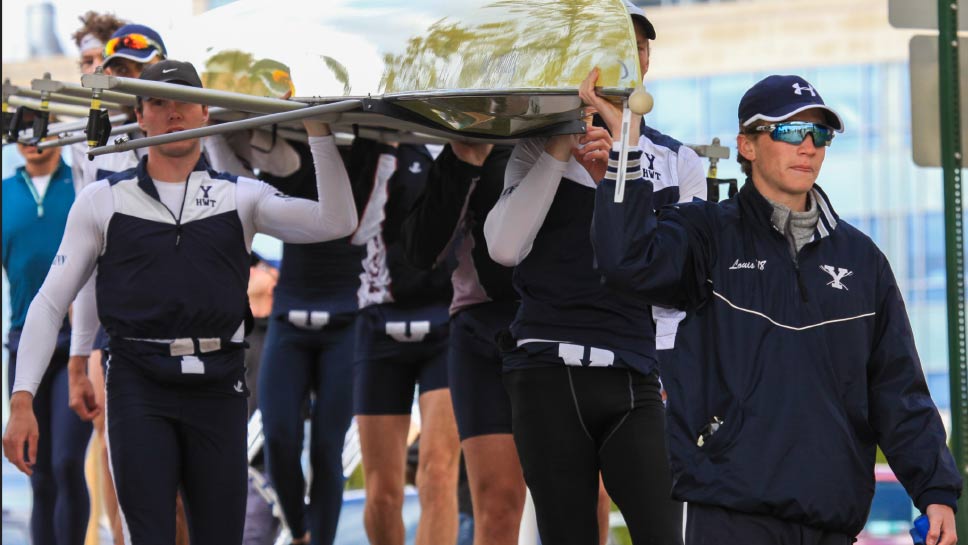 Amy and Steve Louis of Hinsdale have always been athletic. But seeing their son as a coxswain at Yale rekindled a passion in Amy Louis that began many years ago in high school. She attended Choate in Connecticut and was expected to participate in a sport, as all students are required to do.

“One of my sports at Choate was rowing and I had a blast,” she says. “It’s a lot of work, but it’s so much fun. When I went to college in Colorado though, they didn’t have rowing as an option, so I stopped.”

As time went on, Louis had three sons who all attended Deerfield in Massachusetts.

“My middle son was really tiny as a freshman. When it came time for him to select a spring sport, I encouraged him to try rowing as a coxswain. One season and he was hooked,” she explains. “His junior year, he was invited to be on the U.S. National Team as a coxswain and he competed in Lithuania. It was pretty incredible.”

One day, as she was standing on the side of the river cheering on her son, Louis realized how much she missed rowing.

“I got so aggravated standing on the riverbank because I personally missed rowing so much,” she says. “I remember thinking, I have to get back in the boat.”

So, Louis and two of her sons decided to attend a rowing camp in Craftsbury, Vermont.

“We rowed three times a day. We were up at six. It was hard,” she says. “But I loved it so much that I decided to buy a boat.”

Louis purchased the boat and used it at her lake house all summer long. When it was time to leave the lake, she couldn’t leave the boat behind, so she threw it on the top of the car, uncertain of where she could use it in Chicago.

In the meantime, local friends, Marion and Gerry Jablonski, had connected with rowing. While living in London, their son and daughter had become deeply involved in rowing, propelling their daughter Janine to Dartmouth and their son Jack to Princeton.

“Funny enough, we discovered that they had a boat just hanging in their garage too,” says Louis.

With the help of Google Earth, Amy and Gerry Jablonski decided their boats had hung unused long enough. They began to venture out to find water and launch their boats. While they were successful, their adventures took them further away then they needed to be.

“My husband Steve realized that Madison Street dead-ends into the Des Plaines River at a truck parking lot,” laughs Louis. “No one knows this huge, accessible river is right here in our backyards.”

From this revelation, the couple began what became their own passion project for the western suburbs—Hinsdale Community Rowing.

The first step was securing permission to install a floating dock. Steve Louis petitioned the Army Corps of Engineers and was awarded permission after a six-month wait, then later rented an abandoned shed and parking spaces adjacent to the dock location. The Club’s floating dock gives them an exclusive launching for seven miles of the Des Plaines River. The couple purchased two shipping containers, built boat storage racks, and converted the shed into a functioning clubhouse.

Once the Louis and Jablonski family boats were moved into the containers, the club was ready for rowers. Along the way, they acquired additional single sculling boats, a double scull, and several kayaks.

Hinsdale Community Rowing focuses on sculling, the rowing discipline in which each rower controls two oars. To ensure safety, it is required that members have one other person out on the water with them at all times.

“Most days the only other human you see during an hour on the river is your partner. The only noise typically comes from the heron colony. It is very peaceful,” Louis says, explaining how the program grew by word of mouth to the now 30 members it has today. “Rowing is a small world. Since we started Hinsdale Community Rowing, people have come out of the woodwork.”

They now have members who rowed at Harvard, Princeton, and Brown.

“We have National Championship rowers in this community,” says Louis. “We have a member who was on the Swiss National Team as well.”

But not all members brought previous rowing experience to the program. Many have worked with fellow club members to learn the sport.

Amy and Steve Louis encourage younger folks to participate in rowing as it is a great character-building sport.

“We’ve been frustrated that rowing isn’t available to students in the Western Suburbs,” she says. “New Trier High School started a rowing program in 2002. They have approximately 130 boy and girl rowers who compete at the highest level in regattas across the country. Our kids should have that opportunity as well.”

In addition to participating in one of the world’s oldest sports, students learn an array of skills that translate to life.

“It’s discipline, precision, attention to detail, following directions, working together, teamwork, tenacity, and grit—all the things we talk about wanting to teach our kids can be learned through rowing,” Louis explains. “Everyone works, wins, and loses together.”

She says rowing is an especially amazing sport for high school girls.

“It’s what is called an equalizer sport. Because Title IX requires colleges and universities to spend equal amounts on men’s and women’s sports, across the country schools have started women’s rowing,” she adds. “It is a great way to offset the high cost of football programs.”

Chicago’s rowing community is a small one and soon after it opened, Hinsdale Community Rowing got the attention of Mike Wallin, Head Coach of the Chicago Rowing Foundation (CRF).

Wallin has a distinguished rowing record at University of California, Berkley, and an equally impressive coaching record. He has built CRF into a powerhouse over the last 12 years, with graduates from his program being recruited by the Ivy’s top performing teams. CRF’s growth and success have pushed them to the capacity limits on their downtown water.

When Wallin first visited Hinsdale Community Rowing, he was eager to find a way to partner. With the shared goal of giving more students the chance to row, it didn’t take long to establish a plan.

This summer Wallin and the CRF coaching staff will offer a learn-to-row program from the Hinsdale Community Rowing dock. Interested students will learn to row in boats of eight (called 8’s). They will learn the essentials of the sweep stroke (one oar) and fitness required for rowing. In the fall, Wallin and his staff will operate a full competitive team from Hinsdale Community Rowing’s facility.

“We are so thrilled that area high school students will finally have the opportunity to learn and compete as rowers” says Louis. “We are confident it won’t take long before local students are finding success with rowing.”

Students interested in this summer’s “learn-to-row” program can find more information at rowchicago.com/summercamp. No experience is necessary. Interested adults may visit hinsdalerowing.com. 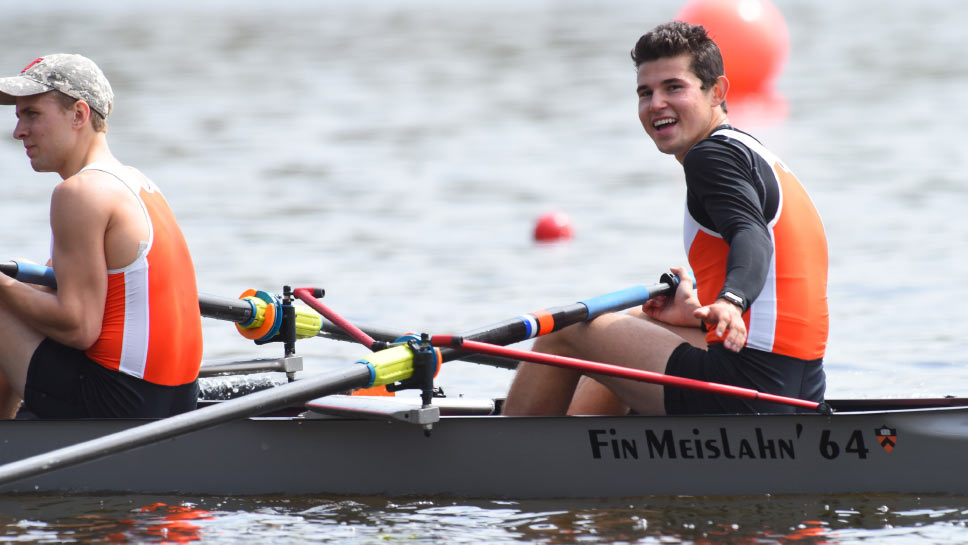 Jack Jablonski of Hinsdale rowing for Princeton against Harvard 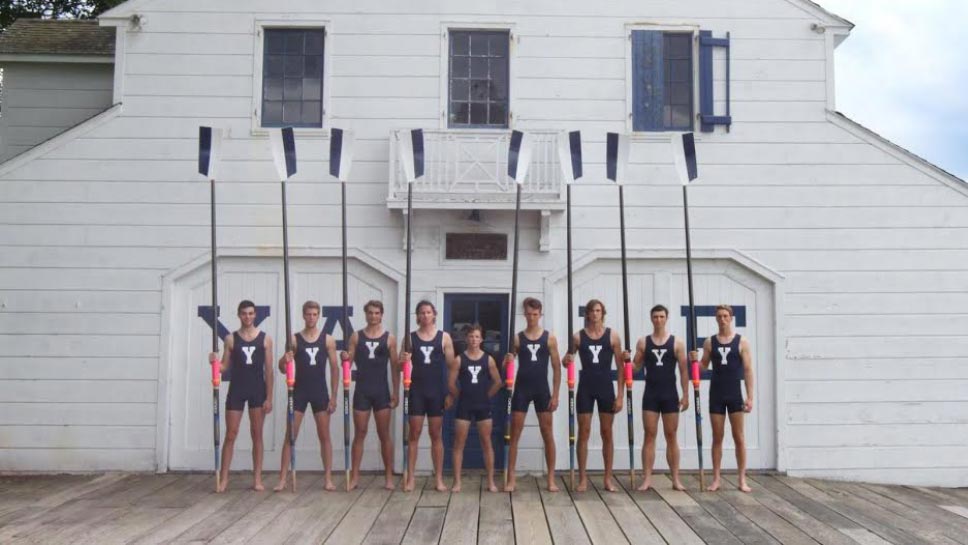