On March 17, many people will celebrate the patron saint of Ireland and all things Irish. The Misericordia Women’s League will host a St. Patrick’s Day party as well, but the group will celebrate a community that has changed the lives of countless families throughout Chicagoland and beyond.

The annual Misericordia “March Madness” event is expected to draw approximately 450 people to the Hilton Oak Brook Hills Resort to raise much-needed funds for Misericordia, Heart of Mercy Home—a community of children and adults with developmental and physical disabilities. 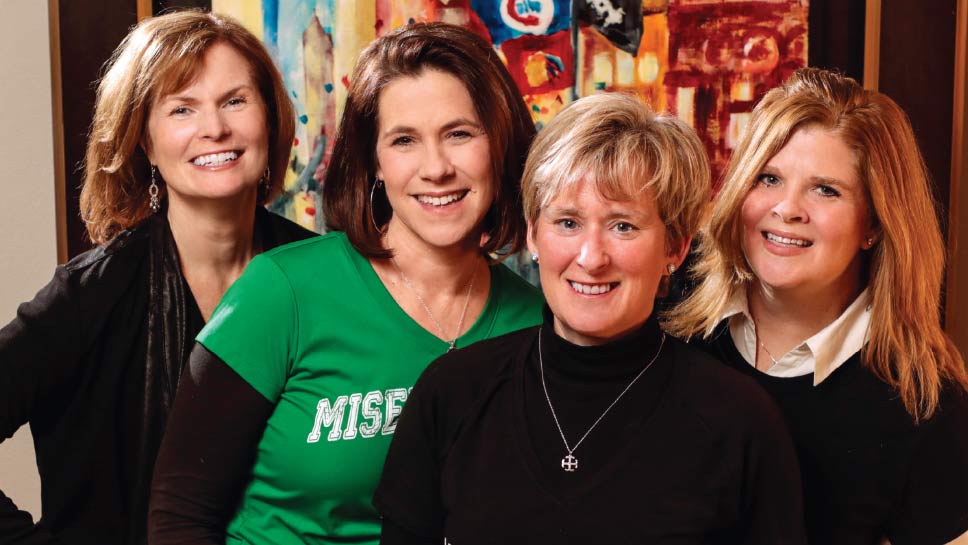 Misericordia, or “Heart of Mercy” in Latin, began in 1921 as a maternity hospital to help both wed and unwed low-income mothers. After recognizing a larger need for helping children with developmental and physical disabilities, Misericordia focused its efforts on them.

In 1969, Sister Rosemary Connelly, a Sister of Mercy, became an advocate for Misericordia and was determined to find programs that foster independence for children with disabilities. Today, Misericordia boasts a community of 600 individuals in a campus-like atmosphere that provides continuum of care and encourages independence for its residents.

Such programs include residential placement, employment opportunities (both on and off-campus), therapy, health and wellness, social, recreational, and more. It has evolved into a 31-acre, 600-resident facility located in the Rogers Park community of Chicago.

Families of Misericordia residents are equally grateful for Misericordia as it has a profound impact on the entire family as well. Lee Wilson of Western Springs is a long-time volunteer for Misericordia. In May 2016, her son Greg was welcomed into the program as a full resident.

“It’s a community within a community which allows the residents to be able to navigate the area independently and safely,” says Wilson. “It’s very much like a college campus. For Greg, we refer to it as his ‘college’.”

Misericordia fully encourages family involvement and the families of Misericordia are happy to oblige. The residents typically visit home once a month, for a week during the summer, and at Christmastime.

“They are providing my family and me with an unbelievable life,” says Wilson, who continues to express gratitude for the program and its Hinsdale area volunteers.

Patty Burke, President of the Women’s League, echoes Wilson’s sentiment. “Many of the families in Misericordia do as much as they can to give back by fundraising or visiting the campus and volunteering their time,” she says.

Outside the 31-acre property are C.I.L.A. homes (Community Integrated Living Arrangements) where individuals live together with aides.

“The individuals that live in the CILAs are usually very high functioning,” says Wilson. “They can navigate the Chicago bus system. They also get jobs, but then they are able to come back to the Misericordia campus and use the pool, the gym, the art department.” CILA residents also come back to campus to visit with friends for social activities, to work on campus, or to attend classes.

Residents at Misericordia range in age from children to elderly adults and it does not discriminate. Some of the residents have families and some are wards of the state, but regardless of economic status, all are welcome at Misericordia.

Residents are given employment opportunities and receive paychecks for their work. They love to work at the Hearts & Flour Bakery or at the Greenhouse Inn Restaurant which is open to the public Tuesday thru Friday for lunch and on Sunday for brunch. Artwork and bakery products made by residents are sold throughout Chicago. Artists also receive money for selling their artwork.

Yet, to support the programs not covered by the government, Misericordia must raise $15 million dollars annually. About 20 years ago, the Women’s League was formed in Hinsdale and the western suburbs and have been hosting annual fundraisers to help with the costs. Today, the league consists of 125 members, mostly living in the western suburbs, who are always willing to volunteer.

“Over the past 20 years, our league has raised more than $4.5 million for Misericordia,” explains Burke. “Misericordia survives and provides quality of care on the private dollar thanks to the generous communities like this one and all around Chicagoland.”

Wilson is co-chairing this year’s March Madness even with Liz Sheehan, working hard to continue the tradition of a fun-filled evening to benefit a great cause.

“We are using the same theme as last year because it was so successful and people really had a great time,” says Sheehan. “Even though it’s a March Madness theme, we will also have Irish surprises at the event. There is a lot of great things going on at this party.”

Guests are asked to wear their favorite college t-shirts to support the teams playing in the NCAA basketball tournament. CBS2 News Anchor Rob Johnson hosts the event while guests are treated to a sit-down casual dinner, drinks, and entertainment.

Guests will enjoy a DJ while watching the NCAA Tournament on multiple televisions located throughout the event. “The games are the big draw,” says Sheehan.

In the end, many lives will benefit from the event on March 17. “Misericordia has done so much for individuals and their families,” says Burke. “It’s truly an amazing place.”

To contribute to Misericordia or to purchase tickets for the event, please visit events.org/mismarchmadness.