And with a last name like that—Wrigley Field is on Clark and Addison—you would think that the Hinsdale Central junior swimmer would have loved the latest Fall Classic.

She probably can’t help herself. Her mother and her grandparents are from St. Louis. 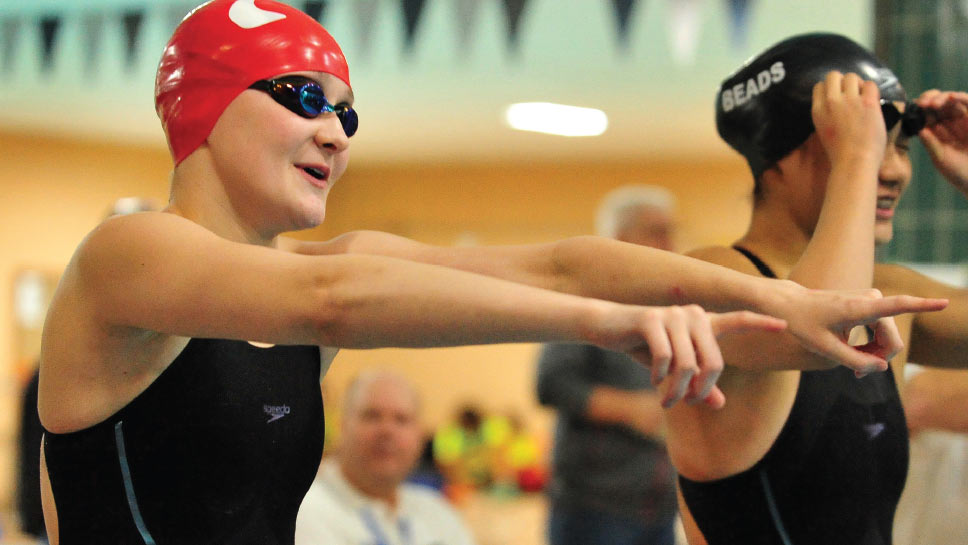 Hinsdale Central’s Hollis Clark, Mia Chiappe—and a few of their friends—turn in hit performances at the state swim meet. PHOTOGRAPHY BY STEVE HANDWERKER

And she’s deeply devoted to the Cubs’ archrival. This water dart is even known to keep score while watching games, a skill taught to her by her grandfather when she was eight—while watching Cardinal games.

Clark, however, was part of an indoor Fall Classic, helping the Red Devils to a ninth-place finish at the IHSA state swimming and diving meet on November 19 at Evanston High School.

Clark had the team’s top individual finish: eighth in the 100-yard backstroke (57.05). And the baseball fanatic served as none other than the lead-off leg of the team’s sixth-place 200 medley relay.

“This is pretty new for me. I’d been pretty average. It’s kind of a breakout year,” says Clark. “Really, looking back, I wasn’t dedicated to the sport. I was doing it just for fun. It’s all about the work. I started to treat every practice like a finals race.”

“We’re just extremely proud of how hard she worked to get to where she is this year,” Red Devils swim coach Bob Barber says.

Meanwhile, Hinsdale Central senior Mia Chiappe was the team’s other heavy hitter. She claimed an 11th-place medal in the 100 freestyle (52.72) and connected for a triple, earning a state medal in each of the three relays.

Chiappe teamed with Clark, junior Emily Graham and freshman Anna Gruvberger in the 200 medley (1:44.86). The foursome had set a school mark in the preliminaries (1:44.38).

And, in Saturday’s finals, Chiappe collaborated with Graham, Gruvberger, and junior Stephanie Bowater to clock a seventh-place 3:29.98 in the 400 free.

Chiappe’s big day at state wasn’t a surprise. The four-time state qualifier entered the meet as the Red Devils’ most decorated performer.

“She was the person the team needed to lean on,” Barber says. “She had more state-meet experience than the other girls had. Medal-wise, for sure, it was an incredible thing for her,” the coach adds. “It was kind of a dream season for her.”

Chiappe tried soccer, gymnastics, and dance, but swimming eventually won her over.

“My dad signed me up for lessons when I was seven,” she says. “I wasn’t really good at anything else, so I stuck with swimming.”

Chiappe arrived in the Evanston natatorium with not-so-fond memories from the 2015 state meet where none of the team’s six entrants advanced to Saturday’s finals.

“I focused all season on returning to the finals,” Chiappe says. “Doing what we did in the relays was really exciting.”

Chiappe plans to swim in college and major in special education. At Hinsdale Central, Chiappe enrolled in adaptive physical education to assist students with their activities, a year after joining Peer Buddies, which organizes additional events outside of school.

“I just enjoy how swimming is a sport where you can seek your own goals, but then you have relays where you can achieve things with your teammates,” Chiappe says.