Hinsdale Central senior tennis player Megan Guenther has a lifetime goal of visiting all 50 states in the U.S.

And she’s already well on her way to accomplishing that objective—around 30 so far. Guenther recently added the Carolinas during a weekend trip with her mother. At a forest preserve just across the border into South Carolina, Guenther hiked a cliff and became mesmerized.

“It was the most amazing view,” Guenther says. “I wasn’t really expecting much because it was only a .8-mile hike, but it was really steep and when you get to the top, it just opens up. I made it the background on my [cell phone].”

In her final season with the Red Devils, Guenther really enjoyed the unexpected.

Guenther made her first trip to the state tournament and joined senior all-state veteran Erika Oku to win the Class 2A state doubles championship, helping the Red Devils capture their fourth straight team title and state-best 17th in the first year of the two-class format. 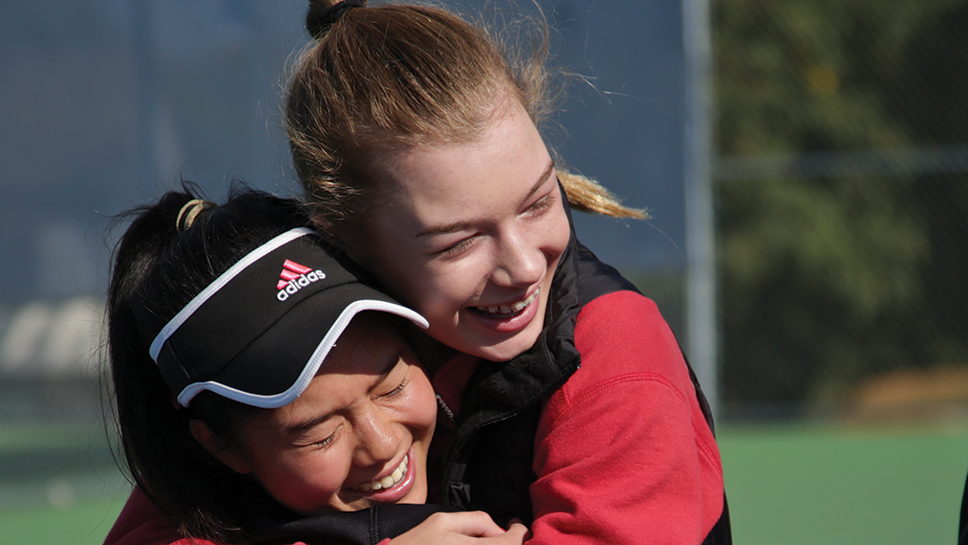 Red Devils teammates Carolyn Ahn and Mira Amin were sixth in doubles, while Olivia Oosterbaan ended up tied for seventh in singles.

“We had this huge group hug going. That’s when it finally sunk in, and it was crazy,” Guenther says. “I honestly couldn’t believe it. It was so surreal. The past three years I never even thought that I would go to state. Maybe I would my senior year, but I never imagined I’d win it.”

In a battle of unbeaten pairs, Oku and Guenther (18-0) defeated Glenbrook North’s top-seeded duo of Colette and Catherine O’Regan 6-2, 6-2 in the championship.

“Amazing,” says Oku. “The minute Megan made that last shot, I just felt the adrenaline was kicking in. I was like, ‘Oh my God, I just won state.’ I was kind of tearing up because I was so close the past three years.”

Their victory truly was historic. Oku became the 10th Hinsdale Central doubles player to claim top-eight finishes in four state meets—and the first to do it with three different partners.

Guenther, meanwhile, became the first player at Hinsdale Central to win a state title in her state debut.

“They were focused,” Hinsdale Central coach Scott Radecki says. “They locked in right away in our first practice.”

Guenther and Oku have known each other since age 8, often playing tennis at the same clubs or against each other in USTA tournaments.

As juniors, they played doubles once, netting a victory over Oak Park-River Forest. Oku finished fourth at state with senior Danielle Burich after taking second in 2014 with junior Stephanie Dolehide and fifth with Burich in 2013.

This season, Burich decided not to play high school tennis, and Dolehide played singles at sectionals. Oku and the left-handed Guenther meshed during the preseason.

The duo thrived by staying calm and maintaining an upbeat outlook in matches.

In 10 postseason matches, the seniors lost one set.

“I knew she knew what to expect [at state]. Throughout the season I knew I could trust Erika,” Guenther says. “I honestly would say within the first two weeks of playing with Erika, I knew we had a great shot at winning state.”

Oku not only brought a wealth of state-meet experience, but she also owns some of the best shot-making abilities around, according to Radecki. Oku believes her sound coordination stems from her six years of playing competitive ice hockey.

“I actually played both tennis and ice hockey at the same time for two years,” Oku says. “[But] I quit hockey. It’s too dangerous.”

Oku also has played the violin since she was 4 years old and performs with the school orchestra. She recently missed a “mandatory” tennis practice to audition for the Illinois Music Educator Association orchestra. Besides hiking and running and crossing state lines, Guenther enjoys creating vases with a potter’s wheel at home.

Both players plan on playing NCAA Division III tennis. Oku is considering a major in political science, while Guenther is leaning towards chemistry or earth science.