Dr. Kuhn Hong grew up in South Korea, practiced medicine in the United States for 34 years before retiring, and for the past three years has been living and working at a hospital in Ethiopia. To say he’s had an interesting life is an understatement.

As a child in South Korea, his family was forced to flee their home during the Korean War.

“We were displaced with no food, no home, no clothing, and no toys. I was 5 years old,” Hong says. He developed a habit of doodling on used paper for lack of other toys, and soon became a talented artist. He won prizes throughout school and wanted to pursue a career in art, which his father discouraged. There was no way for an artist to make a living in Korea at the time, so he went into medicine.

When he moved to the United States for residency training he found it hard to adjust, and lacking strong English skills at the time it was hard to find a suitable internship.

“I thought, I need a profession where you don’t need proficiency in English, and then I realized radiology is based on pictures. I have a talent for 3D and art in my brain,” Hong says. 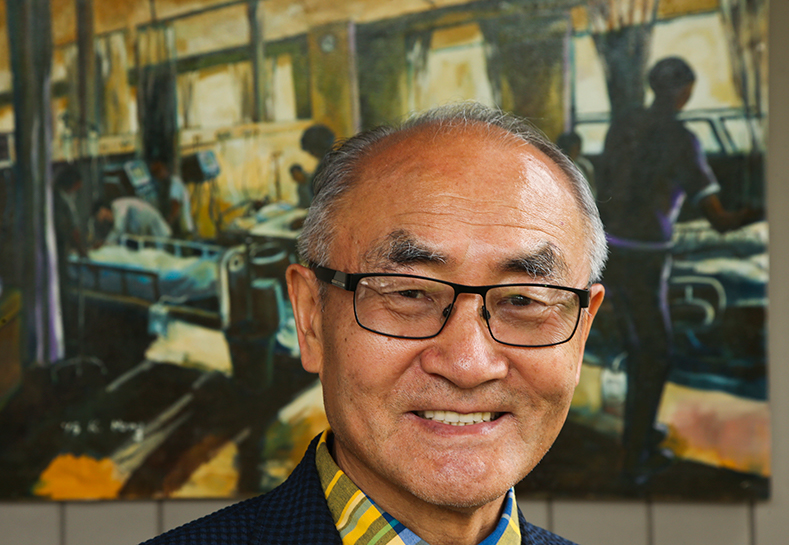 He caught up quickly and loved radiology. At the time, in the 1970s, things like the CT scan and ultrasound were only available in larger research institutes.

His private life developed as well. Hong was raised Buddhist, but became Christian in the United States.

“I came to America from a country of opportunity to learn modern technologies and have a better living and raise children with a good education and so forth, but in this stage of life I dedicated myself to Lord and Christ. Eventually, though my life was very comfortable in America, I thought there must be more than going to church on Sunday,” Hong says.

He took his first medical mission trip to the Amazon Basin of Peru in 1997, and later Honduras, Kenya, Cameroon, Egypt, North Korea, and many other countries where medical assistance was needed. His religious background helped.

“Because I came from a Buddhist family, I could relate to people of other religions,” he says.

Eventually, after a trip to the Myunsung Christian Medical Center in Addis Ababa, Ethiopia, he found a place to stay.

“What’s important to me is my medical knowledge and my conviction in Christianity. Ethiopia is the perfect setting for both,” Hong says.

Sometimes, he goes to rural areas and gives both evangelical speeches and medical assistance.

After retiring from a hospital in Chicago in 2013, Dr. Hong moved from Hinsdale to Ethiopia permanently. He works out of the Myunsung hospital, which was established 11 years ago with a $60 million grant from South Korea. It has 240 beds and sophisticated MRI and CT equipment, which is rare for mission hospitals in the area.

Hong thought he would work as a radiologist interpreting scans, but soon found there was a need for interventional radiology. Looking at images and verifying if a cancer is inoperable by performing a biopsy, for example.

“Then, the patient doesn’t have to go for open surgery,” Hong says. “If they have surgery by an inexperienced surgeon at smaller hospitals, complications can arise.”

With all this, Hong still finds time for art, and even had an exhibition of his work in Korea in July. He believes having a variety of skills has helped him in his life, and can help in Ethiopia too.

“My challenge to the people of Hinsdale is to visit a country as a short-term trip and explore what you can do for others. You would be surprised. If you come to our hospital, there are many skills needed, not only medicine,” he says.

As for himself, he plans on staying in Ethiopia for a very long time.

“Ethiopia has a very deep history and culture,” he says. “I can work there. I can do art there. I can preach there. I lived in Korea for 26 years, Hinsdale for 40, and I plan to stay in Ethiopia for another 40 years.”