“When my friends started becoming grandparents, I watched them from afar with their experiences,” says Cheryl Harbour, an author and mom of three boys who raised her children in Hinsdale and called it home before moving to Burr Ridge three years ago. “When I found out my son and his wife were going to have a baby, I just assumed I’d be able to immerse myself in information about grand parenting, and I went looking for a book about that.” She didn’t find it.

Instead, she wrote it.

Harbour is the author of Good to Be Grand: Making the Most of Your Grandchild’s First Year. The book is a guide for new grandparents, and much of the material came from Harbour’s research on the topic from watching and interviewing many of her friends she had made in her 35 years in Hinsdale. She also spent a significant amount of time reading books and doing research on relevant information on child development, genetics, family dynamics, parenting philosophies, and more. 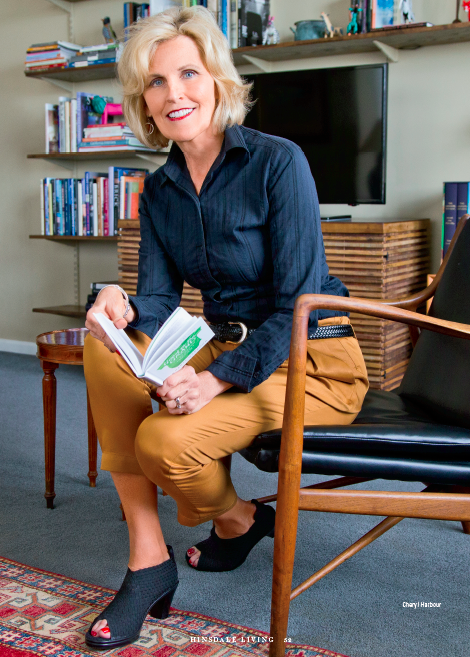 She wrote the book throughout the pregnancy and first year of her grandson’s life. “Everything I wondered about and every term, I did the research and found the most reliable thing to read,” she says, and soon the book became a primer on making the most of the new grand parenting experience.

As a primer, the book is useful for a number of reasons, but specifically because it outlines some of the key differences in parenting a generation removed. For example, Harbour says, “Babies don’t sleep on their tummies anymore. That has totally reversed,” she says. When she was raising her children, parents were encouraged to sleep their babies on their stomachs. After doing the research for her book, Harbour understands the change has to do with SIDS. “But along with that came a whole new industry on helping babies sleep better,” she says.

The book also outlines some of the key parenting philosophies prevalent today such as attachment parenting.

“The whole baby wearing trend is really new,” she says. “I also felt like a lot of the things we knew, we didn’t know why,” she admits. “For example, there has been so much research since about how babies’ brains develop and why you read to them so early. By the time they are 3, 90 percent of their brain connections have developed.”

Harbour also delves into family relationships and how networks form around a new child—specifically discussing the relationship between the new parents and the grandparents.

“Most people agreed that the parents lead the relationship,” she says. “Smart grandparents seem to accept that. You have a general attitude of cooperation and acceptance and go along with what the parents decide.”

“I’m not a proponent of anything in the book,” she says. “I just want to present the information. I find that people are interested in learning, and then you make your own choices.”

Another fun fact: The presumptive democratic nominee for president Hillary Clinton wrote the foreword for the book. She and Harbour were Sunday school friends and went to high school together. They were both expecting their first grandchildren around the same time. “I sent her the manuscript and she used it to learn some things, and I half jokingly said you should write the foreword. And she said ‘I will.’”

Harbour’s life has certainly changed a lot since she welcomed her first grandchild, and one of the key things she learned during the researching, writing, and later discovery phase of grand parenting is that all of a sudden, you’re more invested in the future.

“It’s like you have skin in the game again and you’re really personally caring about the future,” she says. “All the new experiences are fun. Getting into the mindset of this little child that you appreciate so much gives you a sense of wonder, and you rediscover how to play and be silly. At the end of the book I include some quotes by famous thinkers that span the whole variety of relationships and philosophies about being in the moment and being here now,” Harbour says. “One of my favorite quotes is along the lines of ‘Stay close to whatever sounds make you feel alive.’ I think of that as ‘Stay close to any person that makes you feel alive.’

That doesn’t have to be a grandchild, but it certainly can be.”

Good to Be Grand by Cheryl Harbour was recently listed as No. 1 on GRAND Magazine’s Best Books for Grandparents. You can find it on amazon.com and at all the major retailers.