Becoming a photographer was never part of Megan Drane’s master plan. She didn’t go to school for it; she had a master’s degree in writing. In fact, she learned early lessons in photography by taking photos of her infant son.

Then her best friend got pregnant. “She said, “I want you to take my pictures,’” Drane recalls. Her friend had seen all the photos Drane had taken of her son and loved them. She had little interest, but she decided to do it for her friend. Then those photos went out to everyone in their social circle, and before she knew it, Drane was operating a photography business on the side.

It’s now nine years later, and Drane, a mother of two, is the owner of Firefly Nights Photography. “Realistically, it was more of a hobby at first while I worked a full-time job,” she says.

“It was fun, and I like being creative.” Drane also took formal classes when she started working with film, and later taught herself editing when everything moved to digital. 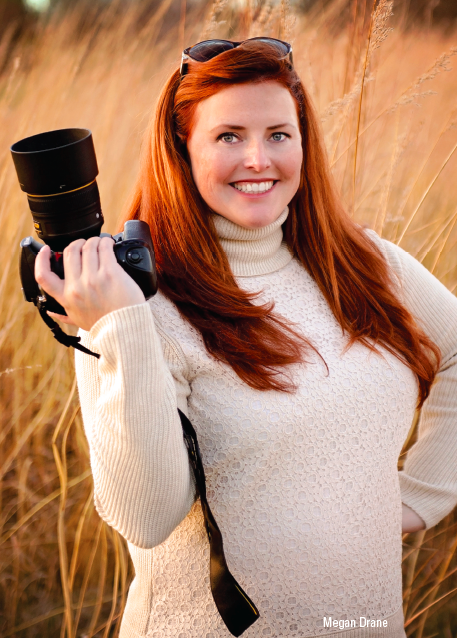 Close to five years ago, she decided to make it a full-time business, and she opened a studio in downtown Naperville.

A writer by trade, Drane draws some parallels to the creative writing process. “Photography is like storytelling visually,” she says. “I try to plan a story and do it well and thoroughly.”

Today, Drane focuses on portraits. “If there are people in them, I’ll photograph it.” She does both studio and on-site shoots, but not weddings. She doesn’t necessarily specialize in one kind of portrait photography—she does families, children, babies, maternity, teens, and more. But she does have one special area of focus that few photographers tackle: special needs children.

Drane’s son has Asperger’s Syndrome, or high-functioning autism, and she has been photographing him since he was a child. “I was photographing a client and she was talking about how her sister has a son with autism; he’s nonverbal. And she’s never been able to do photos with him. So I gave her my name, and I went and photographed him.

“When families know that you actually personally get it, they are so relieved because so many have horrible stories about experiences with other photographers. With special needs kids, you can’t have a plan, really. You have to be extremely flexible and patient, and nothing they do bothers me.” Drane’s assistant also has a special needs child with cerebral palsy, autism and epilepsy. Firefly Nights does special needs mini sessions in April during Autism Awareness Month.

Drane’s studio has helped her keep business steady throughout the year, especially during colder winter months. “I do shoot out in the snow, but the snow is unpredictable,” she says. “I actually wish we had snow for two full months.” For those times during the year when the weather is uncooperative, Drane can use her studio—which is more like walking into an urban apartment—for sessions.

“Every year I try to do something new,” Drane says. “This year, I’m focusing on print composition and dabbling with composite work,” which is combining multiple shots into a single image. “When people see them, everyone loves them, but a single image takes hours to create. But I would love to get these going as another one of my offerings.”

This story was sponsored by Firefly Nights. Firefly Nights is located at 120 S. Webster Street in Naperville, 630-585-7959, fireflynightsphotography.com.