Junior Gianni Frasca has been a member of the Hinsdale Central football and wrestling programs.

With the new Hinsdale Central rugby club this spring, he is living the best of both sports worlds—and then some.

“It’s exactly like football and wrestling combined. And soccer. Really that’s all it is,” Frasca says. “It’s easily the hardest sport I’ve ever done, too. (Wrestling) was hard but you’re mixing wrestling with running. It’s just a whole a new game.”

Behind that coaching experience, the team still was undefeated after its first six matches in Division 3—the lowest of three varsity divisions used by governing body Rugby Illinois for high school programs.

There are 40 teams among the varsity divisions and 21 combined in junior varsity and frosh-soph divisions.

“When I heard they were trying to make a rugby team here at Central, I was all in. It might be the most fun sport I’ve played—for sure,” says senior Brady Garber. “They’ve been trying and trying and it finally happened.” 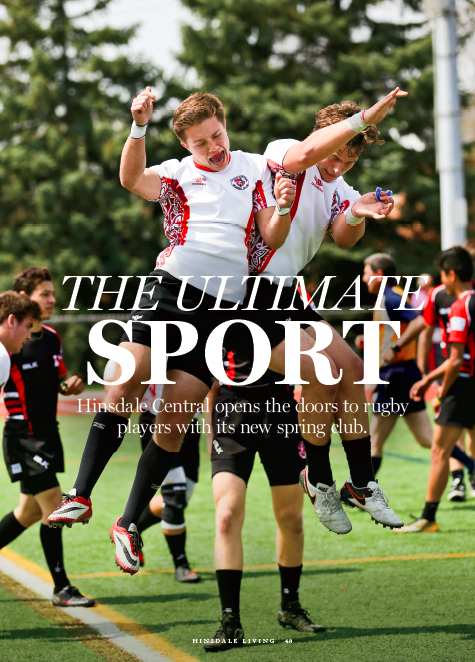 Gebhart got the ball rolling in November when he contacted Houia about his standing offer to start a program for Hinsdale Central. Gebhart and his brothers Jason and Anthony have played rugby with or for Houia. At a general interest meeting, the coaches hoped to attract about 20 students, enough for the necessary 15 field players with a few subs.

“I never imagined the response we got,” says senior and team captain Ryan Gleason, a varsity soccer player in the fall. “When I found out (rugby) was a spring sport, I was like, ‘Yeah.’ I have to say it’s the most fun I’ve ever had playing a sport. Honestly, I feel rugby is the culmination of athletic ability.”

About every player is starting from scratch. Many are seniors who played football, soccer, wrestling, and baseball. Garber will be a kicker for Miami (Ohio) University following three football seasons for the Red Devils. Other football seniors include linemen Will Hughes, Nick Kallas, Pat Lee, and Frankie Reyis and linebacker Matt Bradley. Seniors Michael Gee and Tony Lozanoski come from JV soccer.

In Rio, rugby will return to the Summer Olympics for the first time since 1924 with seven players per side.

“(Houia) tells us every day that we’re the first Central team and to be proud of that,” Frasca says. “Every game is so important because it’s the first season. We’ll be looked at as the benchmark.”

Gambino has played for 30 years and around half with Houia. Gambino has coached high school teams the past 10 years for Waubonsie Valley and the Warrenville Warthogs.

The coaches initially stressed the camaraderie of rugby and pride of wearing the jersey.

“The biggest thing for me is to give back to the sport I’ve known and loved,” Houia says. “I’ve tried to retire at least five times. When you coach high school, you can’t get on the field so it kind of stops you.”

Gebhart, who characterizes himself as a “general manager,” praised the support and cooperation from Hinsdale Central activities director Sally Phillip and athletic director Dan Jones.

As an unofficial sport, the club received permission to use Hinsdale Central logos, Dickinson Field for games and early morning practices, and buses for away matches.

Rugby players are known for tackling without protective equipment and scrums, where they push against each other for possession. Houia said the sport is not as dangerous as perceived.

Houia and Gambino also stress proper form throughout training. “What I always tell people, and what coach Houia reciprocates, is technique is everything,” Gleason says.

Tackling fundamentals began with players learning from their knees. They also regularly watch videos of international play to emphasize skills and develop strategy and mental preparation.

“(Their inexperience) was almost better because they didn’t have any bad habits. They really understand it,” Gambino adds. Grounding the ball past the goal line is known as a try. The score is worth five points and the kick two, compared with football’s six points for touchdowns and one for extra points. Like field goals in football, comparable rugby kicks are three points.

The rugby ball only can be advanced with lateral or backwards passes, never forward. While there are positions, everyone plays both ways, meaning anyone can score.

“These football guys who are always the offensive line, defensive ends, they get to be on both sides of the ball. And it’s constantly changing,” Gleason adds.

During his rugby conversion kicks, Garber is the only active player. They are taken from where the try initiated, resulting in varying distances and angles.

“It’s more relaxed (than kicking in football),” Garber says. “You kind of have to hit the back of the ball because it’s a little more circular.”

Houia hopes that the program will flourish and graduating players join club teams in college, such as Gebhart did at Illinois-Chicago. In the spirit of rugby, Hinsdale Central matches conclude with players from both teams gathering to have meals and visit.

“They can play this game until they want to stop,” Houia explains. “You can travel the world, and you’ll be part of a brotherhood, not just in the U.S. but worldwide. You say, ‘Hey, I’m a rugby player,’ and you have 20 friends, 20 brothers just like that.”