When Melissa Hamood’s daughter Yasmain first started playing lacrosse at Hinsdale Central High School as a freshman, it was not a school-sanctioned sport, which meant the players’ parents had to absorb most of the costs. And those costs were high, especially because the team traveled east or south for high-level competitions. “They weren’t doing any fundraising,” Hamood says, which was surprising to her. She asked herself: “Why are we just writing a check? What does that teach them?”

So she and a few other parents decided to put a fundraising plan in motion.

The goal was two-fold: First, the fundraising would help with costs for team attire, equipment, and travel, but Hamood and another mom, Stacy Boyle, thought it also would be good to donate some of the funds raised to local charitable organizations. 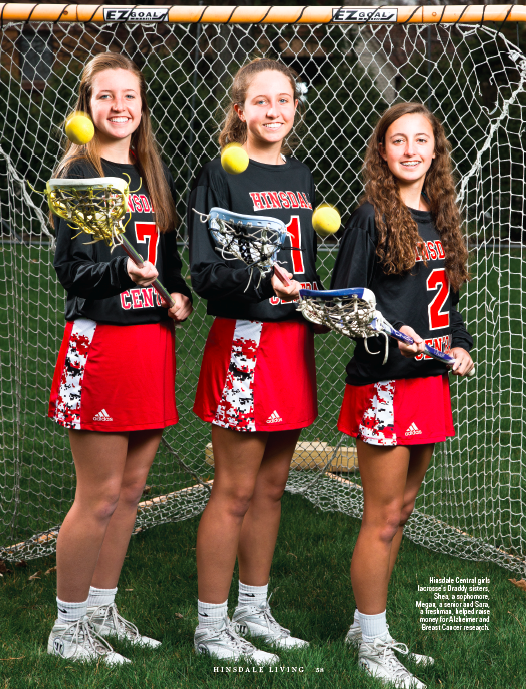 “With that title ‘high school student athlete’ comes a specific obligation. When you are an athlete, you are very visible in a community. You get something when you give back, and that’s great,” she says.

The fundraising started in the fall two years ago, well in advance of the spring season. It included a bake sale and t-shirt sales, followed by a bartending night, which featured athletic director Dan Jones as the primary mixologist. By the end of the first fundraising cycle, they had raised enough money to pay for team costs and donate money to the Hinsdale Hospital Foundation’s Open Arms Breast Cancer Outreach Fund and the Alzheimer’s Association. “One of our fundraisers raised $12,000,” Hamood says. “When you teach these kids something at a young age, it carries forward in their life,” she adds. The girls’ lacrosse team had such successful fundraising last year, one of the moms on the football team contacted Hamood this year for some advice and guidance.

Yasmain is a senior now, and this is the second year Hamood and Boyle have led the charge on fundraising. Two other moms—Amy Elliott and Becky Arbor—also played an integral role this year. And although Yasmain is headed off to play lacrosse at Penn State next year, Hamood’s commitment to the Hinsdale Central High School team hasn’t expired just yet; she has a daughter who will be a freshman next fall.

Susan Graddy won’t be done with team fundraising anytime soon, either. This year, she has three girls playing lacrosse at Hinsdale Central: Megan (senior), Shea (sophomore), and Sara (freshman). Graddy was happy to help her daughters get involved with the team’s fundraising efforts, especially in support of the Alzheimer’s Association. Both her dad and her husband’s dad battled Alzheimer’s before they died, and her mother is currently living with the disease. “We decided we would take on charities on a two-year cycle,” Susan says, which means next year the funds raised will go to a new organization (or organizations).

In addition to bake sales and t-shirts, the players have also held 50/50 raffles at games and partnered with Chipotle for a night where half of all sales went to the team’s fundraising efforts. Hamood has been instrumental in coming up with ideas for fundraising efforts, but Megan Graddy also says the team gets ideas by seeing what other clubs at school or the class boards do to raise money. “We do lots in the fall and spring to prepare for the season,” Megan says.

Hamood credits both the athletic director and the girls’ team coach Dan Hartman for being supportive of the team’s efforts, and she says everyone has pitched in to help. “When you get to high school, the parents don’t necessarily know each other, and you don’t get involved as much,” she says. “I wasn’t sure I would get the help from the parents. I cannot tell you how proud I am all of us. And more importantly, when kids see their parents [fundraising], it’s just becomes something they do.”

The best part about the team’s fundraising initiative is what it has done to the team as a whole. “It brought our team together,” Hamood says.