The target market for Julie Laux’s latest home is, well, everyone.

Not loyal to any particular movement or trend, this home sits just south of downtown Hinsdale and is a true labor of love. Laux, co-president of J. Jordan Homes collaborated with top experts to build this dream home. “Everyone is so excited about this project,” Laux says.

Laux, now celebrating her 10th year as a builder, reflects on the fortuitous events that lead her here.

After renovating her own home, Laux realized that she not only likes the work, but that she has a knack for it as well. She opened J. Jordan Homes, LLC with Nathan Cursio in 2006 as a building company that does everything from new construction to renovations.

She has since found her niche in the western suburbs. All of her connections and building experience lead her to her latest project on 424 South Washington—a tabla rasa with endless possibilities.

“We were just really excited about the location of the lot,” says Laux. “Given that we work with a lot of high end clients, we were excited to partner with our vendors and suppliers to give everybody the opportunity to do things that they don’t normally do.” 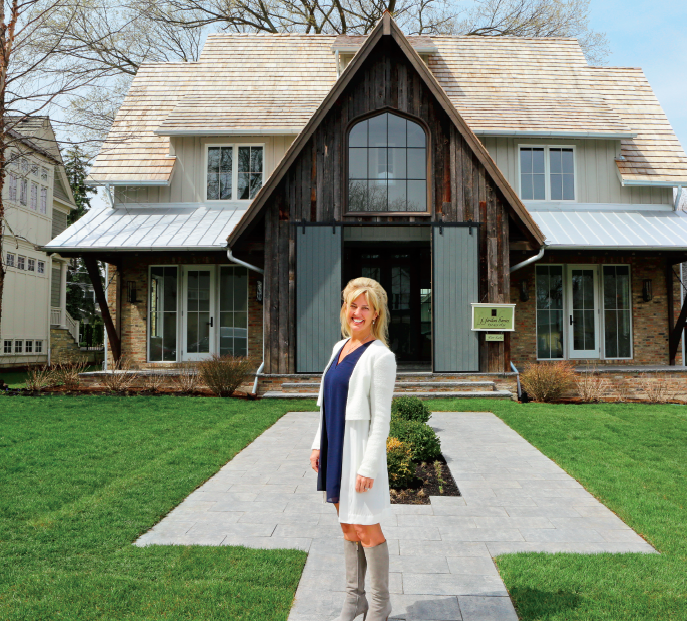 Laux describes the home as a contemporary rustic one with more than 6,000-square-feet of living space. Each contractor was able to meet with Laux individually and take chances on designs or features that the average customer may not know they love until they see it. Take, for example, the kitchen cabinetry.

“O’Brien Harris Cabinetry doesn’t do a lot of contemporary styling but she did for this home,” says Laux. “The kitchen hardware is from London and is really amazing.”

According to Laux, the home is finished well beyond what a spec home should be. and is being fully staged by Brynn Olson Design Group. “We wanted to do something that the marketplace hasn’t seen and push the envelope just a little bit,” says Laux.

From the interior design to the landscaping, the house details are exquisite. While clients may not be able to put a finger on it, they will know once they walk into the house that something is different.

“There is a higher level of detail, more like a subconscious detail,” explains Cursio. “It’s in the style of a home from the 1880’s but it’s been built for the modern consumer with impeccable craftsmanship.”

One goal of this home was to bring the outside to the inside; hence, the 10-feet by 5-feet picture windows in the family room. “There is an enormous amount of glass in this home,” says Laux. “There is so much light everywhere.”

They also used board and batten, an exterior construction methodology, on the inside of the house. Many of the same natural driftwood colors and materials were used both outside and inside. “Our three in-house carpenters did a beautiful job with the interior finish work,” says Laux.

Chicago Luxury Beds is staging every bed in the home by providing top-of-the-line beds, mattresses and bedding. Premier Landscaping created a covered basalt porch with with television and infrared heaters to complete the distinguished looking exterior of the home.

For Laux, though, one of the most exciting features of the home is the full installation of Gaggeneau appliances. Gaggeneau, a 350-year-old German company, is prevalent on the east and west coasts but new to the Midwest. “We used one of their pieces in a previous home and it was just so beautiful,” explains Laux.

After visiting the showroom in New York City, not only did Laux intend on using all Gaggeneau appliances in her spec home, she became a client herself.

“I’m crazy about their speed oven,” she says. “It’s a convection oven with microwave capabilities, which is not something you see out here in the Midwest.”

The inside of the refrigerator is stainless steel, not plastic like conventional fridges, and their cooktop sits on the countertop with controls mounted on the stone or wood countertops. “I love Subzero and Wolf and I use them all the time, but it’s nice to try new things,” says Laux. Gaggeneau will soon open a show room in the Merchandise Mart in Chicago.

Laux’s favorite part of this project has been the level of collaboration with some of the industry’s best.

“Everybody has invested themselves in this home and there has been so much creativity involved,” she says.

“We couldn’t be more excited.”