For Annie, the sun will come out tomorrow. But for Paula Taylor and the Stage Door Fine Arts Program, the spotlight shines today. With its ever-growing popularity, Stage Door Fine Arts has become the go-to theatre company for many patrons and aspiring actors in the western suburbs.

Fresh off the successful production of Mary Poppins and during a rare moment of relaxation, Paula Taylor, co-founder of Stage Door Fine Arts, sat down with Hinsdale Living to reflect on her journey from aspiring actress to director of a blossoming theatre program. 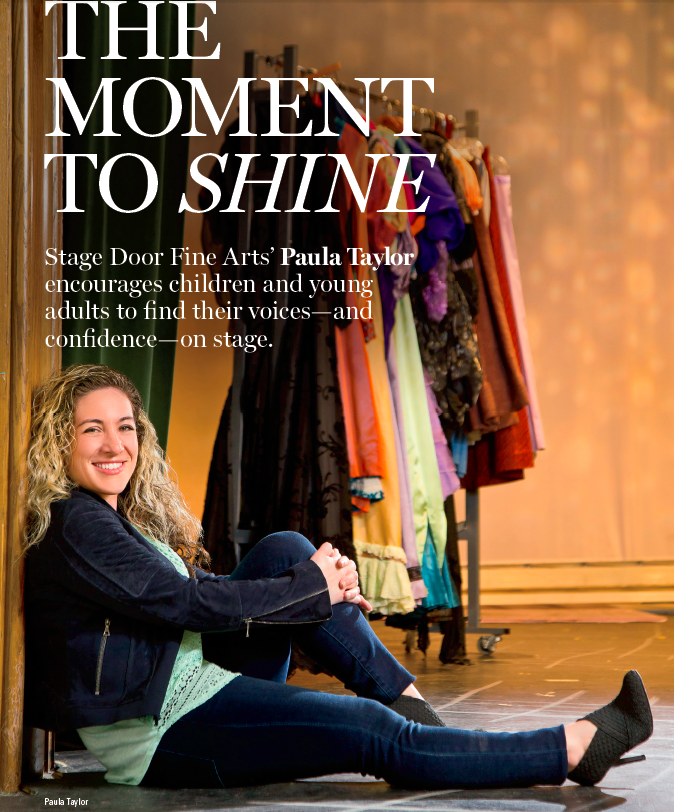 Hinsdale Living: How did you get your start in theater?

Paula Taylor: My parents put me in theater classes when I was in kindergarten just so I would feel comfortable speaking publicly. Eventually, I chose acting over other activities and then majored in Music Theater at Millikin University. After a while, I realized I enjoyed the directing and administrative side of things more than performing. But when I moved to Chicago in 2004, I still wanted to be an actress.

How did you start directing in the western suburbs?

Don Smith, co-founder of Stage Door Fine Arts, is from Chicago and he used to perform out here. I taught piano lessons and choreographed shows in Oak Brook. I realized I had a knack for directing, so Don and I started our own company on a whim, just to put on a show and see what happened. It all grew from there.

We called ourselves “gypsies” because we constantly moved locations. We rented different facilities, booking wherever we could at the time. We had about 80 actors in two productions—one with younger kids and one with older kids. The shows went over so well that decided to do another. We built the sets for those productions in my garage in the city. We had college kids helping us, too. Eventually, some productions grew to having to triple cast them. We used to have all the kids, all 120 of them, rehearse at the same time in the Field House of The Community House. It’s funny to look back on those days.

We are currently located at The Community House and it’s great. We have our own warehouse to build sets, store props, costumes, and things like that. Don moved to New York this past fall, still working remotely as Co-Artistic Director, also setting up connections and experiences out there. Since he is there, we have two more directors, Katie Rae and Nick Perry, who are co-directing the spring shows with me. We had 180 actors audition for for the younger show, grades 2-8, and about 35 high school and college students for our older kids’ production. The program is really growing.

What are you showcasing this spring?

How do you think kids benefit from musical theater?

What other programs does Stage Door Fine Arts offer besides theater performances?

We offer acting classes through the program guide at The Community House. There are three different acting classes right now. We want that to grow more and more. All of us teach private music lessons, too. For example, I teach voice and piano. Katie teaches voice. We are trying to build a dance program through Nick who is an amazing dancer.

How can actors get involved with Stage Door at this point in the program?

If you’ve missed the opportunity to audition for Annie or The Addams Family, there are wonderful opportunities for the Stage Door Fine Arts summer program. The summer productions are Schoolhouse Rock for all ages, the musical 13, which will be directed by two members of the original Broadway cast, and Heathers, which will be performed in a Chicago theater.

What’s the best part about your job?

That’s a tough one! My ultimate favorite part is when a kid begins with us at a young age and then we see them go off to college and beyond and see how much they’ve accomplished. I become really close with the kids. They call me Paula, not Ms. Taylor, or something formal. We are like a family here. I just love to watch them grow.