A four-time state champion and record holder for the Red Devils, Reyes has dual citizenship like his father, Raul, and has represented Panama internationally as a member of its junior national team.

The next step could be the upcoming Summer Olympics in Rio—if he can achieve the necessary time cut in the 100-meter butterfly by July 3.

“I think I can do it. I just need to train really hard and do everything I can to make myself in the best shape possible,” Reyes says. “If I’m not going to make the Olympic team, I’m not going to be terribly hurt, sad, or depressed. I know I put in all of my effort to achieve the goal.”

Reyes has been at this a long time. He began swimming at age 3. After Reyes won multiple Illinois 12-13 age group titles—and broke long-standing state and regional records in the 50-meter fly— his focus turned exclusively to swimming. He first trained with Raul, who swam at West Point as a freshman.

“I love competing. I’m not a fan of practice, but I love to compete,” Reyes says.

Reyes’ 100 fly was the nation’s fastest this season, according to the National Interscholastic Swimming Coaches Association. His 50 split leading off the 200 free relay (20.40) was No. 12, while both championship relays were among the top 15.

“I think that speaks volumes for how well he swam, let alone how talented our team is,” Hinsdale Central coach Bob Barber says. “The bigger the meet you put him in, the greater the performance you can expect.”

“It makes me feel like I have to train harder,” Reyes said. “I think it gives me an advantage, because I’m smaller and more compact. I’m lighter and have more fast-twitch muscles.”

Reyes was born in Peru. At 6, Reyes moved to Hinsdale from Florida when Raul took a job with McDonald’s and now lives in Burr Ridge.

In 2011, he competed at the Macerata Olympic Youth Games in Italy. He was eligible because the father of his mother, Marisa, is from Italy. 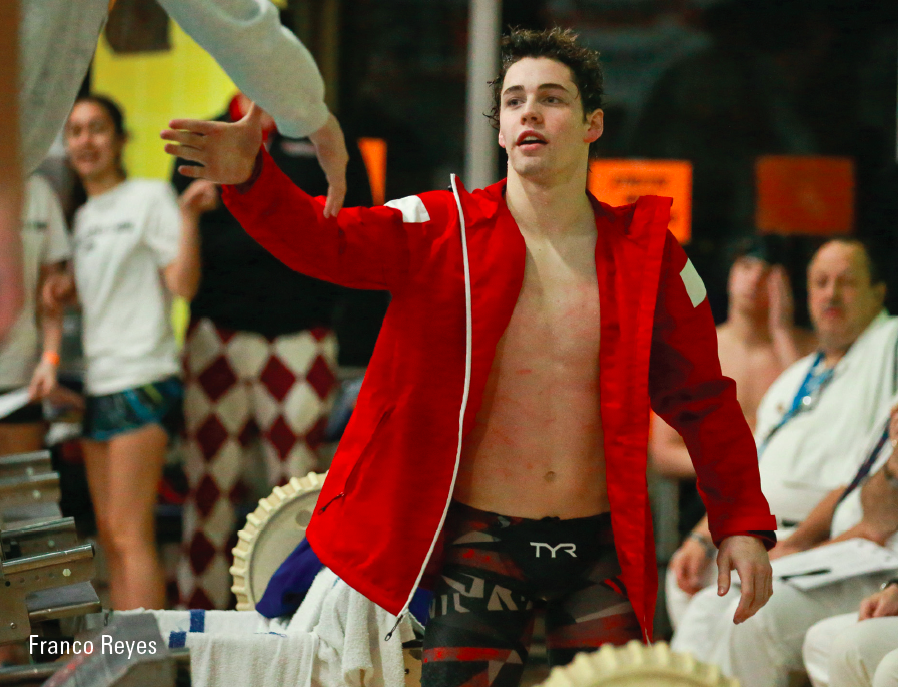 Reyes has visited Panama numerous times. Around age 13, he met several relatives and his father’s former club swimming coach. The idea of swimming for Panama arose and grew with his talent and team camaraderie—and his ability to understand and speak Spanish. Reyes represents the La Salle swimming club in Panama City.

His international debut with Panama came in 2013 at the XXVII Central American and Caribbean Championships in Costa Rica. He won three races in the 13-14 boys division: 50 fly, 100 fly, and 50 free.

“I was excited to represent Panama. It’s a great group of kids I met up with,” Reyes says. “I love the country. I have a lot of family there. I’m happy when I’m there.”

Other events have taken him to China, Mexico, and Barbados. At the 2015 FINA World Aquatics Championships last August in Kazan, Russia, Reyes was 39th in the 50 fly (24.60) and 46th in the 100 fly (54.49)—the fastest event times by any Panamanian swimmer on the international stage.

To reach Rio, Reyes believes he must achieve the A cut of 52.36.

“It would be amazing if I made this Olympics, but my main focus is on Tokyo [host city of the 2020 Summer Games]. I’ll have four years to get bigger, stronger, and faster and show the world what I can do,” Reyes says.

“Every time I’m on the airplane or warming up the first time, seeing the championship pool or youth Olympic pool, it really takes my breath away. I’m amazed that I made it here, but I can’t really be that way when I’m on the blocks or about to swim.”

When Reyes competed in Russia, his father was in Panama watching on the Internet with family and friends in the middle of the night.

When Reyes debuted with Panama in Costa Rica, he continued a long-standing junior national team ritual.

“As a first timer, they chop your hair off (badly) and you have to swim like that for a while,” Reyes’s father Raul says. “They did the same thing with me 40 years ago in the same meet and the same event. So that was very emotional for us.”