There’s a mini-wrestling mat in the basement of their Hinsdale home. It’s carefully positioned between the air hockey and pool tables.

Over the years, it served as one of the training grounds for the Allen brothers: Jack, Brian, and Matt. It was a place for intense competition and brotherly tough love.

“Every time I’d have a fight with Brian, I’d run to Jack and he’d help me out,” recalls Hinsdale Central senior Matt Allen. “If he wasn’t there, I’d usually get my butt whooped.”

Playing football in the backyard also brought out the competitive juices. It got physical.

But there’s no reason to feel sorry for the little bro. Not now. Not ever.

Matt Allen is pretty much on par with his two unbelievably talented siblings.

On February 20, Matt became the third Allen to claim a state wrestling championship, when he defeated Lincoln-Way Central senior Bryan Ditchman 3-2 in the 285-pound title match at the IHSA Class 3A meet in Champaign. A year ago, he was the runner-up in that weight class. 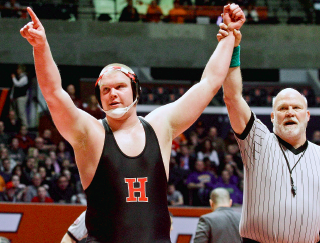 Following in his brothers’ footsteps is just fine with Matt.

“It hasn’t been too big of a burden,” he says. “Personally, those are pretty nice [steps] to follow.”

Matt began following his brothers to youth wrestling meets at Hinsdale Central with his father, John, a former heavyweight wrestler for Purdue University.

Uncle Jim Zajicek, John’s stepbrother, is Hinsdale Central’s former head coach and a volunteer assistant for current head coach Jason Hayes. Their mom—Leslie—also is in the heat of action as a photographer. Her framed work is among the sons’ most treasured mementos.

“After I hugged my coaches and my uncle (at state), she was the first one I hugged,” says Matt. It’s an embrace that Matt won’t soon forget. Last year, he lost the final 1-0 to Marist’s Jake Ford to finish the season 41-3.

“It didn’t hurt as much as watching Jack and Brian lose [their championship matches]. There was nothing I could do for them. I knew after I lost, it was my fault,” says Matt.

“I’ve kind of been dealing with that pressure my whole life so it didn’t [put more on me this season],’’ he adds. “I think it helped me a lot with things to do and what not to do.”

This season, Allen made sure that he was in tremendous shape. He ended up 45-1. He split two matches with Hinsdale South senior and two-time Class 2A champion Josh King. “For me to say I’m happy is an understatement,” says Hayes. “Imagine the pressure for Matt. He wasn’t winning only for himself but also a family legacy. I feel blessed every day I had the opportunity to coach all three of them.

“Matt never ran out of gas,” the coach adds. “He could maneuver out of positions like Gumby.” Wrestling, of course, is only half the story with the Allen brothers.

Just like his brothers, Matt (6-foot-3, 280 pounds), an offensive lineman, will play Big Ten football at Michigan State. He’ll get a chance to suit up with Brian, who made 12 starts and made all-Big Ten as a sophomore last fall. Two years ago, Brian was a first-team freshman All-American. Jack, meanwhile, is considered one of the best centers in the upcoming NFL Draft. A 2015 Rimington Trophy finalist, he is projected to go in either round three or round four. He was a two-time first-team All-American for the Spartans. Brian made the trip to the 2016 state wrestling meet in Champaign. Jack couldn’t. He was training for the NFL Combine.

He wasn’t as offensive as Jack and I were, but in close matches he always found a way to win.”