But for 23 students from the Mulhern School of Irish Dance, the whole world may actually be watching them perform on March 17 in Glasgow, Scotland.

Are they nervous? Perhaps. Are they excited? You bet. And no one feels greater satisfaction than the two women who made it all possible.

When sisters Eileen Mulhern O’Kane and Coleen Mulhern Malloy opened their school of Irish dance, neither one thought they would be where they are today—sending 20 girls and three boys to the World Irish Dancing Championships. 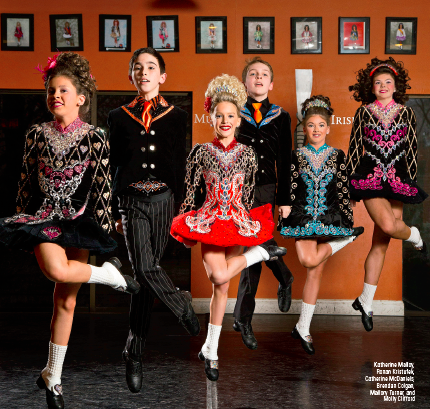 Eileen and Coleen grew up on the South Side of Chicago, the youngest two of seven children. “Eileen and I started when we were 3 and 4 years old,” explains Coleen. “We stuck with it and went all the way to competing in the World Championships.”

One of the biggest influences in their Irish dancing careers was their very first instructor—the Lord of the Dance himself—Michael Flatley. “We were his first students,” says Coleen. They both keep in touch with him to this day, even recently supporting his current performances on Broadway. “He brought Irish dance to the forefront for everyone,” says Eileen.

Even with Flatley as their primary instructor, the Mulhern sisters never thought they’d teach Irish dancing. That journey began rather haphazardly when Coleen was planning her own wedding. “My nieces wanted to do the jig at my wedding,” explains Coleen. “I remember looking for a school for them but nothing worked out, so I decided to teach them myself.”

From then on, Coleen began instructing other local children and her newfound business began to grow. “I initially taught from my parents’ basement,” says Coleen. “And just by word of mouth, it grew.”

Their school has now expanded to 120 students ages 3 to 21, plus a recently opened branch in Minnesota. For the past four years, Eileen and Coleen alternate every Wednesday flying to Minnesota to teach students there. Why Minnesota? The answer is simple. “They recruited us,” explains Coleen with a shrug. “They asked their dancers if there was any school in Mid-America they wanted as teachers and the students answered Mulhern.”

The Mulhern sisters were both humbled and grateful to be selected and have enjoyed teaching the Minnesota branch ever since. Of the 23 World qualifiers, five are from their school in Minnesota. Much of that is attributed to their personal dedication to each student. “We teach every dancer—from the tots up to the champions,” says Coleen. “I believe our success lies in the consistency of our teaching.”

Both branches compete regularly in approximately a dozen or more feises (pronounced fesh) as well as Regionals, Nationals, and World Competitions. Students practice twice a week in the “off season,” but practice up to four times a week when prepping for a major competition.

For the most recent Nationals and Regionals competitions, Mulhern School of Irish Dance was the top Mid-America competitor, a huge accomplishment given that competing schools such as Trinity have well over 500 dancers.

The World competitions are no longer held only in Ireland, given that Irish dancing is now being taught all over the world in places like China and Japan. “Your goal as a dancer would always be to go to Ireland for the Worlds,” says Coleen. “But because Irish dancing is renown, they started to rotate where the championships are held.”

The World competitions begin the Sunday before Easter and finishes on Easter Sunday. Each age group has its day of competition starting youngest to oldest, meaning the oldest dancers will compete on Easter Sunday. Competitors receive awards the same day they compete and are given either gold, silver, and bronze medals like the Olympics.

The top three winners are also awarded a silver globe, donated by Michael Flatley, and they get to keep the globe for one year, much like the Stanley Cup.

Eileen’s own son placed third in the World Championships in 2012 in Belfast, which is the highest placement so far for the Mulherns. “Last year we had a 5th place girl,” says Coleen proudly. “It’s a big deal to get a medal at Worlds.”

And while having students compete in the World Championships is an accomplishment for the Mulhern sisters, nothing is more rewarding to them then watching their students flourish through dance.

“It is the most rewarding thing I have ever done in my life,” says Eileen. “It’s not just watching our students win competitions, but seeing the confidence and personal successes that I love.”

The Mulherns have watched shy students blossom and awkward students gain confidence through rehearsals, performances, and competitions. “What the students do is a confidence builder for life,” says Coleen. “The light goes on for each dancer at a different time and it’s amazing to see.”