During the summer, Wiggins’ father had died. As a tribute, senior Evan Floersch played with customized cleats that—on the bottom—bore his number (11) and these initials (HRW).

Those were the initials of Wiggins’ father. “All of those types of things remind me why I do what I do,” Wiggins says.

Wiggins has been coaching soccer at the Hinsdale Central for 22 years, including the past 14 years as head coach.

With Wiggins at the helm during that 2014-15 campaign, the Red Devils won their first state championship since 1975. The past few months also have been rewarding for Wiggins. He claimed his 300th career win on August 29. Then, after the season, he collected some big-time accolades. He became only the fourth person to be named Coach of the Year twice by the Illinois High School Soccer Coaches Association. Wiggins also was selected to coach at the National High School Boys All- America Soccer Game in Raleigh, North Carolina on December 5. 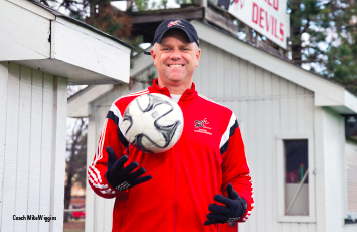 “It’s been a lot of fun, but it’s more about the people,” Wiggins says. “I’ve worked with a lot of great, great people.” By 2002, when Wiggins replaced Skip Begley as the Red Devils’ head coach, he brought a significantly different coaching perspective.

Wiggins had been a soccer star at Downers Grove South and became its head coach in 1994. He took the Mustangs to back-to-back state quarterfinal appearances during eight seasons.

“When you’re younger, there’s an extreme urgency to prove yourself,” says Wiggins. “I wanted the program to be successful.

“Since I’ve been at Central, I think what I’ve really come to appreciate is just enjoying every day, enjoying every opportunity,” he adds. “You really can’t tell somebody that you need to slow down and enjoy it. You just have to experience it.”

Wiggins played soccer at Illinois State, where he met his wife, Bonnie (Higgins), the 1988 IHSA girls gymnastics co-state champion on vault. Wiggins even played a handful of games with the Chicago Power.

“I’ve been fortunate to be around really, really strong personalities and very successful people,” says Wiggins. “They helped me kind of mold into the person I am, the coach that I am.”

Mentioning the 2014 state title game creates a flood of memories for Wiggins.

When Will McGowen scored the lone goal with 7:52 left in regulation, Wiggins turned around to see an enormous crowd with a deafening roar. Moments after the 1-0 victory over Normal Community, goalie Wes Bergevin blind-sided him with a hug.

Wiggins said it was probably his only team where all of his players listened and impeccably understood game plans throughout the season.

“I showed up 15 minutes early for the interview, which is what Coach Wiggins always wanted us to do for soccer,” says Walker. “They complimented me for that.”

Walker says that one of Wiggins’ best attributes is his ability to cater his coaching to each individual player.

“Another strong attribute would be his commitment to the game,” says Walker. “Without his research and faith in us, we would not have had faith in ourselves. Without him, that entire (2014 title) run would not have been possible.”

Wiggins remains enthused and enlightened about coaching. At the All-America Game, Wiggins delighted in picking the brains of nationally renowned high school coaches.

For more than 10 years, Wiggins also has been an AYSO certified regional coach trainer to help volunteers coach younger players.

“I can’t see this stopping,” Wiggins says. “I told Bonnie the other day it’s amazing that it’s been 22 years. I told her that I’m ready for the next 22.”