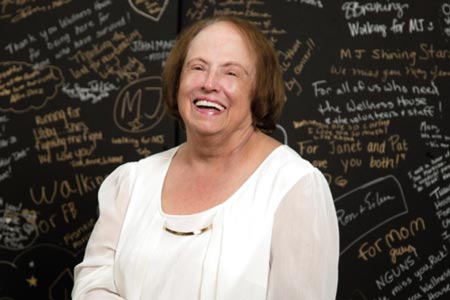 Three weeks after Lorraine Wolfe’s husband died of cancer, she sat in a room with 20 other people at Adventist Hinsdale Hospital, looking for support. Some of the people alongside her were current cancer patients; others were recovering patients or supporting family members. “People were alone,” she says. “That was the need that we saw.”

Wolfe (pictured) says in a sense she was lucky. She had doctors in her family and children by her side—the youngest of whom was 15 at the time—but the early days of the diagnosis were quite difficult. “We knew nothing about cancer,” she says. “I felt I was supposed to take my place and lead my husband, but we were just there to help.”

This was the late 1980s, and online support groups or basic information about nutrition or treatment plans couldn’t be accessed or found with a quick Google search. More importantly, people sometimes need to talk to someone who’s going through the same challenges as them. “What we envisioned was a place of support where anyone can get help,” she says.

That place became the Wellness House. Wolfe, with the help of friends and family members who believed in her mission, solicited enough money to officially open the Wellness House in August 1990 in a small house on County Line Road in Hinsdale. Basic programs at first included support classes, but the offerings quickly grew to include nutrition programs, groups for specific cancers, survivor support groups, relaxation and yoga courses, and eventually children’s programs. That small house on County Line Road was rebuilt a few years after opening, and then expanded again in the early 2000s with an addition that brought the total space to 15,000 square feet.

Today, the Wellness House is celebrating its 25th anniversary. In late July, an anniversary kickoff barbecue event had 300 people in attendance. To date, the Wellness House has had thousands of people come through the door and participate in various programs for patients and survivors. But Wolfe reiterates that it is not a hospital, and none of its staff members give medical advice regarding treatment. Rather, it’s a destination for support, education, wellness training, and community—all at no cost to visitors. “Getting diagnosed with cancer often feels like a death sentence. It’s like a black blanket comes over you,” she says. Without support, the diagnosis can be overwhelming. “Wellness House breaks down the barrier,” says Wolfe. “This is a home.”

Wellness House has been an epicenter for cancer support in Hinsdale and the Chicago area for two and a half decades now, mostly as a physical location where people can go for group programs, exercise and nutrition classes, counseling, and more. The major initiative now during the 25th anniversary year aims to expand its services with more remote, technology-based outreach programs. The initiative is called “Wellness Beyond the Walls,” and new details are coming soon about what the complete program might look like and what partnerships are helping to make it happen, but a few questions on the website hint at some of the program’s key focus points: “What if I am able to learn how to prepare healthy meals when it works best for me? I already have a lot to juggle with work, family, and treatment? And what if I could attend family sessions, a fitness class, a nutrition consult or a support group at a Wellness House program closer to my home?”

Wolfe says she never could have anticipated the extent to which the Wellness House has grown in its 25 years. It’s first and foremost a community gathering place where people with cancer or those family members affected by it can come and find support and other people who are going through the same thing. “You need someone to say you are in charge,” she says. “And sometimes you just need friends.