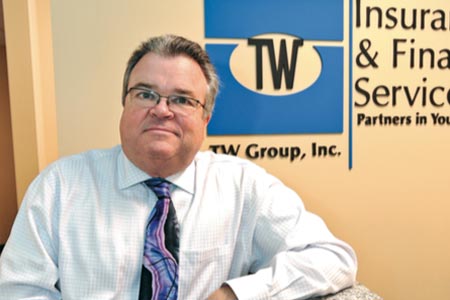 It was 1967 and a tornado had just ferociously ripped through the southern suburbs of Chicago. Thirty-three people were killed. Hundreds of homes were damaged or destroyed. And one South Side teenager was forever changed.

Because on that particular day, Thomas J. Walsh observed as his father put his knowledge of insurance into action. He watched his dad’s then Hinsdale-based Company—Tom “Insurance” Walsh and Associates come to the rescue for countless Illinois residents. And he dreamed of the day he would be able to do the same thing for his clients.

“I have watched as homes were rebuilt after a fire and I have delivered some of those much needed claim checks and I have seen life insurance policies help put kids through college,” says Walsh, current President and Principal of TW Group, Inc., an independent insurance and financial services agency now located at 850 N. Cass Avenue in Westmont, Illinois. “I have seen the good that this industry can do for people.”

And although his dear father passed away from cancer just six months after Walsh went into the insurance business with him in 1980, his legacy flows freely throughout TW Group, Inc., a company which specializes in a wide range of insurance offerings, including everything from auto and home insurance to life and health insurance. In fact, Walsh says that he finds himself still thriving on an upbringing within a family whose roots grew deep within the southwest side of Chicago, prospering from family dinners and appreciation for a hard day’s work.

“Our agency was founded on Christian-based principals of always being trustworthy and fair,” says Walsh, who initially began his insurance career with Travelers Insurance Company shortly after his 1975 graduation from St. Norbert College. “It’s what my parents taught us. There were 10 kids in our family and my parents would work hard. I remember on Tuesdays that my Grandma Peterson would come over so my mom and dad could go to dinner and then they would go to work.”

To this day, it’s still a family affair over at TW Group, Inc.

“One of my favorite parts is working with our customers and our staff,” says Walsh, who works every day alongside his wife and business partner Mary. “Virtually everyone on staff is licensed for insurance and we believe in what we do.”

While Walsh, who has received designations such as Chartered Property Casualty Underwriter (CPCU), Certified Insurance Counselor (CIC), and Accredited Advisor in Insurance (AAI), says he is well aware that the insurance industry has changed greatly since his dad went to business all those years ago, he finds that his customers still thrive on personal attention.

“The ways in which people find an insurance company has changed greatly,” says Walsh, who serves as a member of the Westmont Chamber of Commerce and Tourism Bureau, Hinsdale Chamber of Commerce, and the Darien Chamber of Commerce. “They still want an agent that they can pick up the phone to talk to, and an agent with a hand to shake. Those sorts of things will never change.”