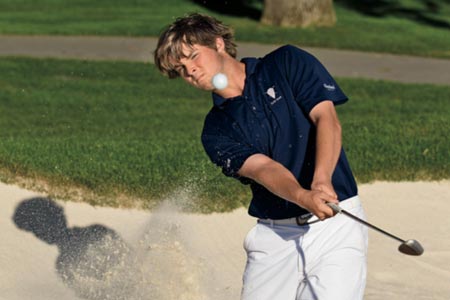 After two straight weeks on the road for summer golf tournaments, Hinsdale Central High School junior Brendan O’Reilly should have been exhausted.

Yet by 11 a.m. the next morning, there he was watching his father, Kevin, in a members’ tournament at the Butterfield Country Club in Oak Brook.

“I’m a big believer in trying to take a minimum of days off. I’m trying to work every single day because if you don’t, you can slip,” O’Reilly says. “I want to be prepared to handle everything that happens on the golf course.”

O’Reilly’s game and personality make him an important part of the Red Devils’ hopes for a fourth consecutive Class 3A team state championship this fall.

O’Reilly earned his first berth to the U.S. Junior Amateur July 20-25 in Bluffton, S.C., and has tournament experience on both coasts of the United States, Canada, and Puerto Rico.

He plays and practices tirelessly—no matter what.

“If it’s raining or really windy or cold, I make it a priority to practice those days,” O’Reilly says. “Whenever it’s really windy, I almost feel more comfortable because I have shots for [the conditions].”

In 2014, O’Reilly’s 69-stroke season average for Hinsdale Central was among the two lowest under long-time head coach Jess Krueger.

“It’s awesome having so many guys on my team that can challenge me every single day,” O’Reilly says. “We all want the No. 1 spot on our team. Our main goal is to win every single tournament we play.”

As O’Reilly gets bigger and stronger, longer drives complement his solid putting and short game.

A self-professed grinder mentally, he believes important traits for golf parallel those in life—hard work, patience, and resilience. Exhibiting them consistently sets him apart.

“Mentally, he’s stronger than anyone out there,” says Mike Carbray, Director of Golf Instruction at Butterfield. “Nothing fazes him. His demeanor never changes, and that’s what is appealing to all of the college coaches. As good as he is a golfer, he’s a better kid.”

“He’s mentally strong as well as physically gifted,” Krueger adds. “He’s just very, very adult in the way he carries and presents himself. He’s very humble. He will walk up and shake your hand, look you in the eye. He’s very adult in that sense.”

Carbray also is Director of Instruction at the Golf Fitness Human Performance Studio, an indoor winter golf facility in Westmont.

In his younger days, O’Reilly and his father were at the facility so often before Carbray opened that Carbray finally gave Kevin O’Reilly a set of keys.

Now that he can drive, Brendan O’Reilly uses those keys.

“He (also) comes after school and practices. He helps the younger kids. He’s a role model to them,” Carbray says. “I’ll be on the computer at 9 p.m. and he’s working on his own, kind of in the dark, trying to get better.

“I’ve tried to tell him to take a couple of days off, and now I don’t bother.”

In 2013, O’Reilly won the Illinois State Junior Amateur in a two-hole playoff. When O’Reilly won again in 2014 by one stroke, he became the first back-to-back champion in its 45-year history.

At the U.S. Junior Am, O’Reilly finished fourth in preliminary stroke play (140) and reached the final 32 in match play.

“I’ve played really solid in big tournaments. It gives me a ton of confidence that I belong on the big stage,” O’Reilly says. “But you’ve really got to pace yourself. I really had to stay hydrated and focused because every day mattered.”

Even hard work can use a little superstition. Whereas Tiger Woods wears red shirts for final rounds of tournaments, O’Reilly uses a more stringent pattern.

“I always wear the same shirts. I have a green shirt I have worn almost every single tournament,” O’Reilly said. “I have benched a couple of shirts—putting them back in the closet for a while.”