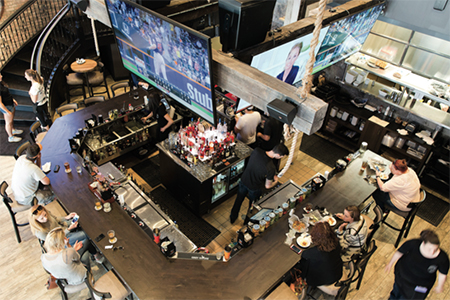 Fuller House is happening. For real. We could hear it from down the block as we approached on a Wednesday night a week after they opened their doors. The waitress sheepishly told us we were looking at a two-hour wait. Fuller House is the new place to be.

With a 120-inch LED screen lighting up half the room with a baseball game, the sound of a huge crowd of people locked in excited conversation, and a steady stream of sing-a-long classic rock and 80’s hits blasting on the sound system, Fuller House has an undeniable energy. Sam Vlahos and Patricia Vlahos-Segretto, two siblings under 30, have built a cool city bar right in the heart of Hinsdale.

The first floor is dominated by a massive bar in the round with about 20 stools and standing patrons stacked two-deep ordering from a selection of 12 draft taps of craft beer, one of their exceptional craft cocktails, or from the core of their theme, one of their 20 brands of whiskey. 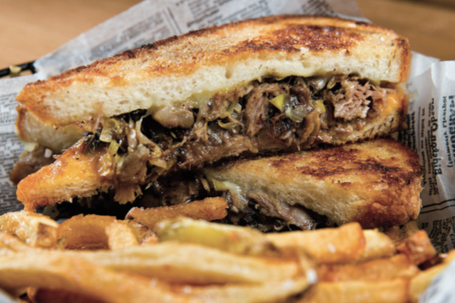 Though it’s undeniably a pub atmosphere, the décor is a cross between a gothic manor house and a beautiful, reclaimed American barn. A lot of the drama comes from a winding filigree iron staircase to the second floor where more booths and tables are laid out for larger parties. A colossal wooden beam frame hangs from the ceiling by thick decking rope and ancient hooked pulleys.

Seated at a tall boy next to the bar, we thought we’d start with one of the all time classic bar foods: Nachos. The housemade chips are tantalizingly crispy and covered in a layer of creamy pimento cheese sauce and pepper jack. These simple twists immediately elevate the flavors way past usual bar fare, but then they add a little substance with white beans, tangy spice from pickled jalapenos and pickled onions, and top the whole thing off with guacamole, pico de gallo, and a touch of cilantro lime crema, everything made in house. This savory appetizer is so good you’ll have trouble stopping when common sense reminds you that entrees are still coming. 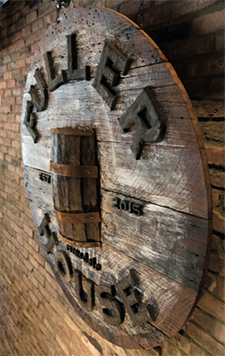 The mouthwatering brisket in the Brisket Grilled Cheese sandwich is smoked in-house and paired with melted yellow cheddar, white cheddar, and caramelized onions, and bookended by scrumptiously grilled sourdough bread. Though we heard that their five specialty burgers have been flying out of the kitchen faster than their beef distributor can keep up with, of the sandwich selection, this sounds like the frontrunner. We decided to try the fries Animal Style. Taking their cue from In-N-Out Burger, the mecca of West Coast fast food burger chains, Animal Style fries arrive coated in melted cheddar cheese, caramelized onions, and Animal Sauce—a version of Thousand Island dressing. Like the rest of the menu, this tactic by Chef Cesar Lopez and Sous-Chef Kory Kovel is meant to push every flavor to maximum potential, taking traditional American comfort foods and elevating them to full-on contentment food.

The fish tacos are founded in the tropical flavor of grilled Mahi Mahi. The thick slices of flakey fish mix with a tint of cucumber coolness in the citrus slaw, including a savory tang from a full segment of mandarin orange, and topped with a drizzle of cilantro lime crema, all wrapped in flour tortillas. The orzo salad works as a simpatico side to the light summery flavor of the tacos, reveling in Greek flavors from olives, olive oil, feta cheese, and orzo pasta creating a creamy, zestier version of a traditional pasta salad.

As the sibling-owners of Fuller House come from a history as partners in the Bricks Wood Fired Pizza franchise, there’s no surprise that a section of their menu is devoted to thin crust, Neapolitan-style pizzas straight out of a wood fired oven. Their Margherita pizza is a classic. Their handmade dough is fermented for 48 hours before stretched and topped with extra virgin olive oil, tomato sauce, garlic, shreds of basil, and melted slabs of mozzarella cheese. Soon, in addition to the five pizzas always on the menu, Fuller House intends to implement a rotating specialty pizza of the week.

Also from their wood fired oven is the Strawberry Shortcake dessert. A layer of wood smoke-tinged strawberries line the bottom of a petite cast iron skillet and a fresh buttermilk biscuit is halved around a healthy scoop of vanilla bean ice cream, topped with whipped cream and a mint leaf. It arrives oven-warm and the smokiness infused in the strawberries tames a little of the sweetness, making this a more nuanced version of the classic dessert.

We saw families eating outside at the sidewalk tables, groups of guys gathering to see the game larger than life, girls nights out, sequined tops and all, and couples leaning across tables to hear each other over the peppy music. Currently only taking reservations for parties of six or more, I’d get a group together and land a slot, or be ready to chill for a bit with some pre-dinner drinks, because this is Hinsdale’s new place to be.

– By Jake and Eliza Jarvi // Photography by Joel Lerner